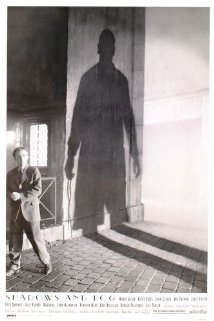 In SHADOWS AND FOG, Woody Allen wraps his anguished everyman and all-star cast in a German Expressionist allegory about the futility of trying to defeat death. Regrettably, the film presents a naive perspective on sex, love and marriage, even suggesting that prostitution is liberating. Also, a priest is depicted as greedy, while a clairvoyant thanks God for his "miraculous gift." Regrettably, much of the acting is amateurish.

In SHADOWS AND FOG, Woody Allen wraps his “confused nobody” character and all-star cast in a German Expressionist costume. The film takes place in a town bedeviled by a murderer who either strangles his victims or slashes their throats. Max Kleinman is drafted into an vigilante group who have “The Plan” for apprehending the killer, but never is told what his part is. The killer represents Death: an unknown, inscrutable and invincible enemy. “The Plan” is aimed at overcoming death. Because it is impossible for man to conquer Death, the vigilantes divide into small groups with different plans, eventually resorting to violence against each other. Near the end, the killer is restrained by the Magician, but his victory is an illusion.

SHADOWS AND FOG presents an annoyingly naive perspective on sex, love and marriage, even suggesting that prostitution is liberating. As in Allen’s other films, the subject of God is pervasive, but is treated with ambivalence. A priest is depicted as greedy, while a preposterous clairvoyant sinks to his knees and thanks God for his “miraculous gift.” Regrettably, unlike his previous work, much of the acting and direction in this Woody Allen film is amateurish.