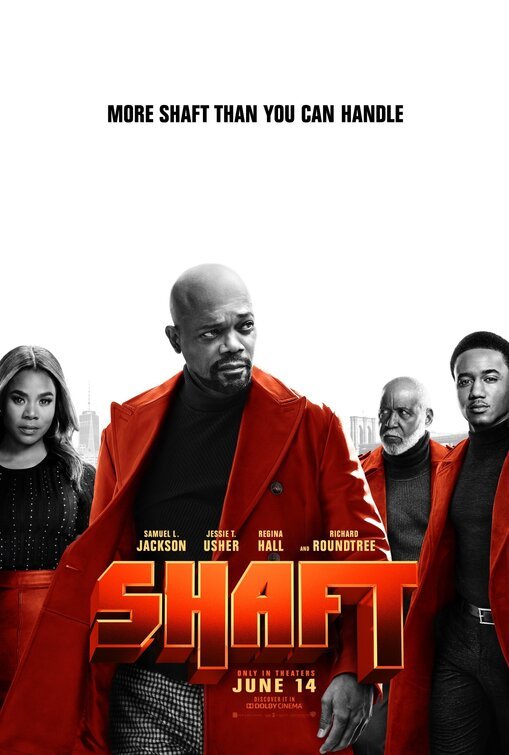 SHAFT (2019) follows JJ Shaft, a 25-year-old data analyst for the FBI who loses his best friend, Karim, to a supposed heroin overdose. However, something about his death and the police report don’t add up, so JJ starts doing some research. His investigation leads him to the underground crime world of Harlem, where he’s forced to seek help from an expert, his absent father, John Shaft, Jr. JJ hasn’t seen his father since before he could remember, but the unlikely pair join together to solve the case.

SHAFT is the third movie with this title. The first two focused on the two older generations of John Shaft. The first one starring Richard Roundtree is a classic, but the series seems to just keep getting worse. The dialogue sometimes borders on cheesy, making the comic relief some of the best parts. The driving force ends up being rather empty and unsatisfying. Also, the movie’s immoral and objectionable content is astronomical and includes about 300 or more obscenities and profanities, plus much crude dialogue. This new SHAFT movie is one for media-wise moviegoers to avoid.

(PaPaPa, PC, Ho, LLL, VVV, SS, NN, AA, DD, MM):
Dominant Worldview and Other Worldview Content/Elements:
Very strong pagan worldview where Man is the judge and deliverer of justice, the main characters seek their own type of justice and rebel against “the man,” there are little to no consequences by the law or otherwise to their actions, with minor themes involving political correctness as one character is constantly making remarks needing to be corrected, plus some homosexual references when a male receptionist flirts with the main male characters, and character’s father makes jokes wondering if his son is “gay” while son’s boss complains that his 7-year-old daughter wants to be called “Frank”
Foul Language:
At least 285 obscenities (at least 133 “f” words), nine strong profanities Jesus or Christ and GD, several light profanities, at least 10 racial slurs, many inappropriate and crude jokes, two obscene gestures, and two scenes where people are shown vomiting
Violence:
Very strong and strong violence includes fist fights and gunfights (some more bloody than others), cringe-worthy scene where a man’s hand is being broken, woman is punched in the face, man throws knife into a man’s chest, girl kicks a man in the crotch, man is shot through a high window splattering to the ground, and a man is stabbed in the leg with a shard of sharp glass
Sex:
Strong amount of sexual content, mostly involving sexual comments or crude jokes, a couple has a baby out of wedlock, a father sends his son gifts for Christmas such as condoms and dirty magazines, woman in a crack house offers to give oral sex for $10, insinuated fornication, prostitutes offer a “two for one special,” man asks about getting HD pornography, man flirts with two other men
Nudity:
Upper female nudity as a woman opens a door wearing only an open jacket and upper male nudity in one scene set in a crack house
Alcohol Use:
Characters have alcoholic drinks constantly throughout the movie, including multiple scenes that take place in a bar or club, as well as restaurants where everyone is drinking, and one example of extreme drunkenness as a young man drinks too much and starts a bar fight, then later vomiting
Smoking and/or Drug Use and Abuse:
Multiple scenes where characters are smoking cigars or cigarettes, man used to be a heroin user and supposedly dies from overdose, underground drug ring throughout where people are smuggling cocaine and heroin, man is shown “testing” the product, man is shown smoking heroin in crack house; and,
Miscellaneous Immorality:
Strong examples of a dysfunctional family, woman leaves man with their child because of his line of work, man is absent from his son’s life for 25 years, many racial elements as the media portrays a drug bust in a mosque as racially motivated, man gives his son a hard time about not actually being black because he’s smart and responsible, man insults a Muslim man in a mosque about his religion, man has a racist filing system and compares it to the way the FBI files their records, revenge is a major theme as the storyline is based around getting back at the people who killed someone, the father and grandfather for the main character are portrayed as very negative role models whose morals and way of life are very immoral.

SHAFT (2019) takes a look at the third generation of John Shaft Senior. His grandson, who goes by JJ, has lived for 25 years without seeing his father, John Shaft, Junior, since his mother left because of the dangerous life they were living. John Shaft works as a private detective in the underground crime world in Harlem. JJ has been raised by his mother to live a very different life from that of his father. He has attended MIT and now works at the FBI as a data analyst.

One morning JJ is woken up by a phone call from his mom telling him that his best friend, Karim, has been found dead of an apparent overdose. Although Karim used to use drugs, he had been clean for years. So, JJ feels there’s something off about the story that the police have reported. At his work computer, he begins to look into the case, trying to find any information proving his friend was clean and sober. He finds there’s no possible way for a person to administer to themselves the amount of heroin that was in Karim’s system, and he sets out to investigate further. He finds a drug house deep in Harlem, but since he’s completely unfamiliar with this dark world, he quickly realizes he’s in over his head when he gets knocked out by a henchman.

JJ turns to the only person he knows can walk the streets of New York and incite fear into the drug lords and criminals, and that’s his father, John Shaft. The only contact that he’s had with him in the past 25 years were the completely inappropriate Christmas presents his father sent every year. He finds his dad in the middle of a sex romp and drinking whiskey at 10 in the morning. John tries to guilt his son into drinking with him, but JJ walks a straight line. He tells him he needs his help with a case, and reminds him of his absence from his life. John agrees to help him when he hears the whole situation and immediately snaps into father mode when he sees the scar on JJ’s head from being hit.

John immediately goes straight to the crack house, shoots a few henchmen in their legs, and squeezes information out of the ringleader. The information leads them later to a mosque to question the girl Karim was dating, but they’re bombarded by suspicious people telling them to leave when they find out that JJ is FBI. JJ is able to hack into the bank accounts of the mosque and finds a strangely large donation from a local supermarket. When they approach the supermarket owner, they’re met with force and have to figure out a way to get their answers. JJ plants a microscopic camera on the desk, and they are able to watch the activity from his phone.

Later that night, while John and JJ are at separate restaurants, they’re both attacked by henchmen but are able to fight their way out. By this time, JJ’s mother has shown up and implores John to not involve JJ any longer in his underground detective work. John tells JJ he thinks it’s time to turn over the evidence to the FBI, but when he does, the media calls the FBI racist and JJ is fired. Now that he’s a free agent, JJ puts all his efforts into finding out what really happened to his friend, and his investigation leads him down a path that goes way deeper than this one death.

SHAFT is the third make of this movie, the first being in 1971 starring Richard Roundtree, and the next starring Samuel L. Jackson as his son. This time around, JJ is the new generation of the Shafts, and it’s time for him to enter the family business. While they would like to portray John Shaft as the coolest detective to walk the streets of New York, the action in this movie is rather unexciting, which is the partial basis of the plot. The storyline ends up being empty, stretching to bring things back and also trying to create a deeper meaning but failing. The dialogue can be rather cheesy at times, with only about half of the jokes hitting the right notes.

This movie follows a very negative worldview with man being the judge and the one to deliver justice without looking to God for guidance. Although JJ is searching for the truth about his friend, he’s doing it in a way that rebels against authority and the law. The number of obscenities and profanities is astronomical, clocking in at about 300 or more. Many of the jokes are crude and inappropriate, often about genitals or some type of sex. SHAFT also has an unnecessary amount of violence and gunfights, as well as drug references throughout. This new SHAFT (2019) movie is one for media-wise moviegoers to avoid.