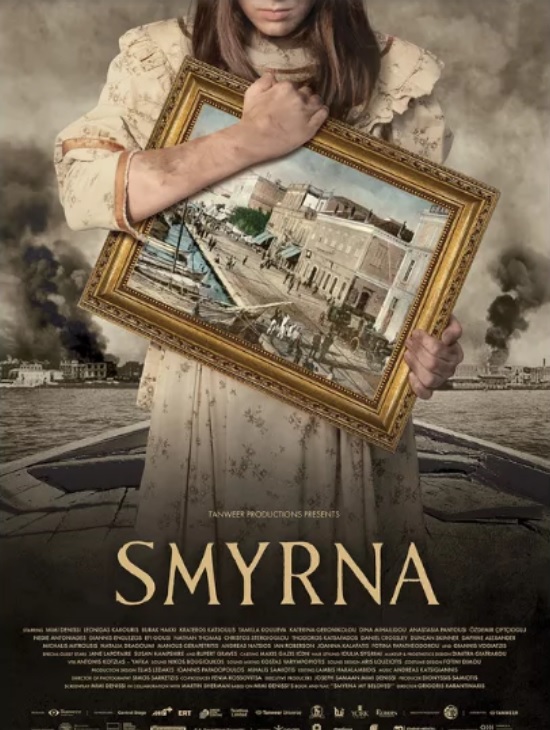 SMYRNA a Greek movie based on a true story. It tells the tragic story of the city’s fall as a result of the Turkish occupation in 1922, four years after World War I ended. Told through the eyes of a wealthy Greek family, the Baltatzis, the movie explores the events before, during and after Smyrna’s fall to the Turkish army. During the chaos of World War I, the Baltatzis cheer on the Greek military after they helped the Allies defeat the Turks and Germany. However, their victory is short-lived, as politics, family ties and cultural tensions result in atrocities and tragedy, which continue to affect the Greek ancestors of Smyrna today.

SMYRNA is a well-crafted piece of art. It highlights the tension between Greeks and Turks, and the unjust Turkish occupation of Smyrna, which eventually led to the city’s destruction. Filled with jeopardy, SMYRNA is a timely historical drama that points to today’s refugee crisis and looks at the possibility of peace for a future generation. However, SMYRNA suffers from a disappointing lead performance, some violence and a bedroom scene. So, MOVIEGUIDE® advises caution for children.

(BB, L, VV, S, N, A, D, M):
Dominant Worldview and Other Worldview Content/Elements:
Strong moral worldview, showing how corruption, injustice and war has lasting consequences
Foul Language:
Mild foul language
Violence:
The movie covers violent topics like World War I, the persecution of the Greek population in Smyrna in 1922, and other political perils including massacres, genocides, and war, the violence is not overly graphic but honestly the depicts the tribulations in Smyrna where people are shot, a city is shelled, and people flee their homeland
Sex:
Implied fornication between a family member and one of their maids (no nudity is shown, but they are seen in their underwear in bed)
Nudity:
Upper male nudity, plus a woman is seen in her underwear
Alcohol Use:
Smyrna is a lively city where everyone drinks
Smoking and/or Drug Use and Abuse:
Characters smoke throughout, but no drug references; and,
Miscellaneous Immorality:
Corruption and injustice.

SMYRNA is an award-winning Greek movie about the 1922 Turkish occupation of the city of Smyrna, a port city known for its lively nightlife, trading between nations and proud Greek ancestry. It’s getting a one-day theatrical release in the United States.

The movie opens with a current look at the refugee crisis in Lesvos, a Greek city on the coast of the Northern Aegean Sea, in 2015. A woman named Filio Williams gives her granddaughter a recipe book, which in reality, is the journal of Filio Baltatzi about her life in Smyrna during World War I and after.

As the journal is read aloud, the movie flashes back to 1916, two years before the war ends. Smyrna is a lively city, with a bustling nightlife and a melting pot of nationalities for its promising trade routes to Italy, Greece and the Middle East. The Baltatzis are a wealthy Greek family who live alongside many of the Turks living in Smyrna, despite the Turkish Army siding with Germany in the war. Many of Filio Baltatzi’s friends and family question why they would treat their Turkish servants so well, especially after the Armenian genocide which happened in 1915. However, the Baltatzis consider their Turkish servants as family.

Soon, Greece decides to join the Allies and help overthrow Germany and the Turkish army. The Greek military occupies Smyrna, with resistance from the Turkish Army. In 1922, four years after the war, Smyrna is overtaken by the Turks, and the Turkish occupation of Smyrna begins.

Meanwhile, Filio Baltatzi and her family deal with family and cultural pressures from their enemies, servants, friends, and families. Under the persecution of the Turks, the Greek population in Smyrna is forced to flee their homeland, starting a refugee crisis that continues to this day.

The cinematography and editing in SMYRNA are superb. Sadly, the acting falters with a disappointing lead performance. While there are some strong performances, the portrayal of Filio is central to the movie’s plot and emotional weight, but it’s the weakest performance among the cast. Despite this shortcoming, SMYRNA manages to be a well-crafted period drama.

SMYRNA highlights the cultural tension between Greeks and Turks, and the unjust Turkish occupation of Smyrna, which eventually leads to its destruction. SMYRNA is a timely historical drama that points to today’s refugee crisis. Also, by showing the consequences of war and persecution, it champions the need for peace for a future generation and the restoration of a people’s homeland. MOVIEGUIDE® advises caution for older children because of some violence, a bedroom scene and war-time peril.