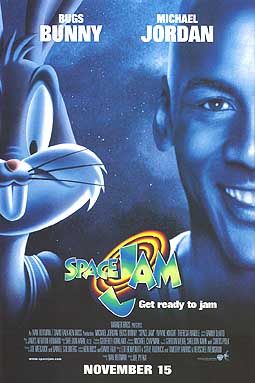 SPACE JAM is a mix of live action and animation featuring the Looney Tune characters and basketball great Michael Jordan. When Bugs Bunny challenges a group of little aliens who have come to make slaves of the toons to a basketball game, only Michael Jordan can help the toons get out of a jam. Fast-paced, well-executed and moral, it has prayers and a church scene, but is marred by an all-too-believable seance scene.

Director Joe Pytka takes the wacky relationship between humans and “toons” to Moron Mountain, an outer space amusement park run by an overbearing boss. The boss finds that attendance is dropping off so he sends his little aliens to earth to capture the Looney Tune characters. Needless to say, Bugs Bunny is not going to be hauled away into space so easily. He challenges the little aliens to a basketball game, only to find out that they have the power to steal the talent and size of the top players in the NBA. The tunes are distressed until they draft Michael Jordan to play against this MonStar squad from outer space. With the survival of toon-town at stake, this ultimate game is waged by Michael Jordan and his friends.

SPACE JAM is a fast-paced, fun movie. Sometimes the pacing is so fast, that you don’t have time to enjoy the humor. It is punctuated by prayers and a church scene, and marred by an all-too-believable seance scene. Even so, this is a good-natured movie which stays away from the scatological humor that one would expect from this looney crowd. Given the preferences of the MTV generation and the recognition factor of both Jordan and the Looney Tune characters, SPACE JAM should do quite well at the box office.