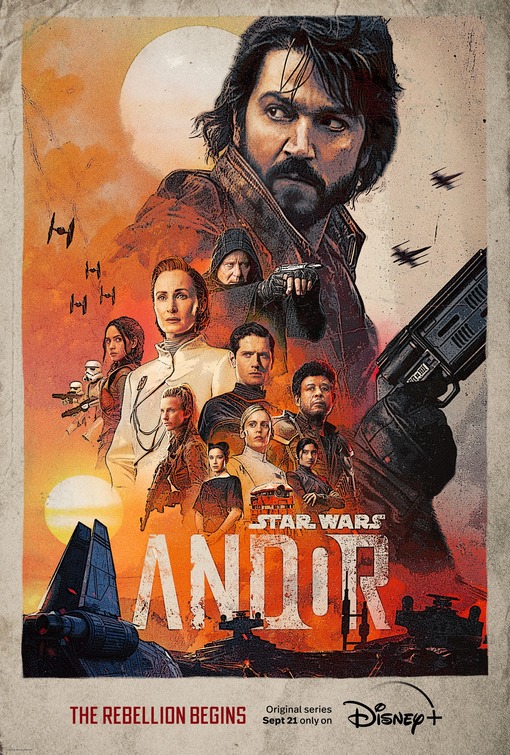 The Season One finale of STAR WARS: ANDOR on Disney Plus begins with Cassian Andor returning to Ferrix to secretly attend his adopted mother’s funeral. As Andor watches, the people gather in the town square to hear a message Andor’s mother recorded before she died. Her message to the people: Wake up and fight the empire! The people rebel, but Imperial troops attack them. Andor must rescue his tortured friend Bix, who’s held captive by the secret police. Meanwhile, Bix and Andor’s contact to the Rebel Alliance has come to kill him if the Empire takes Andor alive.

The Season One finale of ANDOR is an exciting finish to the season. It champions freedom against tyrannical government. Andor’s willing to do whatever it takes to save the people he loves. As a prequel to the original STAR WARS, ANDOR is a fascinating look at the start of the rebellion and how good conquers evil. ANDOR boasts some of the best writing and acting of any Disney Plus series to date. MOVIEGUIDE® advises caution for older children for the violence in Episode 12.

(BBB, ACACAC, PP, VV, M):
Dominant Worldview and Other Worldview Content/Elements:
Very strong moral worldview of rebellion and a fight for freedom against tyrannical government, in the form of the Galactic Empire of STAR WARS, with pro-liberty sentiments expressed, the use of personal weapons against tyranny, and woman gives a speech about standing on the shoulders of those who have come before, says tyranny thrives and spreads in darkness and encourages people to fight for their freedom
Foul Language:
No foul language in Episode 12
Violence:
The beginning of the episode sees a young man building a bomb which is later used against the Empire, citizens of Ferrix who are unarmed but attacking the empire are shot (not bloody but intense), hero saves a woman who’s been tortured by the Empire, rebel woman knifes an Empire thug to death under his cloak, rebel tosses a storm trooper off a building, a female villain struggles against a mob of rebels, storm troopers shoot at rebellious citizens, explosions, and miscellaneous skirmishes, fighting and shooting
Sex:
No sex
Nudity:
No nudity
Alcohol Use:
No alcohol use
Smoking and/or Drug Use and Abuse:
No smoking or drugs; and,
Miscellaneous Immorality:
A rebel leader has traveled to the planet in the episode to kill the titular hero if he’s captured alive, because the hero knows too much.

In the Season One finale to STAR WARS: ANDOR on Disney+, Cassian Andor returns to his home planet, which has become a tinderbox, ready to explode into the first major rebellion against the evil Galactic Empire. The Season One finale of STAR WARS: ANDOR tells an exciting, uplifting story of rebellion against tyranny, but it has lots of action violence that warrants caution for older children.

The episode opens as the people of Ferrix, the planet where Andor grew up, prepare for a funeral procession for Andor’s mother. Andor is a wanted criminal by the Empire. However, he returns to Ferrix not only to see his mother’s funeral secretly, but also to check in on friends that are still on the planet and at risk from the Empire.

The Empire is catching on to Andor’s crimes and sends a substantial force to watch over the people of Ferrix. As the funeral commences, a network of espionage leads to several discoveries for both the Empire and the budding, underground Rebel Alliance.

Andor, with the help of some old friends, sneaks around Ferrix to watch his mother’s final address to the people of Ferrix via a hologram she recorded before her death. Her message to the people: Wake up and fight the Empire! The people in the town square start to confront the Imperial forces arrayed against them in the street.

Chaos breaks loose and a bomb goes off in a crowd of stormtroopers. As the people of Ferrix rally behind Andor’s mother’s words, the Imperial forces are frightened and start killing unarmed civilians.

Meanwhile, Andor is on a mission to rescue his friends from the planet and gets them on a ship. During the chaos, he sneaks into the hotel where the secret police are holding his friend, Bix, who’s been tortured to lure Andor back to Ferrix. However, Bix and Andor’s contact to the Rebel Alliance, Luthen, has come to kill Andor if the Empire takes him alive.

The Season One finale to ANDOR tells an exciting, inspiring story of freedom against tyranny. In the episode, Andor, the program’s titular hero, is willing to do whatever it takes to save the people he loves. Also, in one scene, Andor recalls a hopeful speech from a friend, who told him that tyranny thrives in darkness and saying, “Freedom is a pure idea. It occurs spontaneously and without instruction. The day will come when all these skirmishes and battles, these moments of defiance, will have flooded the banks of the Empire’s authority, and then there will be one too many.” As a prequel to the original STAR WARS movie, ANDOR is a fascinating look at the start of the Rebel Alliance and its story of how good conquers evil. Season One, Episode 12 of ANDOR has no foul language or crude content, but MOVIEGUIDE® advises caution for older children because of some violence and death.