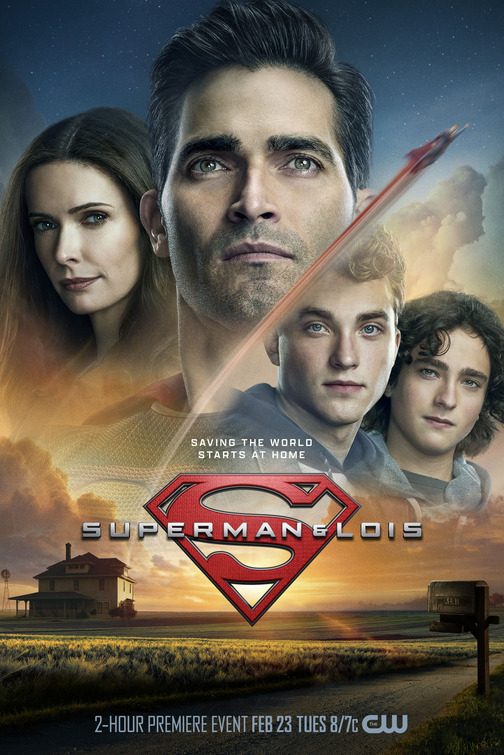 Episode One of SUPERMAN AND LOIS is a gripping science fiction drama that follows Clark Kent and Lois Lane’s relationship after they wed and welcomes twin boys. As Superman, Clark often misses important life events for his sons. When his mother dies, Lois confronts Clark and demands he put family first. The family moves from Metropolis to Smallville so they can enjoy the slower pace. The couple discovers one of their sons has inherited Clark’s Kryptonian abilities. Clark realizes he must step up to the plate to mentor both his sons before they leave for college.

The first episode of SUPERMAN AND LOIS tells a gripping, engaging story. It also has a strong moral, redemptive worldview told through a compelling family narrative. The episode extols family, marriage, humility, truth, forgiveness, and knowing the difference between good and evil. The Kents listen to prayer and Scripture reading. Also, Clark tells his son how important church was to his father. There is, however, some action violence, as well as some light foul language and brief scenes of drinking. So, MOVIEGUIDE® advises caution for younger children.

(CC, BBB, L, VV, AA, M):
Dominant Worldview and Other Worldview Content/Elements:
Very strong Christian redemptive worldview with strong overt Christian references such as prayer, scripture reading, depictions of crosses, discussion of church, and a scene at a church, with biblical, moral, redemptive values extolled such as traditional marriage, a strong father figure, teamwork, humility, forgiveness
Foul Language:
Light foul language includes at least one light profanity, one use of the “a” word, and five uses of the “h” word
Violence:
Moderate action violence including fist fights, punching, kicking, someone is stabbed but there is no blood, and use of heat vision laser eyes
Sex:
No sex
Nudity:
No nudity
Alcohol Use:
One brief scene where adults drink beer, one party scene where teenagers drink beer, one teenager cautions another against drinking and drugs
Smoking and/or Drug Use and Abuse:
No smoking or illicit drugs, but one teenage boy takes anti-psychotic medicine for a major anxiety disorder, and one girl admits to taking drugs before; and,
Miscellaneous Immorality:
Father doesn’t tell his sons the truth about his identity, teenager discusses a suicide attempt, and children yell at their parents.

The CW’s SUPERMAN AND LOIS picks up where most Superman stories leave off – with Clark Kent marrying Lois Lane and the couple driving off into the sunset. In this freshman series with Tyler Hoechlin’s Superman from the Arrowverse, Clark and Lois must learn to balance his obligations to save the world with his role as the head of the family.

The pilot episode opens with Clark recapping the typical Superman saga – how an alien baby crashed to earth and was raised by the kind-hearted Jonathan and Martha Kent. The Kents raised Clark to be a kind and thoughtful human who adheres to a strong moral code, which he keeps even after he develops super powers.

After Jonathan dies from a heart attack, Clark moves to Metropolis to explore his powers. He meets Lois Lane while working at the Daily Planet. The two fall in love, and Clark reveals his true identity. The couple marry and soon find out they’re expecting twin boys, Jonathan and Jordan. The boys are complete opposite, with Jonathan a happy-go-lucky child to whom everything comes easy while Jordan wrestles with anxiety and a certain darkness.

When Clark’s mother, Martha, dies, the Kent family returns to Smallville for her funeral where the family reunites with the Cushing family. Lana Cushing is Clark’s old flame but is now married to Kyle. Their oldest daughter, Sarah, is the first to befriend Jonathan and Jordan. The twins and Sarah go to the barn on the Kent farm to reset the router after the funeral. The router is in the rafters, and Jordan slips when trying to reset it. When steel pipes begin to tumble after Jordan, Jonathan jumps over him to save his brother. The two are miraculously unharmed, prompting questions from the twins and Sarah.

Meanwhile, Lois and Clark must decide what to do with the Kent farm. The Cushings tell the Kents that many people have left Smallville, but a billionaire wants to come in and invest in the local economy. Lois is familiar with the billionaire and suspects he’s up to something sinister.

The boys return to the scene of the accident to determine how they survived. They discover the alien pod that brought Clark to earth and confront their father about his deepest secret. The twins are livid that their parents lied to them. They choose to blow off steam by attending a party. At the party, a fight breaks out when Jordan tries to kiss Sarah. As Jordan’s anger rises, he shoots laser beams out of his eyes, revealing that he’s inherited his father’s Kryptonian powers. The family quickly realizes that it was Jordan’s strength that saved the boys when the pipes fell.

With Jordan’s new abilities and the family farm up for sale, the Kents decide it’s time to put family first and Superman second. Clark determines to be a better, more present father, setting the series up for a strong familial arc that teaches the strongest family is the one that works together.

At the same time, there is a subsidiary storyline about an alien villain who wants to destroy Superman and who knows all about Superman. In the midst of one of their battles, there is a death and resurrection scene, where the resurrection is a response to Lois calling Superman home to help the boys.

The pilot episode of SUPERMAN AND LOIS is gripping and engaging. It maintains the production quality of the Arrowverse on The CW without the network’s darker, “woke” elements. The writers create a compelling narrative that focuses on the Kent family beyond traditional storylines as they explore the succession of power. Furthermore, the show extols traditional family values, promoting the importance of a present father who invests in his children’s lives.

SUPERMAN AND LOIS has a strong moral, redemptive worldview with strong, overt Christian elements. In Episode 101, there’s prayer, Scripture reading, depictions of crosses at a church, as well as Clark telling Jordan how his father, Jonathan Senior, was on his way to church when Clark first crashed to Earth. Clark adheres to a strict moral code and wants to train his sons to do the same. The show features a strong marriage between a man and a woman as they work together to raise their family to have biblical values. The first episode of SUPERMAN AND LOIS has some light foul language, as well as strong action violence and brief scenes of drinking. So, MOVIEGUIDE® advises caution for younger children.