TERROR ON THE PRAIRIE 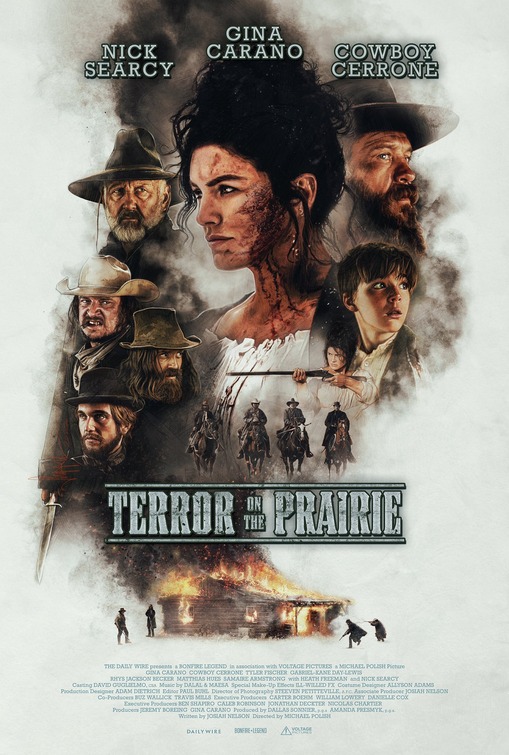 TERROR ON THE PRAIRIE is a new western made by the folks at The Daily Wire for their conservative website. It’s set after the American Civil War. Hattie McAllister and her sharpshooter husband, Jeb, struggle to feed their two children on their ranch in Montana. Meanwhile, a group of Confederate outlaws seek revenge on Jeb, a soldier who defected to the Union. The bandits stage a shootout at the McAllister household while Jeb’s in town getting supplies after a brutal winter. With only her weapons and her wits, Hattie protects her Montana family.

TERROR ON THE PRAIRIE is a provocative and well-shot, yet serviceable, western thriller. It showcases strong family values and the brutality of frontier gunfire. The McAllister family believes in God, and the movie contains many positive references to God, plus references to the New Testament. However, the pacing is too slow, and most of the acting leaves something to be desired. TERROR ON THE PRAIRIE also has some very strong bloody violence, plus some obscenities. There’s also a scene involving a depicted attempted rape. So, MOVIEGUIDE® advises extreme caution.

(CCC, BBB, PPP, CapCapCap, LL, VVV, SS, AA, D, MM):
Dominant Worldview and Other Worldview Content/Elements:
Very strong Christian, moral worldview with very strong Pro-American, capitalist values in a western about a Christian family defending their home from Confederate bandits out for revenge, the family believes in God and the value of a strong family unit. There are abundant references to God, and the family and the Confederate bandits debate various passages in the New Testament
Foul Language:
About 20 obscenities, but no “f” words
Violence:
Many instances of gun wounds, intense gun shootouts and realistic blood plus an innocent man has his head “scalped” before the title card, one character dies by a brutal cut to the neck, bandit gets stabbed in the chest, characters fire shotguns and pistols, man almost gets hanged to death, woman and her family endure physical torture, man is shot in the heart
Sex:
Depicted attempted rape when a bandit tries and almost succeeds in committing sexual assault, the bandit hits woman with his fists, but she overcomes him and stabs him to death, Woman gets blood on her dress when she acts as a midwife to a pregnant Native American woman, the pregnant woman suffers a miscarriage, and a saloon prostitute invites one drunk man to her hotel room, but the man quickly abandons her for his family duty
Nudity:
No nudity
Alcohol Use:
Man briefly walks drunk around a Montana town but goes sober the next day
Smoking and/or Drug Use and Abuse:
Montana townspeople briefly smoke pipes, but there are no drug references; and,
Miscellaneous Immorality:
Dysfunctional and morally corrupt portrayal of the Confederate antagonists, bandits practice revenge, lying and emotional blackmail but one bandit expresses hesitance to attack the McAllisters, the bandits berate Hattie’s authority and skills because she is a woman, the bandits shoot a McAllister cow in the leg and skin it for meat, the bandits promise to “not harm women or children,” but break their own promise or moral code.

TERROR ON THE PRAIRIE is a western thriller on the Daily Wire website about a woman in Montana shortly after the Civil War who must defend her children from a group of Confederate outlaws seeking revenge on her husband, a Southern fighter who defected to the Union. TERROR ON THE PRAIRIE has great production values, with a strong Christian, moral worldview with American, conservative, pro-family values, but the pacing is sometimes too slow, the acting is inconsistent, and the movie has some bloody violence, about 20 obscenities and a scene of attempted rape.

The movie’s story follows Hattie McAllister and her family surviving on their lonely Montana ranch. Hattie’s husband, Jeb, is a stern yet caring father for their son and baby daughter.

After a harsh winter, Jeb heads into town to restock their dwindling supplies. Meanwhile, a band of cowboys visits the McAllister farm. The cowboys ask for a brief stay for their extended travel. Hattie initially admits their benign presence. However, she quickly discovers a man’s scalp lying on a cowboy’s unattended horse.

Hattie heads back into her home, grabs her shotgun and orders the cowboys to leave. The instigators reveal they are former Confederate soldiers and are seeking revenge on her husband. Hattie and her son expel the invaders, but the Confederate men surround the farm. The gang leader reveals his true motivation. Jeb McAllister took his daughter’s life during the Civil War and is seeking vengeance on the McAllister family.

The story then evolves into a series of intellectual and physical fights. Jeb reveals to his wife that he took a Confederate officer’s daughter by accident and is deeply haunted by this guilt. Hattie has terrible aim but stands tall to defend her family. Both factions inflict heavy emotional and physical damage. They also debate the idea of vengeance contrasted with God’s teaching in the Bible.

In terms of production values, TERROR ON THE PRAIRIE is well shot. The full use of Montana’s natural landscapes is a visual treat. The costume and set design feel authentic to the post-Civil War era. There are only four locations, but the filmmakers make creative use of their limited resources. The shootout scenes are intense, and the camera framing is excellent. The same cannot be said, however, with the writing.

Though the movie has a positive worldview, it has severe shortcomings. First, the dialogue is stilted and most of the acting is unmemorable. The best performance is by Gina Carano as Hattie. Carano sells the desperation and passion in protecting her impoverished family. Her expert acting is absent for almost every other character except Nick Searcy, who’s very good as the leader of the outlaws. Secondly, the movie is light on the “philosophical” side. The characters cite the Bible as motivation, but the debate rings hollow to this action-first film. The “who has the right to kill” question is barely explored. Lastly, the film has severe pacing issues. The simple premise is stretched out beyond reason, which results in too many boring scenes. The lack of music adds to the movie’s slow pacing.

The most commendable aspect of TERROR ON THE PRAIRIE is its social and cultural nature. The Daily Wire, the movie’s distributor, has promised viewers that its movies will avoid “woke/progressive” leanings. Thus, TERROR ON THE PRAIRE ditches progressive ideals for nuanced portrayals of masculinity, traditional marriage, and trusting the intelligence of the audience. Most of all, the film takes massive creative risks such as realistic violence and brutal subject matter. It has a “conservative” leaning, but it doesn’t “preach” to its audience. In that sense, the film is more concerned with “being good art” than “forcing a message.” However, it does have a very strong Christian, moral worldview with very strong Pro-American, capitalist values. For example, the western family defends its home from bandits who are out for revenge. They believe in God and the value of a strong family unit. TERROR ON THE PRAIRIE also has abundant references to God. In addition, the family and the Confederate bandits debate various passages in the New Testament in some thought-provoking, though slowly paced, scenes.

Finally, TERROR ON THE PRAIRIE has some very strong bloody violence and some obscenities. There’s also a scene involving a depicted attempted rape. So, MOVIEGUIDE® advises extreme caution.