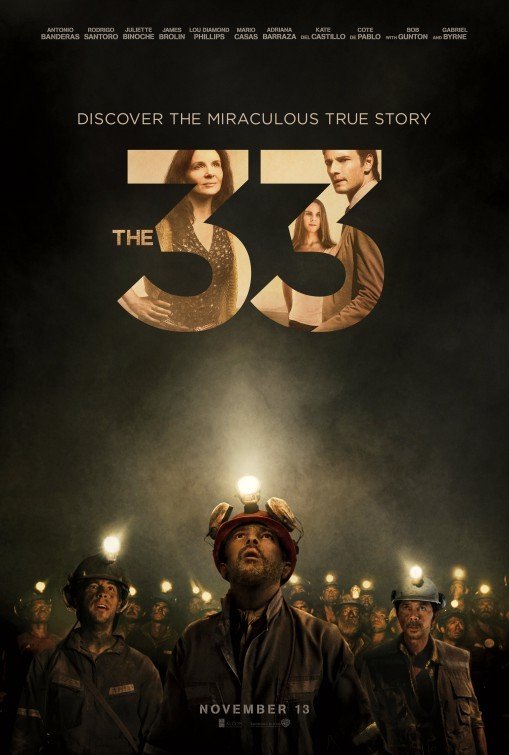 THE 33 is an extremely powerful movie based on the true story of 33 miners trapped in an old mine in Northern Chile in 2010. The movie opens with miners celebrating a party for an old-timer who’s retiring. The next morning, the miners take a rickety bus to a 2,300-foot deep mine that’s been dug for many years. When they arrive near the bottom, the mountain starts to collapse, and 33 miners are trapped. The rest of the movie details the plans aboveground to free the miners, and the struggle for survival underground with limited food and water.

THE 33 is a true story with some difficult elements, including a drunken miner and a man with a wife and mistress. The worst is the lack of hope. However, a miner and a minister help everyone pray in the name of Jesus to sustain their hope. THE 33 has some Catholic symbols and other elements, but it focuses on God and the miracles He brings. The dialogue is terrific, the jeopardy intense. THE 33 is one of the best survival movies ever made.

(CCC, BB, LL, VV, S, N, A, MM) Extremely strong, evangelistic Christian worldview with great prayers and demonstrations of faith, including the miracle of being saved under impossible circumstances and visions of the Eucharist when men are starving, and family is emphasized, a very few Roman Catholic icons and statues; at least 11 obscenities and two profanities; a mountain starts to collapse on miners, miners are hurt and wounded, a fight breaks out between miners, threats of starvation and violence, vague and semi-serious threats of cannibalism in one or two scenes, a woman slaps a government official hard, threats of riots as families wait angrily outside fence; kissing and some sexual references, man commends his wife’s figure, a couple light sexual discussions or references, and a man has a wife at home and a mistress across the street from his home, and other men joke about it; upper male nudity; light alcohol at a party; no smoking or drugs; and, dissension among trapped miners, theft, lying, mob rule, careless and callous mine operator, and careless and callous government officials, but faith triumphs.

THE 33 is an extremely powerful movie based on the true story of the 33 miners trapped in an old San José mine in the middle of the formidable Atacama Desert in northern Chile in 2010. THE 33 is extremely well plotted, with great jeopardy and overt evangelistic salvation stories set in a light Roman Catholic context.

The movie opens with the miners celebrating a party for an old miner about to retire. Next, it cuts to a street vending woman gives an empanada to a drunk on a bench, who is her brother.

When the next day starts, the miners take a rickety bus to the desert to a mine that’s been dug for many years, and is now 2,300 feet deep. The foreman informs the manager the mine is shifting and unsafe, but the manager will have nothing of this and sends the men down anyway.

When they arrive near the bottom, the mountain starts to collapse, and 33 miners are trapped in the refuge area 2,300 feet below the surface. They’re faced with only three days of food, practically no water and a piece of rock the weight of two Empire State buildings sealing their exit and pressing down on their location.

The drunk who was given the empanada breaks into the nearly empty food chest and starts devouring crackers. Mario (Antonio Banderas) pushes him away and informs the miners it’s going to take days for them to be rescued, so they need to ration the food and water.

Aboveground, the mine manager tries to seal off the mine, believing the men are as good as dead. However, two men get out before the gates are shut and tell the world. The Chilean president tries to ignore the situation, but a young government official, Rodrigo, says the government must do something because the world’s watching. He goes to the mine, and everyone is pessimistic about the chances and the cost of rescuing the men.

Meanwhile, the families of the miners gather at the mine company’s gates and demand a rescue. When Maria slaps Rodrigo for giving her the bad news he was told, he goes back to the mine official and says they need to try everything. They bring in Andre, a mine engineer who also thinks the odds are against them.

Buried deep in the mine refuge, the safety foreman, Luis, played by Lou Diamond Phillips, believes all the miners, including him, will die. The miners tease the one Bolivian miner, who’s threatened because of their dislike for him. The other miners briefly make jokes about cannibalizing him. However, Mario keeps the miners alive by rationing the food day after day.

One of the miners is an evangelical minister. He prays in the name of Jesus, leads the alcoholic miner to Jesus, and, along with Mario, gives the miners hope. The day their food runs out, they have visions of the sacrament of communion.

Will the 33 miners be able to get out? Will their prayers be heard? Will a miracle happen?

THE 33 is a true story with some difficult elements, including the drunken miner and a man with a wife and mistress. The worst is the lack of hope.

However, Mario and the minister make a tremendous difference by helping everyone pray in the name of Jesus and to sustain their hope (reportedly, the real-life miners prayed and read the Bible every day). Aboveground, Rodrigo and Maria refuse to give up, even when everyone else does.

This is one of the most surprising, exciting movies made. It is not for children. It has a few Catholic icons, statues and other elements, but the filmmakers are to be commended for the movie’s evangelistic focus on God and the miracle He does in an impossible situation. Also, one character decides to ask for forgiveness from God and also forgives others.

Although there are many characters, each one is well crafted and distinctly memorable. The dialogue is terrific. The jeopardy is intense. THE 33 is more than just a faith-based movie. It’s one of the best survival movies ever made.