"Too Many Twists and Too Many Dead Bodies" 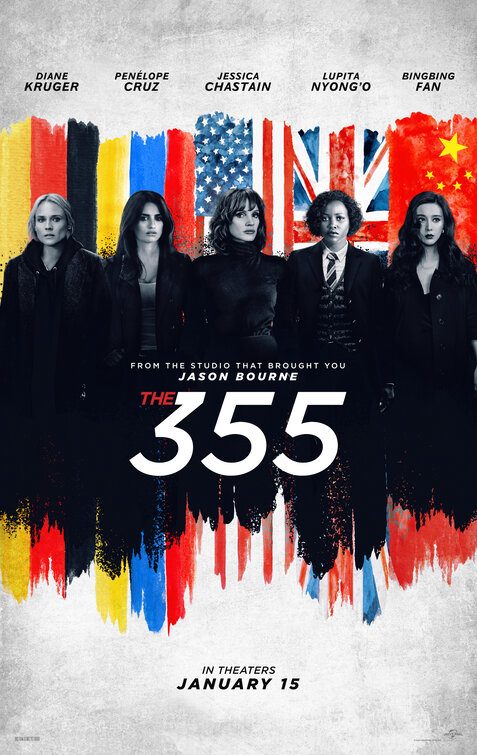 THE 355 is an intense spy thriller. Three female agents from America, Britain and Germany, Mace, “Deej” and Marie, team up with a Colombian psychologist to stop a powerful high-tech cyber weapon from getting sold to the highest bidder. The women manage to bring some justice to one villain, but they must go under cover to escape prison. Eventually, after many twists and betrayals, their journey leads to an underground auction in Shanghai using a public auction for cover. Can they retrieve the weapon or destroy it? Will they survive?

THE 355 is an intense, thrilling, entertaining spy movie with lots of action, twists, betrayals, and a serious theme about the loneliness of being a spy. It supports protecting the world from evil and also supports family. However, there are almost too many twists, a few of which don’t seem to make sense. THE 355 also has some obscenities and lots of intense action violence with a high body count. Finally, a female Chinese spy helps the heroines, but the movie doesn’t mention her communist government. So, MOVIEGUIDE® advises extreme caution overall.

(BB, FR, Fe, CoCo, LL, VVV, S, A, M):
Dominant Worldview and Other Worldview Content/Elements:
Strong moral worldview supports protecting the world from evil and supports family, with two or three references to Islam in scenes set in the Muslim country of Morocco, and a light feminist subtext seems to look askance at the male-dominated world of spies in America and Western Europe, plus a female Chinese spy helps the heroines in the third act, which seems to be a sop to the brutal Chinese Communist Party that runs China, to sell this movie there
Foul Language:
13 obscenities (including one “f” word), one GD profanity and one OMG profanity
Violence:
Lots of intense action violence with a high body count, but not extremely bloody, includes intense gunfights, lots of tough martial arts and boxing violence between men and women in the fight scenes, explosions, hanging for dear life on a hotel balcony high above the ground, bad guys smash through windows to attack the good guys and vice versa, bad guys murder two innocent victims in cold blood to force the good guys to give up a powerful cyber weapon, many people shot dead or wounded, people deliberately knocked out, etc.
Sex:
Implied fornication, and a woman is living with her boyfriend
Nudity:
No nudity, but obscured image of woman’s bra as she passionately kisses a man
Alcohol Use:
Some alcohol use
Smoking and/or Drug Use and Abuse:
No smoking or drugs; and,
Miscellaneous Immorality:
Stealing, threats of terrorism, two women pretend to be together to avoid a man at a party.

THE 355 is an intense spy thriller about three female agents from America, Britain and Germany teaming up with a Colombian psychologist to stop a powerful high-tech cyber weapon from getting sold to the highest bidder. THE 355 is an intense, thrilling spy movie about saving the world, with twists, betrayals and a serious theme about the loneliness of being a spy, but it has almost too many twists and contains some obscenities, as well as intense action violence with a high body count.

The movie opens with the Colombian army breaking up the sale of the cyber weapon, which can take over any computer system, including systems on commercial flights. A rich financier is trying to get his hands on the computer driver carrying the high-tech weapon. The bad guy and his men are interrupted from stealing the drive. In the melee, one of the soldiers, Luis, takes the drive and tries to sell it to the CIA for a mere $3 million.

The CIA sends two of its top co-ed agent teams, Nick and Mace (short for Mason), to Paris to complete the deal, but a female German spy, Marie, interrupts the handoff. Marie also makes off with the $3 million while Nick and Mace get separated.

Back in D.C., their boss tells Mace that, after Nick went after Luis, and she went after Marie, Nick ended up dead. Mace is devastated because she and Nick had a romantic relationship. Mace is being investigated for losing the $3 million, but her boss encourages her to go after Luis on her own. So, recruits her friend in MI6 in London, Khadijah, a cutting-edge computer specialist to help her locate Luis, who still happens to be in Paris.

Meanwhile, the Colombian government has sent Luis’ army psychologist, Graciela, to convince him to return home with some undercover agents. He agrees, but, just as Mace and “Deej” show up to monitor them, the German female spy, Marie, shows up too, and one of the Colombian agents turns on Luis and kills him, escaping with the drive containing the cyber weapon. Using a motorboat, the Colombian agent evades Marie and Mace. Then, Marie kidnaps Graciela from the French police.

Deej helps Mace track down Marie and Graciela to a German safe house. After a tense moment, the three female spies agree to work together to retrieve the drive. Graciela tells them that, before he died from his wounds, Luis, transferred a tracking app of the drive to her phone. The tracking app, however, requires her signature. The other women convince Graciela to help them track the drive, even though she’s anxious to return to her family.

The four women forge a tenuous loyalty to stop the drive from being sold to the highest bidder. Eventually, their journey leads them to an underground auction in Shanghai using a public auction for cover.

THE 355’s title refers to the secret number of a mysterious, unknown female spy working for George Washington during the War of Independence against Great Britain. The movie is an intense, thrilling spy movie with twists, betrayals and a serious theme about the loneliness of being a spy. This theme comes with an overt support for family, including support for the idea that spies should think about starting a family.

[SPOILERS FOLLOW] Although the four heroines save the world, one of the bad guys gets away and frames the women for being involved in trying to steal the cyber weapon. The women manage to bring some justice to this villain, but they must go under deep cover to escape prison. This sets the stage for a possible sequel.

As noted above, THE 355 has a lot of twists. The movie seems to have too many twists, however, and a few of the twists don’t make complete sense. Also, the movie contains some obscenities, including an “f” word, plus a GD profanity and lots of intense action violence with a high body count. Finally, there’s a light feminist subtext that pops up by the movie’s end. The movie portrays a world where governments are corrupt, with selfish, duplicitous bureaucrats, including the CIA. Of course, MOVIEGUIDE® and many Christian and conservatives are not fans of big government bureaucrats, but the movie’s feminist subtext seems to offer a light liberal, leftist feel to this depiction. It seems to us at MOVIEGUIDE® that, in Britain, Germany and America, you can have a healthy skepticism and even hostility toward big government bureaucrats, without abandoning one’s patriotic loyalty to and admiration for the good things in those countries. Especially when it comes to any of the country’s Christian, biblical, morally uplifting aspects.

Finally, in the third act, a female Chinese spy helps the heroines fight the bad guys. The movie makes no references to the brutal communist government that runs China. This is strange, but the filmmakers and the movie studio probably want to sell their movie in China.