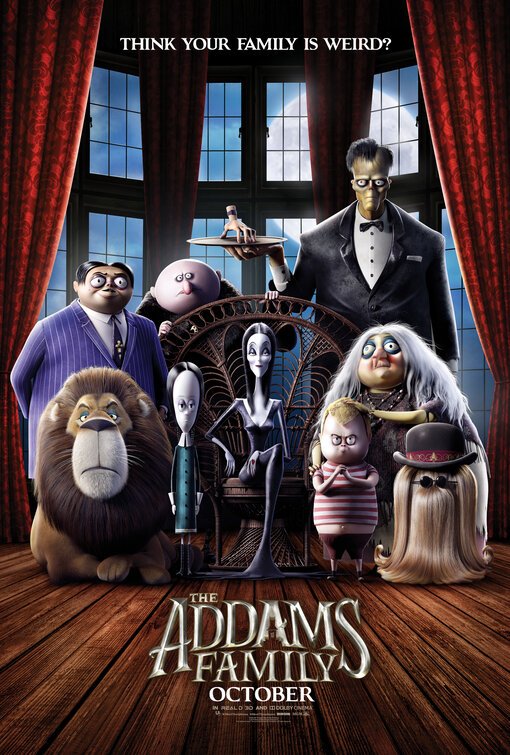 THE ADDAMS FAMILY animated horror comedy is presented as a family movie, but requires discernment for dealing with the ins and outs of raising quirky children and dealing with other goofy family members. The movie opens with Gomez and Morticia’s wedding, which is crashed by an angry mob who call the Addams “monsters” and want the family out of their community. Hurt by years of misunderstanding, Gomez and Morticia flee to the darkest place they know: New Jersey! They encounter more unwelcoming people.

At its core, THE ADDAMS FAMILY is about family, but viewers may have a hard time pushing through the darkness to discern redeeming values. The animated movie is often clever but it’s also often disturbing. In addition, its melancholy humor detracts from the light redemptive, moral worldview, which extols family, as well as tradition, being kind to strangers, and forgiving those who hurt you. The movie also has some Romantic, politically correct elements about living one’s own truth. Finally, there are some overt pagan, occult elements, including one scene where Morticia conducts a séance to speak with her dead parents. MOVIEGUIDE® advises extreme caution.

(PaPa, C, B, PC, Ro, OO, Ho, VV, S, N, MM):
Dominant Worldview and Other Worldview Content/Elements:
A mixed worldview with light, subtle redemptive, moral elements that promote kindness toward all people and forgiveness for those who’ve hurt you and stress working with your family and loving one other despite creepy and kooky behavior, one character tells others popularity is fleeting and it’s important to stand up for your friends, mixed with some overt pagan, occult elements in multiple scenes such as one scene features a séance and communicating with the dead through a Ouija board like a cellphone, the family home is haunted by a spirit, the family owns a decoration that shows toy people bowing to a giant vase while chanting, the tree swing is made of a witch’s broom, one character makes references to imprisoning souls, another character has horns like the devil and bursts into flames during a dance, a child appears demonic and climbs the walls, plus a subtle, possible homosexual reference where two high-school girls who appear to be twins always hold hands/link arms and wear rainbow jackets, as well as some Romantic, politically correct elements and lines (including one line saying each person must live their own truth) but sometimes implicitly rebuked, also tradition is extolled but the family also tweaks the tradition to accommodate a child’s abilities
Foul Language:
No obscenities and no apparent profanities
Violence:
Strong violence, often comical such as the entire character premise is built around dark humor and media-wise viewers may not be comfortable with violent jokes about explosions, children being thrown in cages or references to blood, a child plays with explosives, family members throw axes at one another, one character beheads her dolls, blood drips from walls, family members shoot each other with arrows, heads spin around, one character buries another alive, heads without bodies sing a cappella, character sleeps in a guillotine, people attack each other with torches and pitchforks, car hits a character
Sex:
Implied pornography use as a hand looks at pictures of feet (meant as a joke)
Nudity:
Upper male nudity and implied nudity as one character flashes a crowd and bats fly out from his coat
Alcohol Use:
No alcohol use
Smoking and/or Drug Use and Abuse:
No smoking or drugs; and,
Miscellaneous Immorality:
Strong miscellaneous immorality and problems include daughters disrespect mothers, child engages in violence against his father, character jokes about creeping into someone’s house, neighbors are spies and gossips, children are cage-schooled, teenage rebellion through clothes and makeup, child runs away, some animals come back to life after a Frankenstein-like project at school, villain wires houses with spy cameras, and villain encourages neighbors to attack anyone who looks different.

Though presented as a family movie, THE ADDAMS FAMILY requires significant discernment as the popular dark family deals with the ins and outs of raising children and dealing with extended family members.

The movie opens with the wedding of Gomez and Morticia, which is crashed by angry people who call the Addams “monsters” and want the family out of their community. Hurt by years of misunderstanding, Gomez and Morticia flee to the darkest place they know: New Jersey.

On the road to New Jersey, it’s implied that the new couple may be enjoying some romance when their car, driven by a hand named Thing, hits an escaped mental asylum patient named Lurch. When Lurch comes back to life a la Frankenstein’s monster, the couple hands him their luggage and make their way to the abandoned asylum, which will now be their new home.

The couple starts a family in the asylum which is a haunted mansion, welcoming children Wednesday and Pugsley. Wednesday has nooses in her braids and sleeps in a guillotine. Pugsly is obsessed with explosive devises. Now, 13 years after the Addams left “the old country” for New Jersey, it’s time for the extended family to come to their home for Pugsley’s mamushka, a traditional sword dance meant to demonstrate that a boy can protect his family.

As the rest of their extended family journeys to join them at the asylum, they must cross through Assimilation, a bright, happy town down the mountain from the Addams’ family mansion. The message of the aptly named Assimilation is clear: Why be different when everyone can be the same? There’s even a song about it.