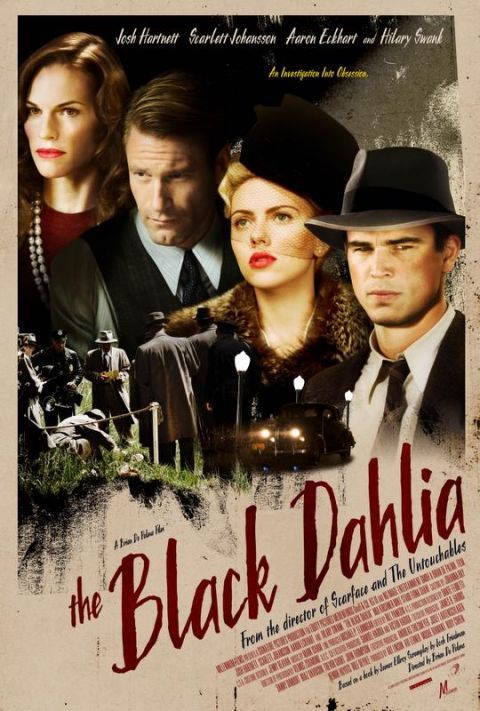 THE BLACK DAHLIA is based on a murder in 1947 Los Angeles. The mystery starts when the mutilated body of a promiscuous would-be actress in her 20s, Elizabeth Short, is found in a vacant lot. Dubbed "The Black Dahlia," the victim becomes the obsession of Det. Lee Blanchard, the partner of Det. "Bucky" Bleichert, who narrates. Bucky is attracted to Lee's girlfriend, Kay, but lays off out of loyalty to his friend. Lee becomes obsessed with solving the case. Bucky turns up evidence leading him to Madeleine Linscott, the rich bisexual daughter of a crooked real-estate tycoon and his alcoholic wife. Maddy looks like Elizabeth. Bucky becomes obsessed with Elizabeth's murder as he starts an affair with Maddy. His investigation uncovers a sordid tale of ambition, lost dreams, deceit, sex, and madness.

THE BLACK DAHLIA plays like campy, melodramatic soap opera. The actors try their best but are undercut by corny dialogue and the bizarre, but hilarious, performance by Fiona Shaw as Maddy's alcoholic mother. Shaw's performance matches the campy melodrama but detracts from the more realistic acting. The movie contains excessive foul language, violence and extreme sexual immorality.

(PaPaPa, HoHoHo, B, LLL, VVV, SSS, NN, A, D, MMM) Very dark pagan world full of irredeemable corruption, sexual perversion, weak people being victimized, madness, and obsession, plus very strong references to homosexuality include a graphic lesbian scene leaving little to the imagination and some light moral elements include police detective gets morally upset while watching nude porno movie with murdered female victim; at least 29 obscenities (including many "f" words), eight strong profanities, two light profanities, and some vomiting at crime scenes; extreme violence with some blood includes killer slices woman's cheek, dead woman's mutilated naked body with blood drained shown in gray light in autopsy room and from afar at crime scene, blood on mattress where woman was mutilated, shootings, man's throat sliced, two men fall three or four stories in high stairwell in lobby, head of falling man sliced by sharp piece of fountain, boxer gets teeth knocked out in bloody scene, other boxing violence includes man's nose getting bloodied, blood splatters during gunshot suicide, clinical but vague description of woman's body being mutilated (no sense to repeat it here), implied cremation, and attempted strangulation; extreme sexual content especially in lesbian scene in fictional porno movie with implied sodomy (which is gruesome to watch though implied) and shown twice, scenes of implied fornication, detective visits lesbian nightclubs, shots of women kissing, one woman is bisexual, one promiscuous woman who visits lesbian clubs and apparently tries to prostitute herself with men too turns out to be only 15 in the movie's story, woman and men lie in bed with women; shots of upper female nudity, some shots of rear nudity, women in underwear, and some upper male nudity; alcohol use; smoking; and, police hide evidence, deceit, corruption, revenge, greed, and madness.

Brian De Palma, the bloody director of such horror movies as CARRIE, thrillers like DRESSED TO KILL, and classics like MISSION: IMPOSSIBLE and THE UNTOUCHABLES, has always had an operatic style. In fact, one of his earliest movies was PHANTOM OF THE PARADISE, a quirky rock opera spoof on PHANTOM OF THE OPERA. The operatic baby carriage scene in THE UNTOUCHABLES is one of the most exhilarating, suspenseful slow-motion sequences in film history. Sometimes, however, De Palma gets carried away. Such was the case with his adaptation of Tom Wolfe’s novel THE BONFIRE OF THE VANITIES and such is the case with THE BLACK DAHLIA, De Palma’s adaptation of James Ellroy’s hardboiled detective novel THE BLACK DAHLIA. The movie is so campy and so over the top that it’s hard to take seriously. It may be the most disappointing movie of the year.

Based loosely on a true murder case in 1947 Los Angeles, the chief mystery starts when the mutilated body of a promiscuous would-be actress in her 20s, Elizabeth Short, is found in a vacant lot. Dubbed “The Black Dahlia” by the people who knew her, the victim’s death becomes the obsession of Det. Lee Blanchard, the partner and friend of Det. Dwight “Bucky” Bleichert, who narrates the story.

Lee is involved with a beautiful blonde named Kay, whom he saved several years ago from a brutal bank robber, soon to be released from prison. Kay is getting a little tired of waiting for Lee to marry her, however. She’s clearly interested in Bucky, but Bucky is no back-stabber, and he keeps his relationship with Kay chaste and platonic.

As Lee becomes more obsessed with solving the case, Bucky turns up evidence that leads him to Madeleine Linscott, the rich bisexual daughter of a crooked real-estate tycoon and his alcoholic, bitter wife. Maddy looks like Elizabeth, and Bucky himself becomes obsessed with Elizabeth’s murder as he starts an affair with Maddy. His investigation uncovers a sordid, nightmarish tale of ambition, lost dreams, deceit, sexual perversion, and madness.

De Palma’s usual operatic style simply does not work with this genre. THE BLACK DAHLIA plays like a campy, overly melodramatic soap opera. The actors try to do their best, but their best efforts are undercut by some corny dialogue and the bizarre, but hilarious, performance by Fiona Shaw as Maddy’s crazy alcoholic mother. Shaw’s performance is in keeping with the campy melodrama of De Palma’s approach, but it detracts from the more realistic acting from the rest of the cast. That said, the movie does evoke De Palma’s usual themes of obsession, madness and sex.

In that light, it may be important to note that Elizabeth Short was nicknamed The Black Dahlia because of a detective movie out at that time, called THE BLUE DAHLIA. This movie was written by detective novelist Raymond Chandler, one of the inventors of this style of detective fiction. Unlike the anti-heroes in this movie, and many other contemporary movies, Chandler’s detective hero in his novels remained a good knight. He was a tarnished knight, to be sure, and a tough egg, as they used to say, but he always retained a strong sense of moral integrity. Too many urban heroes in today’s cinema seem to have lost that sense of morality and chivalry. Apparently, the further away Hollywood moves from the Christian traditions of the past, the worse our urban heroes become. Ultimately, THE BLACK DAHLIA seems to present viewers with a nihilistic vision of the human condition. Its vision may not be intentionally malicious, but it is very dark.