THE HOUSE NEXT: DOOR MEET THE BLACKS 2 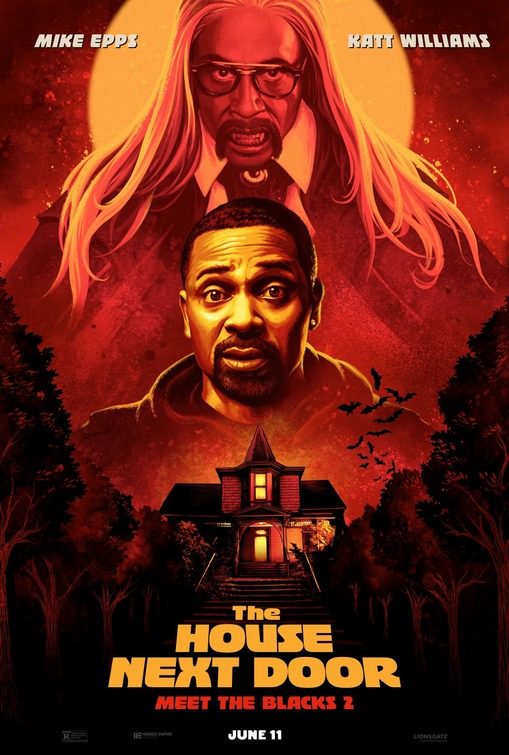 THE HOUSE NEXT DOOR: MEET THE BLACKS 2 is a sequel to a 2016 horror comedy. The prior movie was a feeble spoof of THE PURGE movies. In the new movie, the Black family relocates to the Atlanta area. Carl, the father, works on a book about his experiences depicted in the first movie, until he finds out there are mysterious neighbors moving in next door. The neighbor turns out to be a vampire running a house of ill repute.

MEET THE BLACKS 2 is sloppily made, with cheap-looking special effects and dialogue that seems mostly improvised. There’s very little in the way of a coherent plot flow, just a manic series of scenes jumbled in a way doesn’t make coherent sense. Despite the movie’s frequent crudeness and cheap look, the two male leads, Mike Epps and Katt Williams, somehow manage to draw some chuckles with their absurdly spirited performances. However, it’s a case of too little, too late. The constant lewd language and behavior, and brief nudity, in MEET THE BLACKS 2 will turn off media-wise moviegoers of all ages.

(PaPaPa, C, LLL, VV, S, NN, A, DD, MM):
Dominant Worldview and Other Worldview Content/Elements:
Very strong pagan worldview, but there are two Christian references when a character makes the Sign of the Cross and a crucifix through the heart kills the lead vampire;
Foul Language:
At least 70 obscenities (including at least 33 “f” words), 12 GD profanities, five Jesus profanities, some light profanities, and 19 “n” words
Violence:
Strong violence includes bloodless supernatural violence in the climax as men fight off vampires trying to bite them, and a man non-graphically stabs a vampire through the heart, and the vampire bursts into flames before dying
Sex:
A great deal of sexual humor in dialogue referring to prostitutes, pimps, sexual positions, and uses of “f” word in sexual matters, a man is seen under a blanket, and it’s implied he’s performing oral sex on a woman who makes pleasurable facial expressions, two scenes where wife touches her clothed genitalia while her husband watches, the house next door is accused of being a whorehouse, several women are seen tied up to a kinky sado-masochistic sexual device, a sex toy is clearly seen lying atop a bed, a few scenes of dirty dancing between couples on a crowded dance floor, and men ogle a woman who is salaciously posing while washing a car
Nudity:
One woman is topless as she looks alluringly at a man and several women are seen in lingerie bras and underwear while tied to a sexual device
Alcohol Use:
Alcohol use at a party
Smoking and/or Drug Use and Abuse:
No smoking but discussion of marijuana and a joke about teenagers doing drugs; and,
Miscellaneous Immorality:
Characters constantly insult each other.

THE HOUSE NEXT DOOR: MEET THE BLACKS 2, a thoroughly unnecessary sequel to 2016’s MEET THE BLACKS, which only made $9 million and would never seem to be a movie that would become a franchise, follows the titular family as they relocate and find themselves living next to a mysterious house with a pimp vampire running a house of ill repute. Sloppily made on every level and constantly crude in both its construction and its content, MEET THE BLACKS 2 occasionally elicits some chuckles due to the manic energy of its lead performers.

The prior movie was a feeble spoof of THE PURGE series of films, as the Black family (a family that’s black racially as well as by name) moved into a white suburb and found themselves having to fight overnight to survive among their secretly hostile new neighbors. The new movie finds the Black family relocating to the Atlanta area, where father Carl (Mike Epps) works on a book about his experiences depicted in the first movie, until he finds that there are mysterious neighbors moving in next door.

A neighborhood spy named Snitch says he’s seen the neighboring house entered all night long, but that no one ever seems to move on the property during daylight. Carl and his ne’er-do-well brother-in-law Cronut (Lil Duval) vow to find out what’s the story with the new neighbors, whom they soon come to believe are vampires running a house of ill repute from their property.

The lead neighbor, Dr. Mamuwalde (Katt Williams), soon uses mind tricks to try and steal Carl’s wife and teenage daughter away and use them for his dark purposes. Carl teams up with Cronut, Snitch and other hapless neighborhood residents to try and save his family before they are turned into vampire prostitutes. Will he succeed?

MEET THE BLACKS 2 is sloppily made, with cheap-looking special effects and dialogue that seems mostly improvised. There’s very little in the way of a coherent plot flow, as Director/Co-Writer Deon Taylor jumbles together a manic series of scenes in a way that often doesn’t fully make coherent sense.

Despite the movie’s frequent crudeness and cheap look, Mike Epps and Katt Williams somehow manage to draw some chuckles with their absurdly spirited performances. However, it’s a case of too little, too late, and the movie’s constant crude language, occasional shots of sex and brief nudity make MEET THE BLACKS 2 a movie that media-wise moviegoers of all ages will want to avoid.