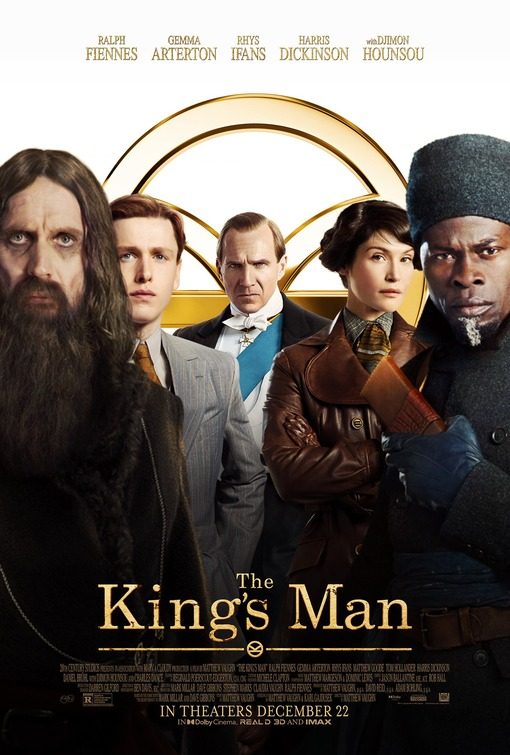 THE KING’S MAN tells an elaborate, epic action adventure story. After the Duke of Oxford is widowed in 1902, he raises his son with the help of his assistant, a former African solider, and his maid, Polly. The Duke is friends with the King of England and the King’s top military advisor, Lord Kitchener. When World War I breaks out, the Duke uses a private spy agency he’s developed with Polly and his assistant, Shola, to help England and its allies. However, they discover there’s a secret criminal cabal working behind the scenes to make sure England is destroyed.

THE KING’S MAN inserts several exciting, entertaining action setpieces into this epic plot. The movie is also surprisingly moving as it portrays the changing relationship between the Duke of Oxford and his son. Eventually, the Duke realizes his pacifist ideals are flawed, and, sometimes, people must take up arms to prevent an even greater evil from taking place. That said, THE KING’S MAN contains lots of strong foul language and some extreme violence. There’s also some lewd innuendo. So, MOVIEGUIDE® advises extreme caution.

(BB, PP, CC, Ho, LLL, VVV, S, N, AA, D, M):
Dominant Worldview and Other Worldview Content/Elements:
Strong moral, patriotic worldview with some overt Christian references in an action adventure, spy story where a man eventually realizes that his pacifist ideals are flawed, and that, sometimes, people must take up arms to prevent an even greater evil from taking place, plus movie displays a strong father-son relationship where it’s decided that a terrible sacrifice must not be paid in vain, and one character is depicted as a ladies man who also enjoys homosexual affairs with young men
Violence:
Some extreme violence and lots of strong action violence includes war scenes, sniper takes out bad guys and there’s some blood spray, two men shot dead in forehead, elaborate sword fight, man dangles from high cliff and nearly falls to his death, miscellaneous fighting, explosions, foreign leader is assassinated to start a war, man carries a wounded soldier across No Man’s Land and back to his lines in the trenches, an attempt to bomb a foreign leader is foiled, a villain is poisoned with cyanide and stabbed but survives before being shot dead, sniper shoots man in leg and fatally wounds man’s wife, implied decapitation of a guard after a fight
Foul Language:
29 obscenities (mostly “f” words), one light profanity and poisoned man vomits out the poisoned cake he ate, saying he’s been taking small amounts of cyanide to build up a tolerance to it
Sex:
Female spy seduces President Wilson in one scene, and Rasputin is portrayed as a ladies man who also likes young men, so good guys use a young man to lure him to his death by serving him a poisoned sweet cake
Nudity:
Upper male nudity
Alcohol Use:
Social drinking and man becomes despondent after a tragedy and resorts to drink
Smoking and/or Drug Use and Abuse:
Some smoking, but no drugs; and,
Miscellaneous Immorality:
President Wilson is blackmailed, hero’s son sneaks behind his back and enlists in the military during World War I under another name, family tragedies occur, and weird mystic licks scar on man’s leg and then dumps the man in freezing water to heal the man’s limp.

THE KING’S MAN tells an elaborate, epic action adventure story about how a private spy agency helps England and its allies defeat Germany in World War I and confront an evil international criminal cabal plotting to destroy England and control the major European powers. Filled with historical references, THE KING’S MAN offers plenty of action and has a surprisingly moving father-son relationship in the story, but it’s rated R for lots of strong foul language and some extreme violence.

The movie opens in 1902 in South Africa. Working for the Red Cross, Orlando Oxford and his wife, Emily, and their son, Conrad, visit one of the concentration camps the British government ran to control the Dutch colonists fighting against them. Sadly, Emily is shot dead, and the Duke of Oxford is seriously wounded in the leg by Dutch snipers in the nearby mountains.

Twelve years later, in 1914, Conrad is a young man who wants to join the army. However, his father, the Duke, has long been a pacifist, even before his wife was killed in South Africa.

Meanwhile, there’s an evil cabal, consisting of infamous historical figures led by a crazed Scotsman called The Shepherd who hates England, King George V and the King’s cousins, Kaiser Wilhelm of Germany and Tsar Nicholas of Russia. Despite the efforts of the Duke and Lord Kitchener, a powerful military leader in England at the time, the Shepherd starts World War I by having the Duke’s friend, Archduke Franz Ferdinand of Austria, assassinated.

The Duke reveals to his son, Conrad, that he, the son’s nanny, Polly, and the Duke’s assistant, a former African soldier named Shola, have formed an independent spy agency called Kingsman. Using an international network of servants, butlers and maids, Kingsman has been working behind the scenes to stop the winds of war. Now, however, Kingsman is working to defeat Kaiser Wilhelm and Germany.

However, two years into the war, the Russian people are growing weary of the war to end all wars. The Shepherd orders Rasputin, the crazy religious charlatan who’s tricked the Tsar Nicolas and his wife, Alexandra, to convince Nicolas to pull out of the war. So, the Duke, Conrad, Shola, and Polly travel to Russia to attend an international dinner party and kill Rasputin. Meanwhile, the Shepherd has ordered Mata Hari, the famous German spy, to blackmail U.S. President Wilson to stop America from entering World War I.

Eventually, the heroes learn about the evil cabal and decide to target the leader.

THE KING’S MAN offers a wacky combination of real history with a fantastic spy story. The evil cabal in the movie is like something out of a James Bond novel. In the early James Bond novels, Ian Fleming’s famous spy was usually fighting Russian agents. However, in the early 1960s, Fleming decided that the Cold War might end in two years, so he invented a secret syndicate of criminal terrorists and extortionists called SPECTRE. THE KING’S MAN envisions its evil criminal syndicate trying to goad Kaiser Wilhelm into waging war against France and Russia, which would draw England into the war. Filled with Scottish hatred toward England, the cabal’s mysterious leader reasons that England could not survive a war against the industrial might of Germany. So, that’s why he tries to get Russia to leave the war and prevent America from entering the war.

THE KING’S MAN inserts several exciting, entertaining action setpieces into this epic plot. The movie is also surprisingly moving as it portrays the changing relationship between the Duke of Oxford and his son. This personal story, the epic plot, the action, and the historical material make a sensational, enjoyable story. Because of the historical material, the story has an epic feel that’s different than the usual action adventure and spy movie.

THE KING’S MAN also has a strong moral, patriotic feel to it. It doesn’t shy away from the horrors of war, including the terrible horrors of the trench warfare that epitomized World War I. Eventually, though, the Duke realizes that his pacifist ideals are flawed and that, sometimes, people must take up arms to prevent an even greater evil from taking place.