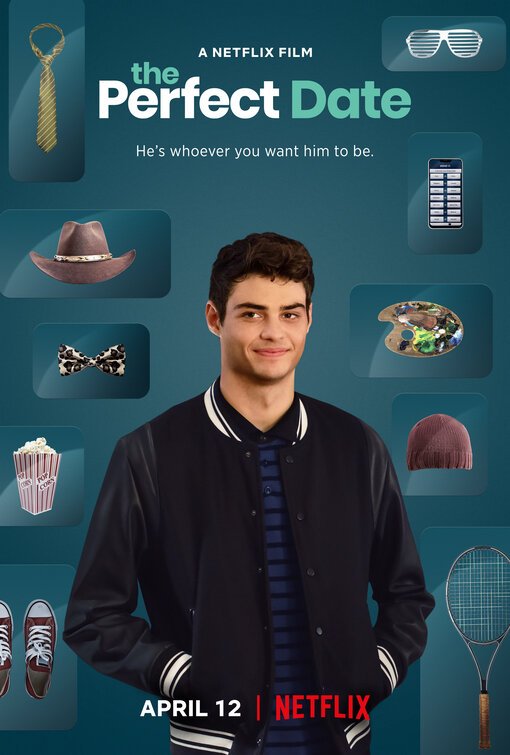 THE PERFECT DATE follows Brooks Rattigan as he tries to find a way to get into his dream college, Yale University. Brooks and his programming genius friend, Murph, develop an app where people can request Brooks to be their stand-in date. Business starts booming. However, Brooks loses himself in making money and puts his family, Murph and his new friendship with his first stand-in date, Celia, at risk.

THE PERFECT DATE is a predictable yet charming, funny and satisfying teenage romantic comedy. The two leads have great chemistry. However, the writing relies heavily on clichés and is sometimes slow in developing the characters into the likeable people the audience wants them to be. THE PERFECT DATE has a strong Romantic worldview where the main character gets caught up in making money to go to the school of his dreams and trying to get the girl of his dreams. There is some morality, though. Brooks eventually realizes that family and friends matter more than material things. That said, THE PERFECT DATE has too much unnecessary foul language, so MOVIEGUIDE® advises caution.

(RoRo, B, CapCap, Ho, LLL, V, M):
Dominant Worldview and Other Worldview Content/Elements:
Strong Romantic worldview where character romanticizes getting into his dream school and getting his dream girl, two characters fall in love after being friends, but there’s some light moral elements that include positive family portrayals, character realizes that family and friends matter more than material things and money and comes clean in his lie, character also realizes he needs to be thankful for what he has, and some strong capitalist elements, plus there’s a homosexual character where the audience can see he has a crush on someone who comes into where he works
Foul Language:
19 obscenities, 12 light profanities (mostly OMGs), and one scene where character talks about going to the bathroom
Violence:
Girl slaps guy in the face during fake breakup
Sex:
No sex scenes or sexual immorality but there are two kisses between couples, and a guy kisses his guy friend on the neck as a joke for being thankful for him
Nudity:
No nudity
Alcohol Use:
No alcohol
Smoking and/or Drug Use and Abuse:
No smoking or drugs; and,
Miscellaneous Immorality:
Lying, greed, selfishness, two characters in a fake dating relationship, and characters are very sarcastic in their banter towards one another.

THE PERFECT DATE opens with Brooks Rattigan writing a college admissions essay for his dream school, Yale. When Brooks reads it to the school counselor, she informs him that he has the grades, but needs more extracurricular activities on his application.

Brooks knows that’s not the only thing he needs to get into Yale. He also needs the money. His dad, Charlie, stopped writing books and is a professor at the University of Connecticut once every two weeks and doesn’t have much income. Charlie always assumed his son would go to UConn since he gets the discount, but Brooks thinks he’s better than a public university.

Brooks and his best friend, Murph, who’s also a programming genius, work at a local sub shop and talk over Brooks options. When a popular guy from school, Reese says he’s being paid to take his cousin, Celia, to her school formal, Brooks tells Reese he’ll take his cousin if he could keep the money. Reese agrees.

Brooks shows up to Celia’s house in the rich part of town to pick her up and is surprised when she’s a strong-willed, edgy girl who loves being sarcastic. They head to the dance where Brooks meets the girl of his dreams, Shelby. Celia thinks it’s funny and ends up faking an injury to get Brooks to take her home early.

When Brooks tells Murph about the night the next day, he realizes he’s a pretty good stand-in date. Murph ends up coding an app where people can request Brooks to be their stand-in for a fee that will go toward his dream of Yale. Brooks’ business quickly gets off the ground, and he’s busy all the time.

Brooks’ booming business ends up causing a rift between him and Murph, but Celia liked hanging out with Brooks more than she revealed and a unique friendship starts to blossom. Brooks and Celia devise a plan to fake date and then break up in front of the two people they’re trying to really impress, but Celia catches romantic feelings that could ruin everything. Brooks’ business could also ultimately be his downfall when he gets too caught up in making money and forgets about what’s important in life.

THE PERFECT DATE is a predictable yet charming and funny teenage rom com that does exactly what it’s supposed to do for its audience. The two leads have great comedic chemistry and bounce easily off one another. However, the writing relies heavily on clichés and is sometimes slow in developing the characters into the likeable people we want them to be.

THE PERFECT DATE has a strong Romantic worldview where the main character gets caught up in making money to go to the school of his dreams and trying to get the girl of his dreams. There is some morality, though. The main character realizes he’s romanticized this life for himself, but in reality, family and friends matter more than material things or money. That said, THE PERFECT DATE has too much unnecessary foul language, so MOVIEGUIDE® advises caution.