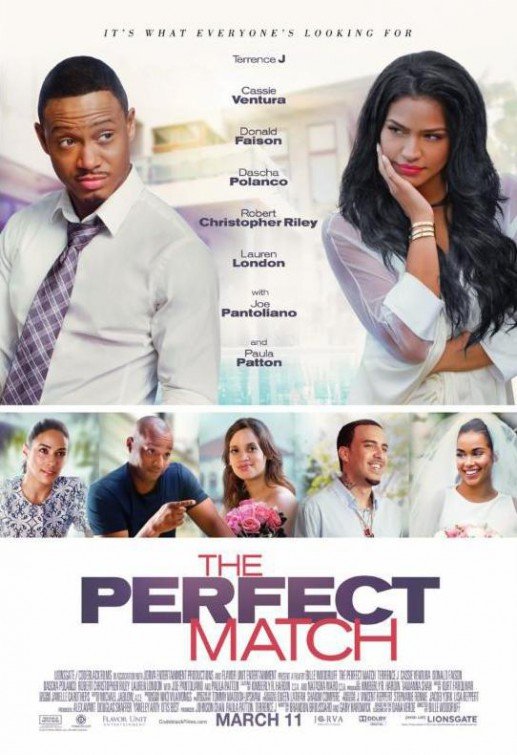 THE PERFECT MATCH is about Charlie Mack, a young professional black man whose four childhood friends challenge his playboy lifestyle. Two friends are married, and two are getting married. The two male friends in these relationships, Rick and Victor, bet Charlie that, if he dates only one woman until Victor’s upcoming wedding, Charlie will decide the playboy lifestyle isn’t satisfying after all. Charlie starts regularly seeing Eva, a woman he met briefly at work, and his views do begin to change. However, an unexpected plot twist shatters Charlie’s world, and he must pick up the pieces.

THE PERFECT MATCH is filled with many “f” words and other foul language. Also, Charlie’s relationship with Eva is definitely rated R, as is some of the movie’s dialogue about sex and romance. In the second half, Charlie discovers Eva has a secret. This shatters his world. Meanwhile, Charlie’s boss wants him to do something Charlie considers unethical. THE PERFECT MATCH eventually concludes true love is better than meaningless sexual relationships and working at a job you hate. The movie’s negative content is too unacceptable, however.

(PaPaPa, FRFR, C, B, LLL, V, SS, NN, AA, M) Very strong mixed pagan worldview includes hedonistic, antinomian attitudes and behavior, which sometimes seem validated, and a couple references to karma, but with Christian, moral ending and premise that resolves the plot problem and overcomes most of the movie’s hedonism; about 82 obscenities (including many “f” words), five strong profanities and two light profanities, plus a reference to urine on a pregnancy test stick; a couple light comical punches, but not out of anger; depicted bedroom kissing includes implied nudity, partial thrusting, implied fornication, references to fertility clinic and sperm count, and some crude sexual comments and references, plus committed playboy says he loses interest in a woman after they fornicate; partial rear female nudity and upper male nudity, plus plenty of female cleavage; alcohol use and drunkenness; no smoking or drugs; and, lying, cheating, boss orders employee to lie to a client and not reveal the better deal they could have gotten for the client, protagonist lashes out angrily at his best friends but later apologizes after he comes to realize how wrong he really was, and a reference to the superstitious pagan practice of feng shui.

THE PERFECT MATCH is about a young professional black man who finds his playboy ways challenged by a new relationship with a female executive that turns serious. THE PERFECT MATCH is a schizophrenic movie, with the first half containing lots of salacious content until a twist in the second half leads the protagonist to re-examine himself and decide that true love is better than meaningless sexual encounters and working in a job you hate.

The movie opens with a dinner date arranged by four friends for their childhood friend, Charlie Mack, a talented dealmaker at a Los Angeles talent agency. Charlie, however, is a committed playboy, and he brings a date to the dinner meeting with the girl in question and his friends. At the dinner, he reminds his friends about his rule never to date a friend of his friends. Unlike them, he’s only interested in sex, so going out with a friend of one of his friends will only end in both the friend and the friend of the friend becoming mad at him. So, thanks but no thanks, he tells them.

Two of his friends at the dinner, Rick and Pressie, are married and trying to have a baby. The other two friends, Victor and Ginger, have been in a committed relationship since middle school and are about to get married.

One day while jogging with Rick and Victor, Charlie spies Eva, a beautiful woman he met briefly at the company for which he works. His two friends, Rick and Victor, challenge him to date the woman until Victor’s wedding to Ginger. They bet that, if Charlie takes a relationship more seriously, he will become attached to Eva and discover maybe it is time to settle down.

Sure enough, as Charlie spends more time with Eva, in and out of bed, he starts to become more attached to her. In the middle of the movie, however, a major plot twist occurs that shatters Charlie’s world, not only his new attempt to be more than a playboy, but also his life at work, where Charlie’s jaded, demanding boss has added some new things that Charlie deems unethical to a major deal Charlie’s been planning for the company and some clients. With his well-paying job at stake and his new assumptions about romance and love all but destroyed, Charlie must try to pick up the pieces of his shattered world. Charlie’s sister, a compassionate therapist, tries to help him.

THE PERFECT MATCH is filled with many “f” words and other foul language. Also, Charlie’s relationship with Eva is definitely rated R, as is some of the movie’s dialogue about sex and romance. However, in the movie’s second half, Charlie lashes out at his friends when a hidden piece of knowledge comes to light and shatters Charlie’s world. Knowing he’s done a really bad thing, Charlie begins to re-examine himself. Eventually, he decides that true love is better than meaningless sexual relationships and working at a job he hates. So [SPOILERS FOLLOW], Charlie decides to shed his playboy lifestyle, quit his job working for his unscrupulous boss, and become the professional photographer he has always wanted to be. Everything is resolved nicely at Victor and Ginger’s wedding ceremony featuring a Christian minister. At one point during all this, Charlie’s friend Rick says, “God is good.”

Despite the positive ending, the pleas for Charlie to settle down and a few religious lines like Rick’s, THE PERFECT MATCH has an antinomian, or lawless, attitude toward vulgarity and premarital sex. Ultimately, it offers a mixed pagan worldview that’s schizophrenic, or double minded. In the beginning, though his friends tell Charlie to settle down, they otherwise don’t seem bothered by his treatment of women as sex objects. Also, until the conflicts with his friends and his boss come to a head, THE PERFECT MATCH is a bit boring. The raunchy parts of THE PERFECT MATCH will turn off many moviegoers, many of whom will walk out before the uplifting ending. The movie’s uplifting, positive parts aren’t just attached at the very end, so THE PERFECT MATCH avoids being thoroughly despicable or abhorrent, but it’s still not acceptable.