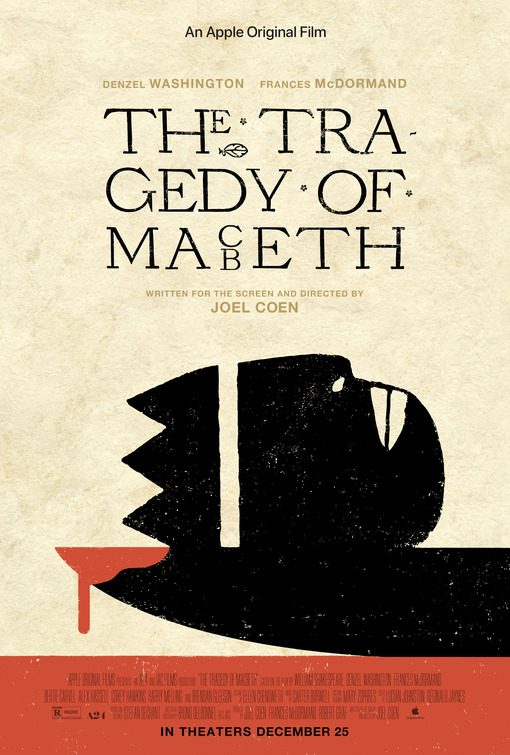 THE TRAGEDY OF MACBETH (2021) stars Denzel Washington and Frances McDormand in a black and white version of Shakespeare’s play. Three witches tell General Macbeth he will be Thane of Cawdor and then King of Scotland. So, when King Duncan appoints him Thane of Cawdor after a big battle, Macbeth and his wife decide to murder the King in his sleep when he visits their castle. Macbeth begins a reign of terror in Scotland. However, Macduff, the Thane of Fife, travels to England to convince Duncan’s son, Malcolm, to overthrow Macbeth by force.

Many visuals in THE TRAGEDY OF MACBETH are very striking, but the movie needs work. For example, the performances seem rather flat and restrained. Also, the movie misses some of the major dramatic beats in the third act, such as Macbeth’s feeling of despair when he learns his wife committed suicide. Finally, the victory over Macbeth’s tyranny is overshadowed by images connected to the three witches. Thus, what should feel like a triumph of good over evil in MACBETH feels like a victory for the evil witches who deliberately orchestrated everything.

(OO, B, CC, L, VV, A, M):
Dominant Worldview and Other Worldview Content/Elements:
In this version of the Shakespeare play, MACBETH, the three witches are so prominent that the ending, instead of feeling like a victory of good over Macbeth’s tyranny, feels instead like a victory of occult evil, as if the witches orchestrated everything that happens, even the victory of the assassinated king’s son, but the movie does retain the play’s moral premise that blind ambition leads to destruction, and there are some overt references to Christianity
Foul Language:
Four “d” words and one light profanity
Violence:
Strong violence includes talk about murder, talk about one battle, assassinated king’s body is discovered surrounded by blood, man kills two guards to hide his involvement in an assassination, assassin throws mother’s young son over a third story balcony into a fog bank below, woman kills herself off stage, armies and soldiers do battle, two men start to engage in a swordfight to the death, and the good guy later shows up carrying the bad guy’s decapitated head
Sex:
No sex
Nudity:
No nudity
Alcohol Use:
Alcohol use
Smoking and/or Drug Use and Abuse:
No smoking or drugs; and,
Miscellaneous Immorality:
Scary images of black crows and witches dressed in black, man plagued by guilt and paranoia sees scary visions.

THE TRAGEDY OF MACBETH (2021) stars Denzel Washington as the bloody general and Frances McDormand as the general’s bloodthirsty wife in William Shakespeare’s dark tragedy of blind ambition, guilt and paranoia. MACBETH is a dark play, but the director, Joel Coen, has made THE TRAGEDY OF MACBETH even darker, with the director using black crows to represent the three witches in the play, an image that overwhelms the ending of this lackluster version of Shakespeare’s work.

Like the play, the movie opens with the three witches planning to meet Macbeth on the heath and accompanied by images of black crows. “Fair is foul, and foul is fair,” they declare.

Cut to a wounded soldier informing King Duncan and his oldest son, Malcolm, of Macbeth’s bravery in a battle with Norway and Ireland, led by two Scottish traitors. Macbeth killed one of the two traitors, slitting him “from the nave to the chaps” and fixing “his head upon our battlements.” Norway unleashed a fresh assault, the sergeant reports, but the assault didn’t worry Macbeth or his friend, Banquo, another brave general in the King’s army. A Scottish nobleman appears and reports Macbeth’s victory over Norway’s forces, and the capture of the second traitor, the Thane of Cawdor. Duncan sentences Cawdor to death and orders Macbeth to take his place as thane, a royal Scottish official in charge of a particular territory.

Enter Macbeth and Banquo, who have no knowledge of King Duncan’s order to make Macbeth the Thane of Cawdor. The leader of the three witches, clothed in black and moving like a bird, informs Macbeth, who’s a cousin of King Duncan, that he will be Thane of Cawdor and eventually become King of Scotland. She and the other two witches inform Banquo that, though he won’t ever be a king, his descendants will form a long line of kings.

Macbeth tells his wife, Lady Macbeth about the prophecy. So, when King Duncan decides to come to Macbeth’s castle at Inverness to celebrate the victory, she convinces Macbeth to murder Duncan in his sleep. To do the bloody dead, Lady Macbeth drugs the guards with tampered wine and implicates them in the bloody crime. Then, when the murder is discovered, and they wake up the next morning, Macbeth pretends to be so angry that he kills them outright. Alarmed by the murder, Duncan’s son, Malcolm, escapes to England.

Macbeth begins a reign of terror in Scotland, and Macduff, the Thane of Fife, secretly travels to England to convince Malcolm to overthrow Macbeth by force. However, Macbeth has Macduff’s wife and son murdered while Macduff is in England.

With help from England, Macduff and Malcolm, plot an invasion of Scotland against Macbeth. Meanwhile, Macbeth, wracked by guilt and paranoia, seeks more advice from the three witches. However, their cryptic prophecies give Macbeth false hope, and Macbeth’s wife sinks into madness.

Shot in black and white, THE TRAGEDY OF MACBETH stresses the pallor of occult evil surrounding Macbeth and Scotland. Also, the performances seem rather flat. For example, although toward the end of the play, Macbeth becomes numbed by the reversals of fortune he starts to see, and he’s wracked by despair when he learns Lady Macbeth has killed herself. However, there’s no despair in Denzel Washington’s voice in his reactions at that point in the movie. Even Macduff’s reaction to his family’s murder seems too restrained. Finally, the victory over Macbeth’s tyranny is overshadowed by images of the black crows that symbolize the occult evil of the three witches. Thus, what should feel like a triumph of good over evil feels like a victory for the witches who deliberately orchestrated everything that occurs.

The visuals in THE TRAGEDY OF MACBETH are often very striking, but the script and acting need some work. In many ways, the movie resembles Director Orson Welles’ 1948 take on “the Scottish play.” Both movies are failures, though interesting failures.