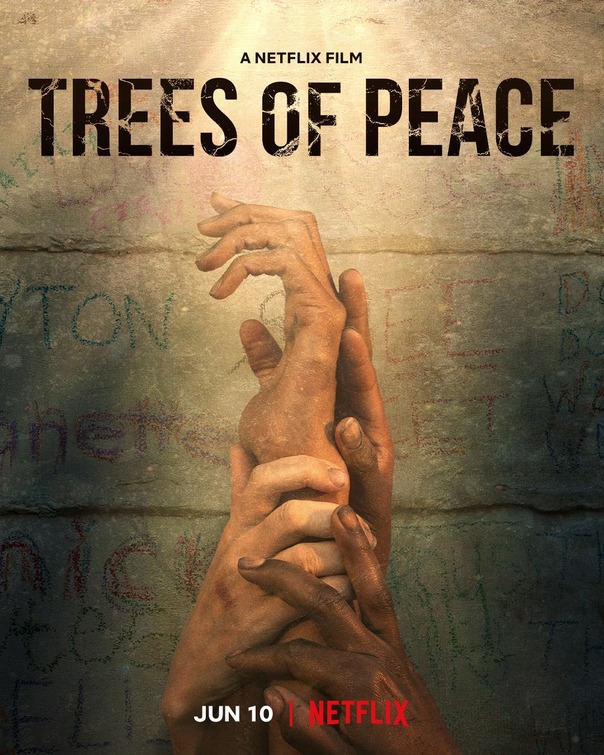 TREES OF PEACE is a horrific drama on Netflix about four women forced into hiding in 1994 during the Rwandan Genocide in Africa. The movie is inspired by multiple accounts of the Rwandan Genocide, where one million Tutsi people were slaughtered by the Hutu majority. Four women are hiding in a small cellar under a kitchen floor. They have meager supplies, so they’re constantly under threat of starvation. They have one small window from which they witness atrocities against the Tutsis by the Hutus.

TREES OF PEACE tries to be uplifting at the end. However, it consists of constant violence and repetitive drama. Also, the movie blames men for the genocide, even though the women rely on one woman’s husband to bring food and water regularly. TREES OF PEACE attacks the idea that religion is a viable solution to evil. Finally, though the violence takes place mostly off screen, viewers can hear the crimes taking place, including rape, torture and mutilation. TREES OF PEACE is too relentlessly disturbing. There’s not enough relief from the agony that the main characters witness and suffer.

(PaPa, C, HH, PCPC, FeFe, AbAb, LL, VVV, AA, MM):
Dominant Worldview and Other Worldview Content/Elements:
Mixed pagan worldview with some Christian, redemptive elements about love and community, but mixed with humanist, politically correct, feminist commentary and an attack on religion as a viable solution to evil and difficult situations
Foul Language:
Soldiers use profanity, including 4 uses of the “f” word, a few uses of God’s name in vain, a few other uses of profanity, and references to Tutsis as cockroaches
Violence:
Gang rape scene, brutal beatings mostly off-screen but with sound effects, man is forced to kill children, child kills other children, talk of castration and torture, main characters share stories of personal wounds, including incestuous rape, rape of their mother by their father, suicide attempts, and psychological abuse and gaslighting
Sex:
Depicted rape scene and talk about other rapes
Nudity:
No nudity
Alcohol Use:
Main character discusses her drunk driving incident where she killed her brother in the accident
Smoking and/or Drug Use and Abuse:
No smoking or drugs;
Miscellaneous Immorality:
Strong miscellaneous morality includes racism, citizens remain silent or even take part in killings to survive, and dysfunctional family depicted.

TREES OF PEACE on Netflix tells an horrific story about four women who are forced into hiding in 1994 during the Rwandan Genocide in Central Africa. The history depicted in TREES OF PEACE is an important piece of information to know, but the movie is too relentlessly disturbing and doesn’t provide enough relief from the agony that the main characters witness and suffer.

The women are from various backgrounds. They form an unbreakable bond which helps them survive over 80 days trapped under a floor, nearly starving to death. The history is important to tell. However, the repetition of intense violence, including off-screen gang rape with screams from the victim, brutal beatings, cruel psychological abuse, disturbing dialogue which includes the protagonists confessing she was raped, and another witnessed her mother repeatedly raped by her father and a priest, and other violence extreme caution for all audiences.

In 1994, the Hutu majority carried out a bloody massacre against the Tutsi minority where one million Tutsis were slaughtered in about 100 days. TREES OF PEACE is a story about four women, Annick, Jeanette, Peyton, and Mutesi, forced to hide in a small cellar beneath a kitchen floor in order to survive the genocide. Annick is a kind Hutu woman, who with her husband, Francoise, risks her life to save others from the massacre. Francoise lowers the women into the hole beneath his kitchen, until the violence is over. A teacher, he also hides his students in a separate building. The cellar locks from the outside. The women are trapped and depend on Francoise to bring them food and water for survival. Their supplies are meager, as Francoise sometimes can’t get to the women for 10 days at a time.

The women face challenges as they figure out how to co-exist in a tiny room, too small to even stand up. Annick is a cool-headed pregnant woman, who’s had four prior miscarriages. Jeanette is a Catholic nun trying to atone for the sins of her father. Peyton is an American volunteer, atoning for killing her little brother in a drunk driving accident. Mutesi is a young Tutsi woman filled with intense anger over repeated sexual abuse by her family members. The woman share their stories in between witnessing bloody atrocities outside their small window. They form an unlikely bond, which is instrumental in their survival.

TREES OF PEACE tries to get to peace. However, the movie consists of constant violence and repetitive drama and, ultimately, peace isn’t really delivered. The caption at the conclusion says that the women who received the worst treatment are spearheading a movement toward peace between the Hutus and the Tutsis. It also says that Rwanda has more government appointed women than any other country. Not only does this feel like a politically motivated narrative, it seems to be an implication that men are to blame for the Rwandan crisis. However, throughput the movie the four women rely on Francoise to them by regularly bringing them food and water. In the end, he’s the real hero in the movie. Also, it’s too big of a jump to watch 97 minutes of the worst type of human suffering, and then flip to a brief narrative about peace. TREES OF PEACE also contains a subtle attack on the idea that religion is a viable solution to evil and difficult situations. This is shown by the weak character of the Catholic nun in the movie.

Finally, though the violence takes place mostly off screen in TREES OF PEACE, viewers can hear the crimes taking place, including rape, torture and mutilation. Also, the hideaways witness one woman being raped, killed and eaten by dogs in the street, along with some “f” words and other obscenities and derogatory terms.

TREES OF PEACE is too relentlessly disturbing. There’s not enough relief from the agony that the main characters witness and suffer.