"Heartwarming Story About Faith and Redemption" 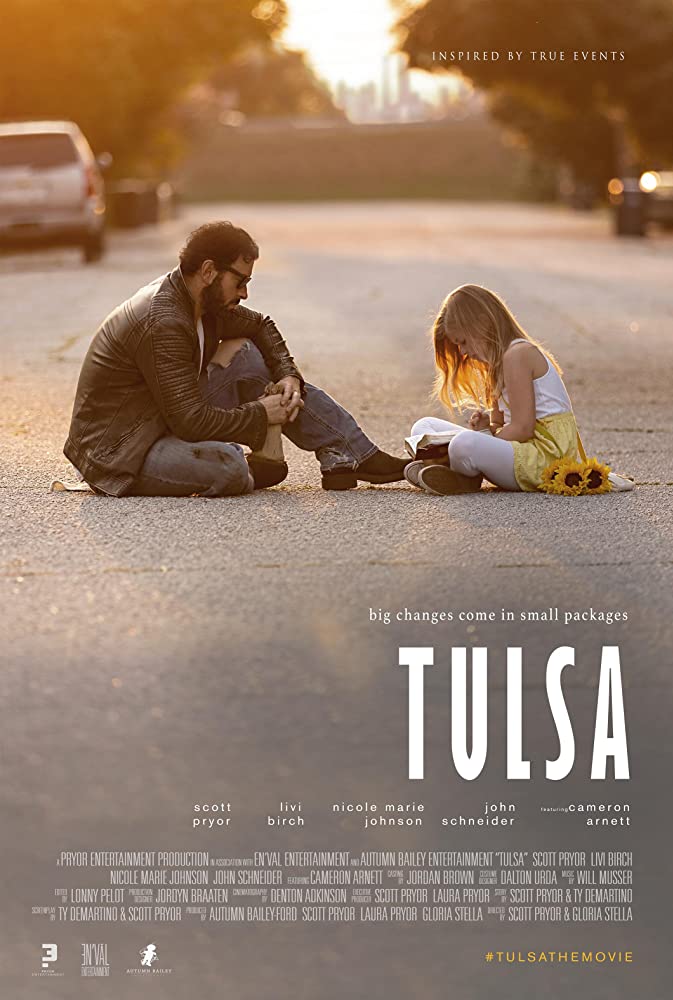 TULSA is a faith-based drama movie inspired by true events. In TULSA, a hopeless addict named Tommy Colston reluctantly invites a faith-filled 9-year-old named Tulsa into his home, since she might actually be his biological child. Both Tommy and Tulsa have troubled pasts involving addiction and things of the like that raise tensions. However, one of the most significant differences between the two characters is Tulsa’s strong faith in God and His Word Written, the Bible. As their relationship grows, Tommy and Tulsa must face the reality of their beliefs about faith, love and their broken pasts and personal pain.

TULSA is a heartwarming drama with a strong Christian worldview and some comedy to boot. Although the pacing sometimes wavers due to awkward shifts in tone, the emotional beats are still effective. They’re elevated by Josh Garrels’ music, which is heard throughout the movie. TULSA has strong Christian themes of redemption, forgiveness and love in the face of tragedy. MOVIEGUIDE® advises caution for older children because of depictions of alcohol and drug abuse, as well as an implied suicide of a pregnant woman.

(CCC, BB, Ab, VV, AA, DD, M):
Dominant Worldview and Other Worldview Content/Elements:
Very strong Christian worldview with biblical principles showing the power of God’s word for redemption, forgiveness and love in spite of suffering, open Bibles shown, a character attends church, a pastor gifts someone a Bible after sharing from it, a choir from the church sings “It is Well” to Tulsa, conversations about Jesus, faith and salvation throughout, cross necklaces worn by a few of the characters, a cross hangs on the wall of a home, lead character prays several times, a man puts on a funeral and uses a cross as the headstone, plus a man receives a Bible as a gift and throws it on the ground
Foul Language:
No obscenities or profanities, but a man begins to say h*** but is cut off
Violence:
Man gets into a fistfight and is arrested, a character is hit by a car (no blood or impact shown), early in the movie a man is holding a gun, and it is implied that he wants to commit suicide but is stopped by a phone call, later a women who is pregnant is shown wading into the middle of a lake implying she drowned herself (the scene ends after her head submerges), and a portion of the movie takes place in a hospital
Sex:
No sex
Nudity:
No nudity
Alcohol Use:
A man drinks hard liquor throughout the movie, a man drinks beer and smokes in front of a minor, and there is a story about someone being drunk
Smoking and/or Drug Use and Abuse:
Character uses drugs throughout the movie, a women takes drugs before trying to commit suicide in a lake, and a man tries to get clean from addiction and relapses;
Miscellaneous Immorality:
Revenge, stealing and brief name-calling.

The movie TULSA opens with two foster children, Tulsa and her stepbrother, Michael, hiding in a closet from an abusive foster mother. To their relief, the police show up, and their foster mother gets arrested. However, the two children are split up and are in dire need of finding a family.

Next, the movie cuts to a Friday night where a caseworker named Jaylene is leaving for the weekend but is asked to find Tulsa a home before she starts her weekend. Reluctantly, Jaylene goes to Tulsa and begins to explain the situation. Tulsa, who is praying and reading from the Bible, claims that her birth father is out there, and that she wants nothing more than to find him. At first, Jaylene is skeptical about Tulsa’s plan, but Tulsa shows her a picture of the man she thinks is her father, and Jaylene recognizes him as an old high school classmate.

The movie jumps to Tommy, who is at the end of a long work week. Viewers see Tommy brandish a gun after drinking and taking drugs, implying that Tommy is hopeless and wants to commit suicide. However, a series of calls from Jaylene interrupts his plans. Jaylene explains to Tommy that Tulsa could be his daughter, and the three meet shortly later. Although reluctant, Tommy agrees to give Tulsa a home while doctors do DNA testing to see if Tommy is the father.

Tulsa and Tommy begin to influence each other, but Tulsa’s strong display of faith and insistence on going to church wears on Tommy. After Tulsa throws out all of Tommy’s alcohol, tensions rise. Tommy doesn’t approve of Tulsa barging in on his life, but she forces him to face the reality of what he believes about faith, relationships and his past.

TULSA is a faith-based drama inspired by true events about a hopeless addict, Tommy Colston (Scott Pryor), who reluctantly invites Tulsa (Livi Birch), Tommy’s long-lost 9-year-old daughter who believes in the Bible and God, into his home. Both characters have had troubled pasts. Tulsa grew up with an abusive foster parent after her mother died. Tommy served as a Marine and struggles with drug and alcohol addictions. However, one of the most significant differences between the two characters is Tulsa’s strong faith in God and His word. As their relationship grows, Tommy and Tulsa must face the reality of their beliefs about faith, love and their broken pasts.

TULSA is a heartwarming drama with a strong Christian worldview and some comedy to boot. Although the pacing sometimes wavers due to awkward shifts in tone, the emotional beats still feel impactful and are elevated by Josh Garrels’ music throughout the movie. TULSA has a strong Christian worldview and dominant themes of redemption, forgiveness and love in the face of tragedy. Due to depictions of alcohol and drug abuse, as well as an implied suicide of a pregnant woman, MOVIEGUIDE® advises caution for older children.