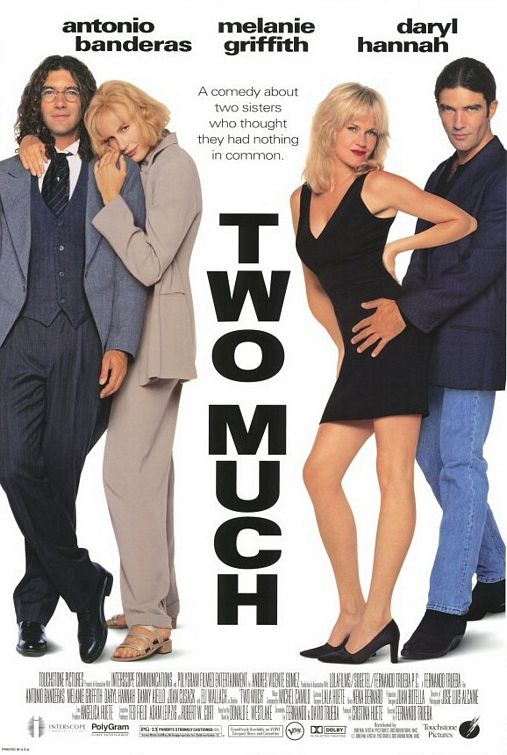 TWO MUCH is a slapstick tale of a career liar who suddenly finds himself so completely enmeshed in his tangled web of lies that he has to resort to drastic measures to try to extricate himself. Mediocre acting by the film's leads and a story revolving around two self-serving characters hinder the film from engaging the audience, but a few pleasant surprises make the film a pleasant diversion and even (in places) funny despite its pagan worldview, mild violence and sexual activities. Otherwise, it is TWO MUCH of a bad thing.

TWO MUCH is the slapstick tale of a career liar, Art Dodge (Antonio Banderas) who suddenly finds himself so completely enmeshed in his tangled web of lies that he has to resort to drastic measures to try to extricate himself without hurting the women who love him. While nearly engaged to Betty, he falls for her sister Liz and creates two identities in order to see if he can win Liz over. He has to do this all without getting himself hurt by the mobsters who are out to get him. Along the way, he falls in love, gets himself deep in trouble and somehow finds his way to pick up the paintbrush so he can come out of his own retirement as an artist.

Mediocre acting by Antonio Banderas, Melanie Griffith and Daryl Hanna and a story revolving around two unexciting and morally inept characters hinder the film from truly engaging the audience. The movie also has some very odd camera and editing techniques that indicate amateur filmmaking. However, treats along the way such as characters Gloria Fletcher, Eugene and Art’s father, and a few good slapstick moments with Banderas, make the film a pleasant diversion and even funny. Caution should be noted because the film does have some mild violence and sexual activity. In the final analysis, it is TWO MUCH of a bad thing.