"Nobility in a Sometimes Complicated Time of War" 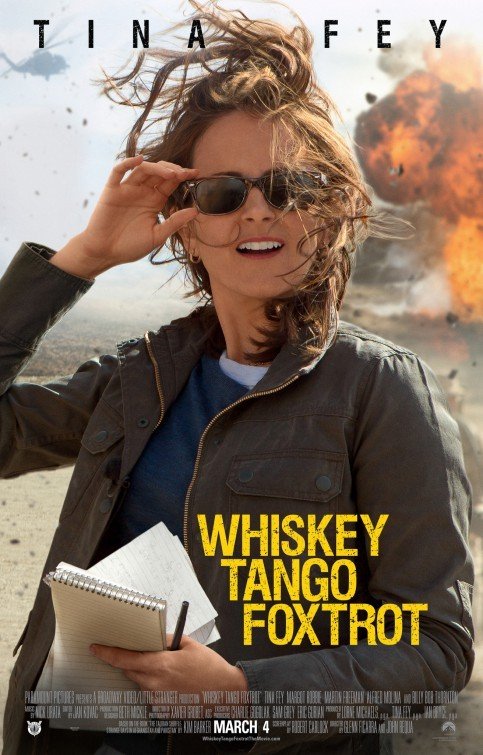 WHISKEY TANGO FOXTROT is a comical but serious movie starring Tina Fey. It’s based on the true story of Kim Barker, an American female journalist, and her adventures in Afghanistan during the Afghan war. Kim has hit middle age with no children and no marriage on the horizon. She’s a news writer for a major unnamed cable news network, but is bored out of her mind and depressed with her life. Kim decides to shake things up. She agrees to an assignment as a war correspondent embedded with American soldiers in Afghanistan. The rest of the movie shows her experiences there, including the party atmosphere among the journalists in their downtime.

(BB, PPP, C, RoRo, Ho, LLL, VVV, SS, N, AA, DD, MM) Strong moral worldview with very strong patriotic elements that show American soldiers in fighting the War on Terror are noble and honestly care about helping civilians in battle zones, despite their difficult situation, a redemptive scene of forgiveness, and an American soldier gives eloquent speech that the soldiers really are trying to defeat greater evil and help the poor people of Afghanistan, marred by some strong Romantic, immoral elements, plus a lesbian reporter tries to seduce the female protagonist, and it’s treated humorously; at least 176 obscenities (including many “f” words) and 15 profanities; strong and brief very strong violence includes a couple intense gunfights during war, a vehicle explodes, a bomb goes off, and the scene graphically and bloodily shows a soldier severely wounded and killed, and another soldier has half his leg blown off, a scene shows Taliban leaders inciting a crowd to violence as they shoot TVs and radios, and an off-screen explosion causes a soldier to have his lower legs blown off, and he’s later shown with prosthetic limbs; no depicted sex or intercourse, but strong sexual immorality overall includes a scene of implied fornication, it’s implied female protagonist lives with her long-time boyfriend, later she learns the boyfriend cheated on her, a lesbian journalist makes light passes at female protagonist, characters discuss their sexual exploits, a recurring Afghan character apparently watches pornography including bestiality, passionate kissing, and protagonist has a casual attitude toward sex, but it’s clearly not working out for her; upper male nudity, and woman is obviously naked under bed sheets, but nothing explicit is shown; alcohol use and lots of drunkenness, including by female protagonist, but she begins to realize her partying is taking its toll; smoking and implied hashish use while smoking a hookah; and, sexual harassment humorously attempted by an Afghan male official with ties to the Taliban, the horrible treatment of women by Muslim men is clearly depicted, and female lead tours a girls’ school that was destroyed by arson and she discusses that at length, and female reporter seeks forgiveness from a soldier who she comes to believe was wounded due to her getting him in trouble from an interview and his getting reassigned as a result.

WHISKEY TANGO FOXTROT is a comical as well as serious movie based on the true story of Kim Barker, an American female journalist, and her adventures in Afghanistan during the first four years of the Afghan war. WHISKEY TANGO FOXTROT is very entertaining and heartfelt, with a strong moral worldview and extremely strong patriotic elements honoring American soldiers and showing the evils of Islamist society. However, offsetting this positive content is strong Romantic, immoral elements, abundant foul language, and some alcohol abuse that’s, however, somewhat rebuked in the end.

Based on the memoir THE TALIBAN SHUFFLE: STRANGE DAYS IN AFGHANISTAN AND PAKISTAN by Kim Barker, the movie follows Tina Fey as a somewhat fictionalized Kim Baker. Kim has hit middle age with no children and no special romance in her life. She’s a news writer for a major unnamed cable news network (think CNN), but bored out of her mind and depressed with her life.

Kim’s boss assembles single staffers at the network to beg them to head to Kabul, Afghanistan, because the network wants to avoid sending married reporters and reporters who are parents. Kim jumps at the chance to shake up her life and see what she really is, and soon she’s landing in Kabul. There, Kim’s assigned an interpreter named Fahim (Christopher Abbott) and a bodyguard named Nick (Stephen Peacocke).

Kim is at first embedded amid a Marine base headed by General Hollanek (Billy Bob Thornton), who tolerates her but thinks she’s trying to showboat as a woman in the horribly anti-female society of Afghanistan. He fears her presence could result in an accidental tragedy by distracting the focus of his forces, as well as inspire violent reprisal from the local males and Taliban figures she encounters.

Kim also has to contend with Ali Massoud Saddiq (Alfred Molina), who’s running for election as the country’s attorney general and keeps making unwanted passes at Baker whenever she asks him for access to the Taliban leaders who’ve taken control of much of the nation. The final piece in the puzzle of her life in the war torn country is Scottish photojournalist Iain MacKelpie (Martin Freeman), who has an obvious crush on her even as she’s dealing with her disgruntled New York-based boyfriend Chris (Josh Charles).

Directors Glenn Ficarra and John Requa spin all these characters and plotlines perfectly. They bring to life the superb script by Robert Carlock (Tina Fey’s primary writing partner on the NBC sitcom 30 ROCK) with a precise mix of humor, drama and surprisingly effective action moments. Their efforts create a potent combination that makes for an insightful, compelling and nearly nonstop entertaining ride.

WHISKEY TANGO FOXTROT also offers a look at both the intriguing little details of daily life for an American in Afghanistan, and shocking glimpses of just how insanely hateful and backwards Islamic extremists like the Taliban are. Particularly effective is a riveting sequence where Kim has to don a full-length blue burqa (dubbed “the blue prison” by Fahim) and enters the heart of Kandahar, the most terrifying province in the country for women.

The true brilliance of WHISKEY lies in its ability to boldly shine a spotlight on the evil side of radical Islam while also finding numerous subtle ways to convey the deep concern that Fahim the interpreter has for Baker. Carlock’s script manages to do both while not once stooping to using heavy-handed speechifying. It also creates an unpredictability throughout that effectively conveys the feeling of what it’s like to never know when a bomb will hit or a bullet will come flying at you or those you care about.

For anyone wondering whether this Tina Fey movie remembers to be funny, rest assured that WHISKEY is shot through with a sharply ironic and pitch-black sense of humor. It’s an impressive piece of work, built around a vibrant performance that’s not afraid to show Kim as a flawed personality who drinks too much, isn’t shy around a hookah and shirks off the guilt of a one-night stand with arch sarcasm.

On a political level, the movie is refreshingly free of the usual Hollywood attitude attacking the military. While it does have a couple of moments conveying the frustration of soldiers or even the general about how long the war is dragging out, WHISKEY TANGO FOXTROT unfailingly shows both the general and his troops as good-hearted people who truly want to do good for others, an attitude that pays off strongly in the movie’s most harrowing and affecting sequence.

Morally, however, WHISKEY is a bit of a conundrum to consider. On the one hand, it has very frequent foul language throughout, so be forewarned. On the other hand, this is a realistic portrait of life in a dangerous, often frustrating situation.

The journalists who make a longterm living at being embedded in Afghanistan are shown to be a hard-drinking lot, with Kim shown having severe hangovers at least twice. She’s also shown smoking a hookah, implying that she’s getting high, in one of three party scenes that feature rampant drunkenness among the reporters. The reporters also talk about being promiscuous, and Kim eventually engages in an affair herself in an implied fornication scene. However, there’s mildly graphic talk about sex, and Kim has a very casual attitude towards romantic affairs for a long while. Eventually, however, Kim decides her lifestyle is a bit self-destructive, so she starts to repent.

Violence-wise, the movie only has a couple of quick battle scenes. However, one scene winds up with a tragically bloody ending that’s definitely squirm-inducing, albeit tastefully short.