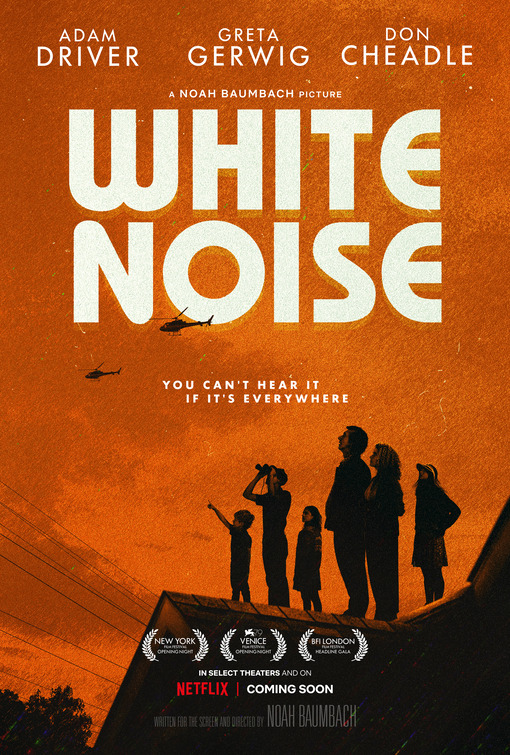 WHITE NOISE is a weird postmodern satire of America. Based on an acclaimed 1985 novel, it focuses on a mixed family in a Midwest suburb in 1984. Jack is a college professor who’s made a name by focusing on “Hitler Studies.” He and his fourth wife, Babette, have three children from other marriages and one of their own. The children constantly talk over everyone. Both parents have an inordinate fear of death. The plot, such as it is, involves a forced evacuation due to an explosion releasing a toxic chemical, and Jack’s efforts to find why Babette’s taking an unknown drug.

WHITE NOISE has some funny, endearing scenes. It ends on a note of hope and marital reconciliation. The positive ending is marred by brief foul language and a humanist, politically correct worldview with some Anti-American, anti-capitalist content. A nun at a Catholic hospital says the nuns there only pretend to believe in Heaven and God for the benefit of their patients. The movie does mock academia and mass media. Ultimately, the humanist, politically correct content overwhelms WHITE NOISE’s positive ending.

WHITE NOISE is a weird postmodern satire of America based on an acclaimed 1985 novel, which focuses on a mixed family in a Midwest suburb in 1984, led by a college professor who’s made a name for himself focusing on “Hitler Studies” at the local college, but who has an unnatural fear of death, as does his wife. The meandering plot of WHITE NOISE journeys to unexpected places as it gently satirizes American society, including obtuse college classes, consumerism, media saturation, public hysteria, the pervasive use of prescribed psychotropic drugs, environmental disaster, supermarkets, and the death of religion, but its positive ending of hope and marital reconciliation is marred by brief foul language and a humanist, politically correct worldview offering a critique of American society and American capitalism with some weird skeptical dialogue by an aging Catholic nun.

WHITE NOISE is based on the acclaimed postmodern novel by Don DeLillo. It opens with a lecture being given by a black professor, Murray Siskind, at a midwestern college, College-on- the-Hill, in a suburban town called Blacksmith. Murray shows his students images of car crashes in American movies and tells them that such car crashes are a celebration of “secular optimism,” innocence, carefree enjoyment, and fun, not pain and tragedy.

Cut to two lineups of cars arriving and leaving the campus roundabout as parents drop off their first-year children. A title on the screen mentions the first of the movie’s three chapter divisions, “1. Waves and Radiation.” On the second floor of a building, a white professor, Jack Gladney, watches the chaos below, and smiles. He ditches his professor’s robes and heads for home.  At home, Jack encounters a different kind of chaos. He and his fourth wife, Babette, have been married multiple times and have six children between them, two of which live with previous spouses. The youngest child, a quiet boy named Wilder, is their own child. The other three children are constantly talking over one another, to each other and to their parents. Meanwhile, Jack and Babette have an inordinate fear of death and debate one another on whether Jack is going to die first. Also, Jack has a nightmare about a mysterious man trying to kill him. Denise, Jack’s young teenage stepdaughter, tells Jack she’s concerned Babette has become a drug addict of some kind. She  found one of her mother’s empty prescription pill bottles, for a drug named Dylar. Denise worries that taking the Dylar has diminished Babette’s memory.

Denise tells Jack she can’t find any record of a drug called Dylar, and any pharmacy she calls never heard of the drug. Jack does some research, calling a pharmacy or two, and gets the same result.  Meanwhile, Jack’s professor friend, Murray, tells Jack he’s created a similar niche specialty like Jack’s “Hitler Studies,” called “Elvis Studies.” He asks Jack to come give a lecture on Hitler in Murray’s “Elvis Studies” class. Jack agrees, but the lecture turns into a funny double lecture as Jack talks about Hitler’s fixation on his mother while Murray talks about Elvis Presley’s fixation on his mother.

In the movie’s second part, titled “The Airborne Toxic Event,” a tanker truck carrying some kind of flammable liquid runs into a freight train full of boxcars with toxic chemicals. A spectacular train derailment occurs, followed by a big explosion that creates a large black cloud of toxic smoke drifting across the area. Everyone, especially Heinrich, Jack’s teenage son from his first marriage, is worried that the black cloud is going to reach Blacksmith, but Jack keeps assuring the family and himself that the toxic cloud is drifting away from the town. Sure enough, though, the next night, sirens blare, and a small firetruck warns residents to evacuate immediately.

The family packs their belongings into the family station wagon and head out of town toward an evacuation area. However, cars are backed up for miles. Meanwhile, in the sky, a black cloud with flashes of purple lightning drifts across the night sky in the distance. A series of comical misadventures occur, and so does a spectacular car crash when a truck tries to evade the traffic jam by driving along the road’s right shoulder. Also, at one of the evacuation areas, Jack learns he may have been exposed to the toxic chemical from the black cloud when he stepped out of the station wagon during the family’s travels to pump some gas from an abandoned rural gas station. An evacuation official tells Jack that his exposure to the toxic chemical may shorten his life by a little bit or a lot. No one can tell until he can get fully examined by medical professionals. Of course, this only increases Jack’s fear of death.

After nine days, the authorities deem it’s safe for people to return to Blacksmith. Everything seems to return to normal as the movie enters its third chapter, titled 3. “Dylarama.” Denise reminds Jack about Babette taking the mysterious drug, Dylar. Jack confronts Babette, and she reveals the secret behind her use of Dylar, which turns out to be an experimental treatment for the terror of death. The drug hasn’t really alleviated Babette’s own fear of death, and she admits that using the drug has caused her memory problems and a growing inability to distinguish between “words and things.” Babette also tells Jack she cheated on him to get into the experimental program and obtain the drug from one of the men dispensing it. Jack decides to take drastic action, a decision that results in a farcical ending.

WHITE NOISE has some funny, endearing scenes. Also, the movie ends on a note of hope and marital reconciliation between Jack and Babette. However, the positive ending is marred by brief foul language in a few previous scenes and by a humanist, politically correct worldview overall. Thus, the movie satirizes middle-class America and its capitalist, consumer society. However, WHITE NOISE also satirizes academia, public hysteria and the saturation of media in the lives of American families and children. Also, in one scene at a Catholic hospital run by German nuns, an aging nun tells Jack and Babette that the nuns only pretend to believe in Heaven and faith for the benefit of their patients. She also warns them that soon there won’t be any religious believers, so they should believe in each other instead. Ultimately, the humanist, politically correct elements in WHITE NOISE overwhelm its positive ending.