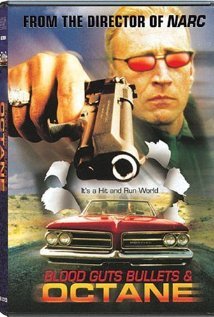 BLOOD, GUTS, BULLETS & OCTANE is the kind of movie teenage boys with too much time and energy on their hands would make if they could: lots of mean men with guns, raunchy language, a high body count, and two losers down on their luck. Its story focuses on two used-car salesman, a stolen red car, $250,000, and murder.

The story of a young family man just graduated from film school who rounds up his buddies and, with a mere $7,000, makes a movie that gets rave reviews at film festivals is a wonderful one. Regrettably, that’s not the movie that Joe Carnahan made.

Instead, BLOOD, GUTS, BULLETS & OCTANE is a movie about desperation in the sun-scorched town of Needles, Calif., where two used-car salesmen named Sid and Bob, played by Carnahan and producer Dan Leis, go through the paces of their goofy TV commercials. Sid and Bob’s luck is running dry. They have only 10 beat-up cars on their lot and a mean, well-connected competitor down the street. When Ray, played by James Salter, comes by to drop off additional vehicles, but only has one, Bob and Sid spout off language that would make a sailor blush. When they quiet down long enough, they realize this could be their big payday – Ray offers them $250,000 if they keep the red 1963 Pontiac LeMans on their lot for 48 hours, no questions asked, of course. Little do Sid and Bob know, however, that this car has a history of dead bodies scattered all the way from South America to Needles. Sid and Bob are hustlers, though, and when they smell a set-up, all mayhem ensues.

This is the kind of movie teenage boys with too much time and energy on their hands would make if they could: lots of mean men with guns, raunchy language, a high body count, and two losers down on their luck. Carnahan, who wrote the screenplay, uses flashbacks and cutaways to establish the danger. Although the actors perform well and there is some flash to this madness, there’s little substance.

At some film festivals, this movie has been compared to EL MARIACHI and CLERKS. EL MARIACHI had a story with something to say, but Carnahan does not. This movie is a testosterone-laden journey with little to show at the end. There’s a twist to the finish, at 87 minutes, it’s too much time, repetition and foul language to sit through to get there. Parents of teenage sons will probably rather that their teenagers go to something that will enrich their lives instead of inspire their baser instincts. Who knows? They may end up with a camera in their hands in a few years, and Lord knows the world doesn’t need another BLOOD, GUTS, BULLETS & OCTANE.