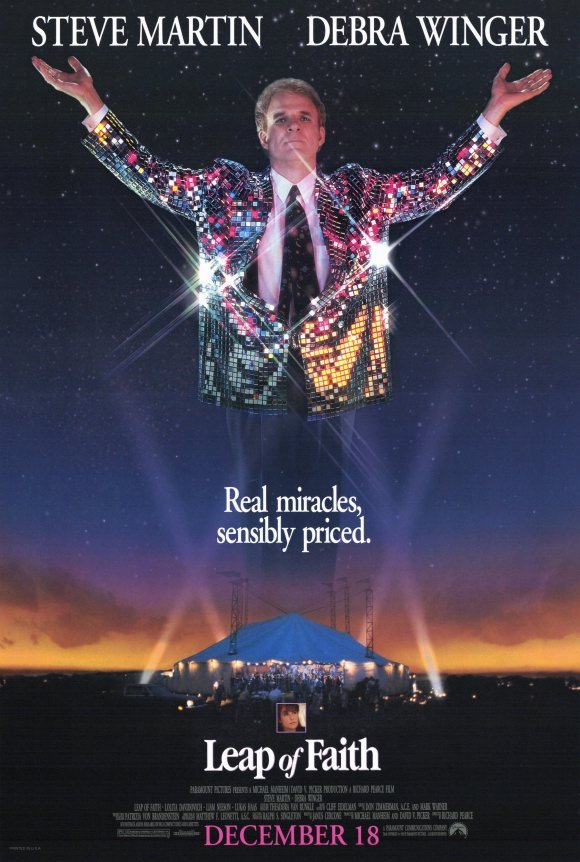 The film LEAP OF FAITH deals with a con-man evangelist, Jonas (Steve Martin), who uses a traveling tent revival to make money even as he uses his skills of observation and technology to manipulate the emotions of others. The movie is well crafted and contrasts the deceit and sham of Jonas with real miracles in the healing of a crippled boy and the end of a devastating drought. In fact, the film rebukes those who try to use or manipulate God, while it lifts up Jesus Christ as the Great Physician and sovereign Creator God.

(C, B, Ab, LL, S, A/D) A strong testimony to the sovereignty of God/Jesus Christ, marred by the portrait of a evangelist con-man and at least 20-25 crude, obscene words & a few profanities (hard to tell about some); implied sexual intercourse (one time); some alcohol abuse; but, no nudity & no violence.

The film LEAP OF FAITH deals with a con-man evangelist, Jonas (Steve Martin), who uses his skills of observation and technology to manipulate the emotions of others. His assistant, Jane, and his crew find out about audience members in order to deceive them. His adversary, Sheriff Braverman of Rustwater, Kansas, discovers that Jonas is a con and wants to get rid of him. However, the situation changes dramatically when real miracles takes place in the form of the healing of a crippled boy and a drought-ending rain.

The film is well crafted, and the acting is credible. Some Christians may be offended by the premise of a con man using preaching as a con game. LEAP OF FAITH shows how technology can be used to manipulate people’s belief and to profit the unscrupulous. However, it also shows how even those that deal in tricks cannot explain the true miracles of faith which point unequivocally to the sovereignty of God. In fact, the film rebukes those who try to use or manipulate God, while it lifts up Jesus Christ as the Great Physician and Creator God. At film’s end, a host of Monarch butterflies reminds us that Jesus creates new creatures even as Jane decides to become a new person. The Angels of Mercy Gospel Choir, directed by Edwin Hawkins, provides a strong musical backdrop for the movie. Overall, LEAP OF FAITH has a good message, marred only slightly by worldly language.