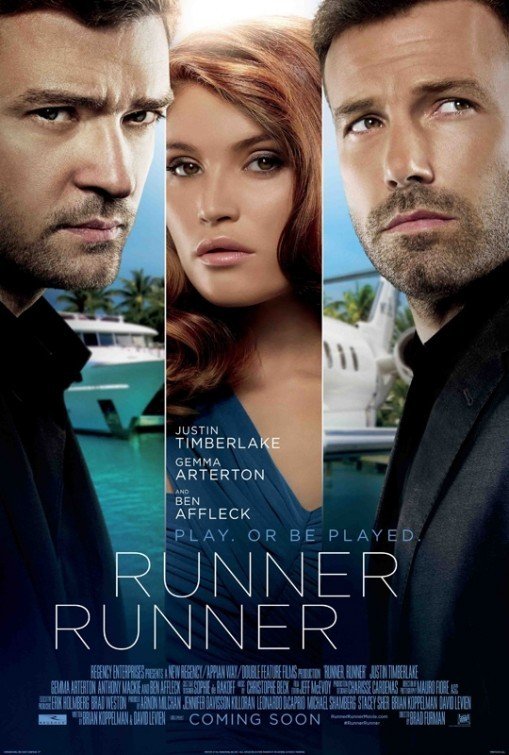 RUNNER RUNNER is about a college student who goes after the con man who cheated him out of his money. Richie needs money to finish his graduate program at Princeton. He gambles all his money in a poker game and loses it, but finds out he’s been cheated. So, he flies to Costa Rica to confront the man who scammed him, a gambling legend named Ivan Block. Block is a charming man who offers Richie a job. When Richie is approached by an FBI agent, he finds out Block is not the man he thought he was.

RUNNER RUNNER is a typical crime drama. It won’t be remembered, though it does have some entertaining parts and good acting. It also has a strong pagan worldview, glamorizing wealth and sex, though the ending has some moral messages: cheating is discouraged, and there’s talk about how “temptations” can lead people to their deaths. Even so, money is made into an idol, and there’s more than 120 obscenities along with some lewd content. So, MOVIEGUIDE® considers RUNNER RUNNER excessive, unacceptable viewing for media-wise moviegoers.

(PaPa, B, LLL, VV, SS, N, A, MMM) Strong pagan worldview where money is the idol, plus some moral elements and lessons, such as son helps father who has an addiction, cheating is discouraged, and there’s discussion about people being tempted by evil; 129 obscenities (including many “f” words) and five strong profanities, plus vomiting; strong violence includes multiple fighting scenes, man beaten up, two men thrown into lake with alligators leaving them a little bloody, man held over a ledge; strong sexual content includes adultery, threesome, prostitutes offered and implied, fornication; rear female nudity and girls in underwear; drinking; smoking; and, greed, lying, blackmail, gambling.

RUNNER RUNNER is about a young man, Richie, who risks all his money on one bet, in order to stay in school. Then, after losing his money, Richie finds out he’s been cheated, so he goes to find the man who stole it. RUNNER RUNNER isn’t a movie that will be remembered, though it has its entertaining moments (but with a strong pagan worldview overall).

Richie is a graduate student at Princeton. When the Dena finds out Richie has been betting, he chastises him. Despite that, Richie knows he still must get the money to finish college. So, he bets all his money in one poker game. After hours of playing, Richie loses it all, but realizes he’s been cheated. Flying down to Costa Rica, Richie goes to confront the man who stole his money, Ivan Block.

In order to keep this under wraps, Block hires Richie and promises him the world. Enticed, Richie takes on the job. Months go by where Richie is living large. The one thing he still desires is the COO of the company, Rebecca. Rebecca is charmed by Richie, and the two develop a connection.

FBI agent Shavers approaches Richie to help take down Block, who has cheated many people. At first, Richie loves the benefits Block has given him too much to want to take him down. Things get real, however, when Block’s own men start to come for Richie.

RUNNER RUNNER has your typical, predictable crime drama storyline. This one won’t be remembered particularly, though there were entertaining parts. All the actors do a good job, but none of the performances required deep portrayals.

RUNNER RUNNER has a strong pagan worldview glamorizing wealth and sex, though in the end, it shows how empty such things really are. Cheating is discouraged and there’s talk about how “temptations” can take over people and lead to their deaths. That said, the evil gangster is seen as a compelling character and even has a likable aspect. RUNNER RUNNER also has more than 120 obscenities and contains strong lewd content overall. So, MOVIEGUIDE® considers RUNNER RUNNER excessive, unacceptable viewing for media-wise moviegoers.