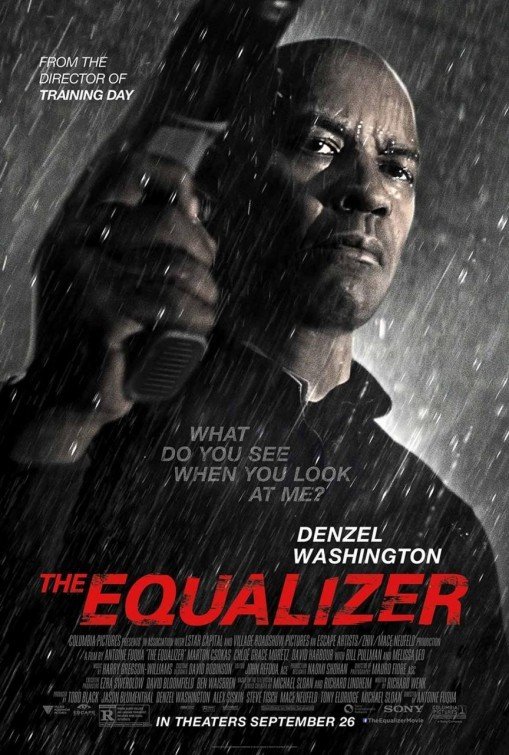 THE EQUALIZER is a well-made but violent thriller starring Denzel Washington as a friendly, helpful employee in a home improvement megastore. Robert has dinner every evening at a diner where Teri, a girl trapped in prostitution, asks him about the books he’s reading. After a customer beats Teri, she goes for a walk with Robert, but she’s taken by her Russian mafia pimp and beaten even more. Robert goes to offer $9,800 to the mobsters to set her free, but they refuse the offer. Robert kills everyone in the room with style, brutality and efficiency. To protect several other friends, Robert must pursue the Russian thugs and the corrupt officials they have in their pockets.

Denzel Washington does an amazing job in THE EQUALIZER looking peaceful and compassionate while engaging in some gory killings. It’s certainly biblical to love justice and to stop brutal injustice, but the hero in THE EQUALIZER goes too far. To his credit, he always urges the bad guys to walk away. THE EQUALIZER also contains lots of strong foul language. So, media-wise viewers will want to think twice before seeing THE EQUALIZER.

(B, C, Ab, AP, LLL, VVV, S, N, A, D, MM) Light biblical, redemptive worldview that, while the hero has a somewhat biblical concept of justice (opposing evil, risking his life to save others), he doesn’t overtly claim a Christian foundation for it, and he violates biblical admonitions against revenge and violence, plus a dark view of America as the authorities are on the payroll of mobsters; at least 70 obscenities and profanities; gruesome bloody violence including a girl with massive bruises from being beaten, another girl is strangled, a man beaten in the face many times, a man stabbed with a cork screw until it shows in his mouth, a man stabbed through the neck with hedge clippers, a man hung to death, a man locked in a car with exhaust fumes pumped in, men shot and stabbed; no actual sex shown, but two characters are sex slave prostitutes; upper male nudity with massive Satanic tattoos and obscured male nudity behind frosted shower glass; some alcohol use but no obvious drunkenness; brief smoking but no drugs; and, tattoos, revenge, police and political corruption, theft, arson, and extortion.

THE EQUALIZER is an action thriller starring Denzel Washington as a man who decides to take action against the Russian mob when the gangsters threaten a prostitute he’s trying to help leave her immoral lifestyle. THE EQUALIZER is very well made, but the hero’s violent reactions to the villains, who refuse to follow his warnings, go too far.

The movie opens with a quotation from Mark Twain:  “The two most important days of your life are the day you were born and the day you find out why.” This is followed by Robert (Denzel Washington) peacefully working at a home improvement megastore. He’s helping a young Hispanic man prepare for a test that will enable him to become a security guard. He has dinner every evening at a diner where he discusses great books with Teri, a girl across the room who wants to become a singer but is trapped in a life of prostitution.

The day after Teri is beaten by a customer, she turns off her phone and goes for a walk with Robert. She’s caught by her Russian mafia pimp and carted off. She winds up in intensive care in the hospital.

Robert goes to see Teri in the hospital. He then goes to offer $9,800 to her pimps to set her free, but they refuse the offer. Robert kills everyone in the room, with style, brutality and efficiency. Blood splatters on the walls and a Russian Orthodox image of Jesus, as he stabs one thug with a corkscrew he had been using. It comes up through his chin so you see the screw in his mouth.

Denzel Washington does an amazing job of looking like a peaceful compassionate man who, as the savior of his friends, engages in gory killings that make THE WILD BUNCH look tame. A garden tool gets run through one man’s neck. Another man hangs with Robert watching and enjoying his last few breaths. The sad thing is that the movie is so well made, you’re tempted to enjoy the man’s last few breaths as well.

The bad guys are extremely vulgar, brutal and heartless. The leader is covered in tattoos of Satan. The emotion the movie arouses is the same that’s aroused by images of children beheaded by the Islamic State. The audience can’t help but hate the injustice and cruelty and want the culprits killed. Robert’s justice is merciless, although he always gives them a chance to walk away.

While it’s biblical to love justice and hate injustice, the hero goes too far in THE EQUALIZER. Of course, it’s the role of the police to catch criminals and the courts to convict them, but in this movie, the police and the politicians are on the payroll of Russian mobsters.

Sadly, Americans have reason to wonder if their government is pursuing justice or attempting to cover up its own misbehavior. The sex slave trade is real, although recent evidence shows some of the numbers are exaggerated. However, there really are girls threatened, and even beaten, by pimps. Why isn’t this stopped?

In THE EQUALIZER, the hero does put his life on the line to save others. He also tells one young hooker, “Change your world,” when she tells him the world is tough for people like her. He has also taught her “Body, mind, spirit” for ways to focus her life. Later in the movie, she reiterates the lesson when he says, “Body, mind. . .” and she adds “Spirit.” The hero also admonishes coworkers against swearing, even in banter in the break room. Finally, it must be noted that he always says “I gave you a chance to walk away” to each major villain before he finally gets violent on them, and he tells one corrupt cop “do the right thing” repeatedly before the cop breaks down and says “I used to be good!” Eventually [SPOILERS], he convinces the cop to turn in a secret hard drive proving Russian mob bribes of countless government officials and congressmen. The cop also turns himself in for prosecution, but this all happens after he repeatedly threatens the cop.

All that said, the hero and the movie certainly goes too far in the violent methods employed against the villains. Jesus didn’t come to slice to bits every vulgar, violent criminal on earth. He came to set people free from the sinful nature that makes them vulgar, violent and criminal.

The day, you find out why you were born is the day you learn that Jesus Christ has a plan for your life. That plan won’t involve such brutal violence as you’re going to see in THE EQUALIZER. The movie’s violence makes the movie excessive. Also, though the hero rebukes obscenity, THE EQUALIZER has a lot of it.