"Prayer Can Bring Miracles from God" 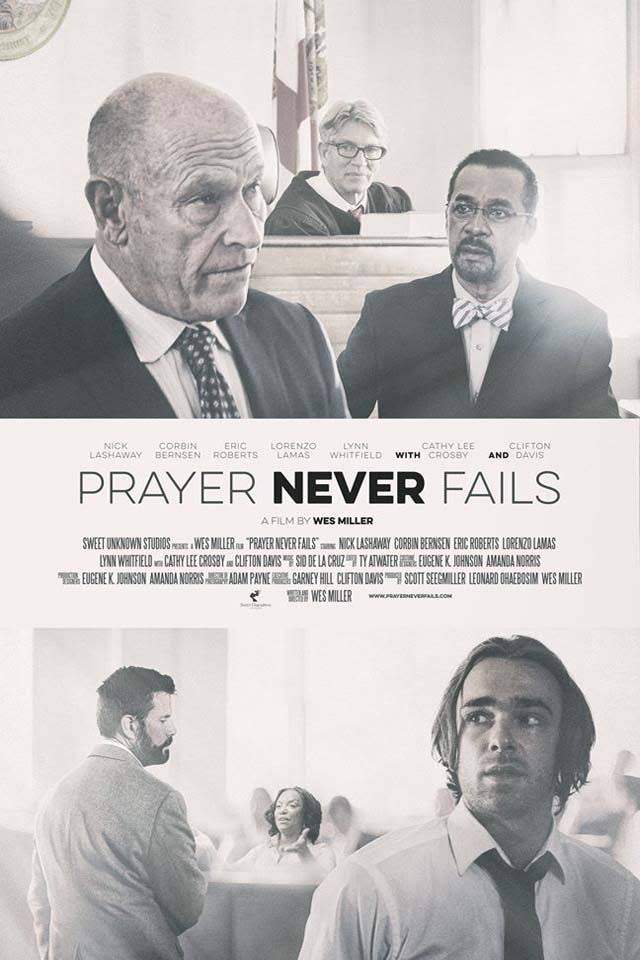 PRAYER NEVER FAILS is an underdog story about a young high school basketball coach. Aiden prays with his high school team. When he challenges the principal, who’s taking money from the team instead of buying much needed equipment, the principal fires him for praying with one hurting student. Aiden follows God’s calling and hires an agnostic lawyer to fight to get his job back. Both men battle with their faith, or lack thereof, and try to find the balance between fact and faith. As their case against the school grows, Aiden and his lawyer look to God for help and guidance. They eventually take the matter to the courtroom.

PRAYER NEVER FAILS is a little rough around the edges. It has a great message of just how powerful prayer and having God on your side can be, but it also deals with some tougher subject matters, like lying, gambling, physical abuse, a brief drug reference, and a referenced, but not shown transgender character. PRAYER NEVER FAILS is a good movie with a strong Christian message, but MOVIEGUIDE® advises caution for children.

(CCC, BBB, Ho, V, S, N, A, DD, MM) Very strong Christian, biblical worldview with many references to Bible verses, messages about prayer getting you through tough times and that having God on your side can help you conquer anything, coach prays over a student and basketball team, and redemption and healing in many different broken relationships, plus some references to homosexuality and “transgender” teacher; no foul language; violence includes adults yelling at other adults, man hitting wall with fists, implied physical abuse from father to son, physical fight between two men, threats made on a woman’s life, stories of a murder brought up in court; light sexual immorality with reference to transgender teacher, with nothing shown, and a question of homosexuality; brief upper male nudity in a locker room; brief use of alcohol with man taking a couple sips in front of his son; brief drug reference; and, strong miscellaneous immorality but rebuked, such as gambling, lying, criminal pasts, taking money from people without paying it back, blackmail, and many dysfunctional family portrayals.

PRAYER NEVER FAILS is an underdog story of a high school basketball coach who gets fired after praying over one of his players. He follows God’s calling and hires an agnostic lawyer to help him fight to get his job and his team back.

The story begins with a young high school basketball coach, Aiden Paul, and the love and dedication he has for the boys on his team. After playing some Christian rap music for them before practice one day, he leads his team boldly through an encouraging chant and prayer to get their hearts and minds centered in the right place. Afterwards, he kneels and prays with them again once practice is over. This is the routine Aiden has done since his first day of coaching these boys.

One day Aiden stumbles upon news that the principal has been using the basketball team’s funds in other places of the school, instead of buying much needed equipment and jerseys for the team. Furious, Aiden threatens to report the principal to the school board of directors. On that same day, the principal fires the coach for praying over one of his players who asked for help.

Now that Aiden is thrown into a whirlwind of unknowns, with no job, no family, and nowhere to turn, he looks to God for help and answers. That eventually leads him to a troubled lawyer who has a bad addiction to gambling and is in a large amount of debt with other clients. Not knowing about all this, Aiden decides to hire him.

Throughout the rest of the story, both men battle with their faith, or lack thereof, and try to find the balance between fact and faith. As their case against the school grows, Aiden once again looks to God for help and guidance. They take the matter to the courtroom, and watch as God does amazing miracles before their eyes.

PRAYER NEVER FAILS is a little rough around the edges. It dealt with some harsh realities of this world like lying, gambling and physical abuse, and there is sexual immorality with a reference to transgender teacher, with nothing shown.

Although God’s light still prevails in the end, many characters fight against His and against faith and prayer. The movie’s editing is very good, however, with nice scene transitions and solid cuts.

Even better, PRAYER NEVER FAILS has a great message of just how powerful prayer and having God on your side can be. The story also contains many redemptive aspects to it.

Of course, prayer is the backbone of the story. The movie really sheds some light on how godly prayer can make miracles happen when all hope seems lost. The protagonist is quick to turn to the Bible for answers and present all his struggles to God through prayer.

PRAYER NEVER FAILS is a good movie with a strong Christian message, but also deals with some tough subject matters. It is a good movie, but caution is advised for children.