"A Sibling’s Love Is Forever" 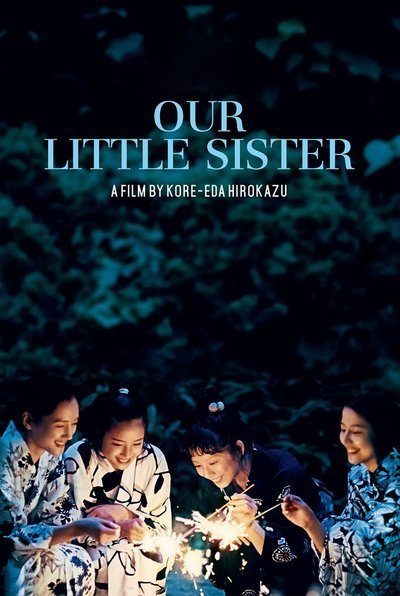 OUR LITTLE SISTER is a Japanese drama about the relationships among three sisters living together in their grandmother’s home in Kamakura. When their father left them 15 years ago for another woman, their mother abandoned the girls so they had to form a unique family. Sachi is the responsible older sister, Yoshino the pretty party girl, and Chika the quirky comical sister. When their absent father dies, they attend his funeral and meet their shy 13-year-old half-sister. They invite her to live with them and begin a new life with the new sister.

OUR LITTLE SISTER has beautiful shots of the Japanese countryside, making it a visual treat. The well-developed characters bring the movie to life. Each sister possesses unique qualities. The plot is well crafted. However, almost every scene is shot around a meal. This is sometimes stifling. The movie has a strong moral worldview where the three older sisters help care for their younger half-sister. However, it also contains some implied Buddhist worship, references to adultery and brief foul language. So, caution is advised for OUR LITTLE SISTER.

(BB, FR, Pa, C, L, V, S, AA, MM) Strong moral worldview, sisters show love and compassion for one another despite dysfunctional parents, and daughters honor their mother and father, although their parents left them to raise themselves, sisters make sacrifices by putting each other first and their desires second, plus sisters light a candle and pray every morning in silence, sister’s religion is never stated but it’s implied it may be Buddhism not Christianity, but there are Christ-like qualities of forgiveness and repentance portrayed; light language, one uses of the “s” word, light obscenities, plus younger sister gets sick from drinking, with implied vomiting and unpleasant sound effects; light violence, such as sisters argue and fight over clothes, and sisters shove each other in a nonthreatening way when upset; adultery implied but never shown, movie is based around a father who cheated on his wife and had another child with his mistress, and older sister dates a married man in secret, committing adultery too; light alcohol abuse, sister drinks wine and gets drunk in the middle of the day, sister drinks beer socially with different men, mother shares a glass of wine with daughters in their home; no smoking or drugs; and, greed, dysfunctional family and some bad role models.

OUR LITTLE SISTER is a Japanese drama about three sisters who invite their half-sister to move in with them.

Three sisters – Sachi, Yoshino and Chika – live together in a large house in the city of Kamakura. After their father left them 15 years ago for another woman, their mother became deeply depressed and unable to recover. She moved away, leaving Sachi in charge to raise her younger sisters. This forced Sachi to grow up fast. Over the years, the three sisters have created their own family, one without parents, learning to figure out life along the way.

When the sisters learn about their father’s death, they respectfully travel to the countryside to attend his funeral. Once there, they are introduced to Suzu, their 13-year-old half-sister. When Sachi realizes Suzu’s mother has died too, and she has nobody left to care for her, she invites her to live with her and her sisters. Suzu graciously accepts, thrilled to have a place to call home.

Suzu adjusts to a new life quickly where her youthful eyes are exposed to things like boys, drinking, cooking, painting her nails, and apple picking. Suzu learns how to embrace being a girl, a sister and part of a loving family environment. As the story progresses, the audience is exposed to the different coping mechanisms each sister has adopted because of their absent parents.

Sachi, the oldest sister, seems more like an overworked mother and feels a great responsibility to provide for her sisters. She never stops working and puts her desires last. She has a strained relationship with her mother whom she blames for leaving her as a child and forcing her to grow up so fast.

Yoshino has learned to focus on beauty to fill the void. She dyes her hair, paints her nails and goes out drinking with various men, often ending up in the bathroom from getting too drunk and in tears form another failed fling.

Chika, the comic relief, has embraced the edgier side of life. She wears wild, mismatched clothing, crazy hair styles, and is a free spirit at heart, seeking a more spiritual path for guidance. With these varying dynamics, it’s clear each sister seeks some sort of approval they never got from their parents. Sachi finds gratification through work, Yoshino through boys and Chika through shocking others.

When Suzu comes to live with the sisters, she forces them to rethink their actions, where each feels an obligation to be a strong role model for the parentless child. Yoshino stops pursuing men. Chika takes time away from her individual hippie ways and shows Suzu around the city. Finally, Sachi turns down an opportunity to live in America with a married man, realizing she has no right to fault her mother anymore because, despite all her accomplishments on paper, she’s now the other woman to a married man.

OUR LITTLE SISTER ends on an upbeat, positive note where each sister learns that their parents’ mistakes don’t define who they are. With the presence of Suzu in their home, they all have a strong moral desire to do the right thing, showing the power of love, family and how much children can hold us accountable for our actions.

OUR LITTLE SISTER is a movie rich in characters, story and cinematic elements. The movie defies everything Hollywood too often loves to promote – violence, sex and nudity – reminding viewers about the power of a good story. However, almost every scene is shot around a meal. This is sometimes stifling. The movie has a strong moral worldview where the three older sisters help care for their younger half-sister and learn to do the right thing. However, it also contains some implied Buddhist worship, references to adultery and brief foul language. So, caution is advised for older children.