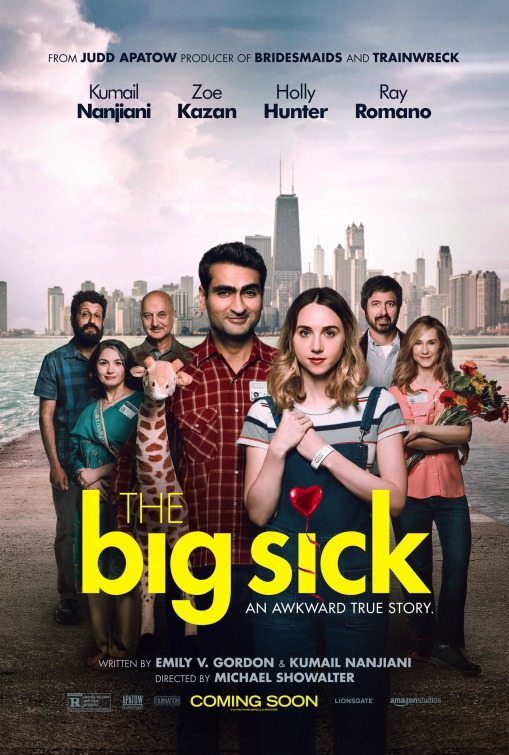 THE BIG SICK is a true life, slightly fictionalized romantic comedy about the taboo romance between an agnostic standup comic from Pakistan and a popular comedy writer born in America. Kumail scores a key performing slot in front of an important talent scout, but his concentration is thrown off by a loud cheer from a graduate student named Emily. He flirts with Emily from the stage, leading to a one-night stand that evolves into a serious relationship. Tension arises between them because of Kumail’s devout Muslim family, but he rushes to Emily’s side when she suffers a life-threatening illness.

THE BIG SICK has some moving emotional moments that add impressive depth to its story. Kumail Nanjiani convincingly plays himself, while Zoe Kazan brings a refreshing charm to her role as Emily. Ray Romano and Holly Hunter add professional gravitas to their roles as Emily’s parents. THE BIG SICK has a strong Romantic worldview, but it’s combined with some strong moral elements extolling marriage, family, forgiveness, and reconciliation. Sadly, THE BIG SICK contains frequent foul language; so, extreme caution is warranted.

(RoRo, FR, H, BB, C, LLL, S, A, M) Strong Romantic, somewhat antinomian worldview about the slightly fictionalized real-life mixed romance and marriage between an agnostic stand-up comedian with a devout Muslim family from Pakistan and an American family therapist turned comedy writer, with some strong elements extolling family, forgiveness and reconciliation and some positive content about marriage; at least 51 obscenities (including many “f” words, two strong profanities mentioning Jesus and six light profanities; no violence, but woman with infected lung has to be placed in a medically induced coma; a few jokes about sexual situations (none very graphic), unmarried couple has one-night stand that cuts away after they kiss in bed, couple is later shown necking on a couch, and older man expresses regret for committing adultery in a one-night stand, but seeks and gains forgiveness from his wife; no nudity; brief alcohol use includes light wine drinking in one scene; no smoking or drugs; and, agnostic male protagonist withholds information from his devout Muslim family about dating a Non-Muslim American and breaks up with the woman but then realizes he made a mistake.

THE BIG SICK is a romantic comedy that also manages to have strong dramatic moments through its portrayal of the real-life relationship of its now-married co-writers, star comic Kumail Nanjiani (who plays himself in his pre-stardom phase) and popular humor writer Emily V. Gordon (played by Zoe Kazan), as they deal with both a huge culture gap and her life-threatening illness.

Now a comedy star with frequent roles in TV and films including a co-starring role on HBO’s sitcom SILCON VALLEY, Nanjiani here hearkens back to his early days as a standup comic in Chicago before stardom. That real-life experience pays off throughout, with a realistic portrait of the backstage banter among comics struggling for stage time.

Kumail scores a key performing slot in front of an important talent scout, but his concentration is thrown off by a loud cheer from a graduate student named Emily. He flirts with Emily from the stage, leading to a one-night stand that evolves into a serious relationship.

However, Kumail hides this fact from his Pakistani Muslim immigrant family, who wonder why he doesn’t practice his faith as traditionally as his siblings. His mother also constantly has women “just drop by” at family dinners in hopes of leading him into an arranged marriage.

However, Kumail never takes the bait, simply collecting the photos these women give him in a cigar box but refusing to call them. He also pretends to pray when his family orders him to do so in their basement, because he’s really an agnostic.

Tensions arise when Kumail finally admits to his brother he’s dating a “white woman.” At about the same time, Emily figures out that he’s hiding her from his family.  He explains he’s fighting 1400 years of Islamic traditions and is afraid of being abandoned by them, but the strain causes them to break up.

However, when Emily lands in a hospital ICU with a massive, life-threatening lung infection, Kumail rushes to be at her side.  Within moments, a doctor informs him she needs to be put in a medically induced coma to survive. He also pressures him to claim he’s her husband and sign the necessary order.

As her out-of-state parents (played by Ray Romano and Holly Hunter) arrive to care for her, Kumail finds himself in yet another conflict since Emily’s mom knows he broke her daughter’s heart. However, Kumail finds empathy from her father, who has a secret of his own. Through it all, Kumail learns not only how hard relationships can be, but also the value of family and reconciliation.

THE BIG SICK has some moving emotional moments that add impressive depth to what could have been another standard entry in Hollywood’s endless stream of romantic comedies. Nanjiani and Gordon clearly put a lot of heart into their script, with director Michael Showalter (HELLO, MY NAME IS DORIS) striking a perfect balance between humor and sadness, adding to his string of character-driven comedies.

The movie is at its best in its positive depiction of family, its exploration of the struggles a long-term marriage can face, and of the importance of forgiveness and reconciliation in any relationship. It might seem easy for an actor to play himself, but Nanjiani does outstanding work and displays a brave willingness to share his most emotional moments, warts and all.

Zoe Kazan brings a refreshing charm to her role as Emily, and it’s a shame she has to be knocked out in a coma for much of the storyline. Hunter delivers her most dynamic and feisty performance in several years, while Romano builds on his past decade of strong dramatic performances since the end of EVERYBODY LOVES RAYMOND.

The story makes clear Kumail is agnostic and his family are portrayed as happy members of Islam, but THE BIG SICK doesn’t take sides one way or another. However, it does convey the rigid mindset of Islam without relying on stereotypes and without inserting any rally strong attacks on the faith of Kumail’s parents.

The movie’s major drawback is its frequent foul language, including many “f” words, and its initial embracing of implied casual sex and pre-marital relationships. Otherwise, THE BIG SICK is a solid comedy with some positive values extolling family and a strong mix of humor and poignant drama. MOVIEGUIDE® ultimately advises extreme caution.