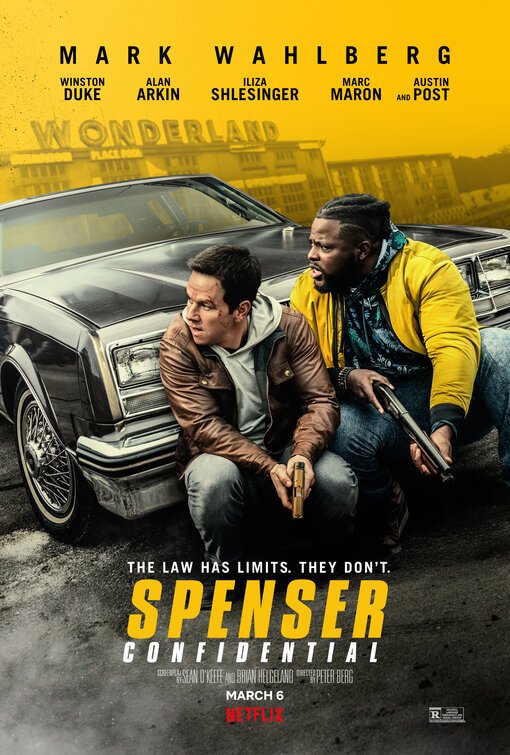 SPENSER CONFIDENTIAL takes place in Boston. It stars Mark Wahlberg as a former Boston cop and newly released convict named Spenser. Although he aspires to leave town, Spenser decides to stay in Boston to solve the murder of a police officer who’s been wrongfully framed for murdering a corrupt cop, who was killed by a drug gang. In doing so, Spenser finds help through his black roommate Hawk, an aspiring boxer. The two embark on an action-packed adventure and mystery, but little do they know what they are about to uncover.

Based loosely on a popular series of nearly 50 novels, SPENSER CONFIDENTIAL has some exciting scenes that never fail to keep viewers engaged. However, the plot is sometimes predictable, and the movie uses an abundant, excessive amount of strong obscenities. Also, the movie has lots of strong, often intense action violence and depicted fornication in one scene. Nonetheless, SPENSER CONFIDENTIAL has a light moral worldview that promotes friendship and justice while battling corruption, but the movie’s positive elements are overshadowed by the objectionable content, especially the high number of obscenities.

(B, LLL, VV, SS, N, AA, DD, M):
Dominant Worldview and Other Worldview Content/Elements:
Light moral worldview promotes friendship, battles police and city political corruption, and provides justice for the innocent convicted guilty, but otherwise the movie exhibits great amounts of violence and uses fighting as a solution to problems
Foul Language:
At least 159 obscenities (including 95 “f” words, 36 “s” words, and some “a” words, “h” words and “d” words) and 11 profanities (including JC, GD and OMG)
Violence:
Strong, often intense, but not graphic or extremely bloody, action violence includes a couple practice boxing fights, other fistfights, a fight where a bookshelf falls on an inmate, a man is kicked in the ribs, a makeshift knife is shown sticking out of a man’s back, a woman throws a TV and clothes off a balcony towards another man in a flashback, a bloody car crash scene, an execution style killing implying a man’s head is cut off by a machete, a dead body shown in a driver’s seat with a bloody head wound, a man is beaten up in a bathroom by five men (he fights them as well when they attack him), a dog attacks a character, a dead cat is shown having been nailed to a door, and the owner’s body is shown in a trunk, a woman’s face bleeds due to domestic violence, fight scene takes place at a restaurant, and machetes are used to fight, a car breaks through a restaurant’s large front glass window, man holds another man’s head in water so he can’t breathe, man throws a hammer into a car windshield causing the car to swerve off the road, two characters plow into a group of villains with a semi and proceed to shoot at them, and a man is slightly cut in the abdomen with a machete
Sex:
Depicted fornication in a bathroom with clothes on
Nudity:
Upper male nudity depicted
Alcohol Use:
Adults drink around a bar, drunkenness depicted once
Smoking and/or Drug Use and Abuse:
Narcotics are shown and discussed, but not promoted; and,
Miscellaneous Immorality:
Two characters steal a van, a character manipulates a DMV employee at the DMV to give up some information, and a character tampers with evidence at a crime scene.

One of the most popular modern series in detective fiction has been the Spenser novels written by the late Robert B. Parker. In the books, Spenser (his first name is unknown) is a former state policeman, who worked with a county district attorney but who now works as a private detective in Boston solving crimes that often but not always involve organized crime elements. Since the fourth of Parker’s 40 Spenser novels, Spenser often works with a large black man named Hawk, a gun for hire who does mysterious overseas jobs after being in the French Foreign Legion and working for a gangster. Since Parker’s death in 2010, the series has been written by Ace Atkins.

There have been a couple incarnations of the Spenser series on television, starting with the one called SPENSER FOR HIRE starring Robert Ulrich of the 1980s VEGAS series as Spenser and Avery Brooks of DEEP SPACE NINE as Hawk. A series of A&E television movies starred two-time MOVIEGUIDE® emcee Joe Mantegna of SEACHING FOR BOBBY FISHER, CARS 2 and the long-running CBS series CRIMINAL MINDS.

In the books, Spenser and Hawk are tough masculine man with their own separate personal moral codes. They both keep their word and will help other people, especially the truly innocent and needy, but Hawk has no qualms about hurting other people for money in the jobs he takes when he’s not with Spenser. Like other fictional, hardboiled private detectives, Spenser likes to make sarcastic wisecracks, but he’s also very well-read and just as apt to cite Shakespeare and especially poetry. For an obvious reason, unlike the novels, the TV incarnations of Hawk don’t have Hawk talk like a combination of a slave character out of GONE WITH THE WIND and a black jazz musician from the 1960s. Hawk’s character on TV speaks more like Spenser does in the books, but in shorter sentences and without the classic literary references.

Netflix is now streaming a new, but almost totally different incarnation of Spenser and Hawk in a movie called SPENSER CONFIDENTIAL, starring Mark Wahlberg as Spenser and Winston Duke as Hawk. It’s based on the second Spenser novel by Ace Atkins, titled WONDERLAND.

In SPENSER CONFIDENTIAL, Spenser is a former Boston cop and newly released convict who’s determined to solve the murder of two Boston police officers that involves police corruption and laundering drug money through an old gambling and racetrack facility being rebuilt. Based loosely on the Spenser novels, SPENSER CONFIDENTIAL is entertaining and action-packed, with a fun cast and a light moral worldview, but it contains abundant, excessive strong foul language, intense violence and depicted fornication in one scene. This SPENSER is UNACCEPTABLE.

The movie opens as Spenser, played by Mark Wahlberg, a former Boston police officer about to end his five-year prison sentence. Spenser was sentenced for assaulting another detective, Captain Boyland, because Boylan was moving too slowly to solve the gangland murder of a woman. Freed from prison, Spenser plans to complete a truck driving course, leave Boston and move to Arizona. While he’s finishing the course, he decides to live with his former boxing coach, an elderly man named Henry, played by the great Alan Arkin. Much to Spenser’s chagrin, Henry has a roommate living in Spenser’s old room, a young large heavyweight boxer named Hawk, played by Winston Duke, who played the leader of the mountain tribe in Marvel’s BLACK PANTHER movie. Hawk has even become friends with Spenser’s beloved dog, Pearl, a beagle (this, it should be noted, is heresy, because in the Spenser books, Pearl is a menacing-looking but friendly German Shorthaired Pointer).

On the night of Spenser’s release from prison, Captain Boylan is murdered by a gang of hooded thugs using machetes. It’s implied, but not shown, that they cut off Boylan’s head. The next morning, the wife of another Boston police detective, Terrence Graham, finds her husband shot dead in the family’s SUV, a gunshot to the head. That morning, the police search the family’s home, where they find some money and drugs hidden in a closet. They decide Graham killed Boylan, then took his own life because they were both selling drugs. Graham’s wife doesn’t believe this story at all and neither does Spenser.

Spenser decides to take matters into his own hands and investigate the case to bring justice to the Graham family. Spenser tracks down Graham’s partner in the police force to question him about his whereabouts on the night of the murder. Graham’s partner tells Spenser that Graham was at a sports bar, and not at the school bus yard where Captain Boylan was murdered. Following this discovery, Spenser analyzes surveillance footage from that night that reveals the color and type of vehicle that Graham drove the last time he was seen.

Spenser recognizes the car and owner and tracks down the location of the car, but decides that he can’t do everything alone. Spenser teams up with his roommate Hawk and his ex-girlfriend, Cissy, to uncover the secrets of the corrupt police force, the murders, the real drug ring, and a scheme to launder drug money by rebuilding an old racetrack into a casino facility.

Despite some predictability, SPENSER CONFIDENTIAL is entertaining and has many thrilling scenes. Also, the movie has a fun cast including Mark Wahlberg, Iliza Shlesinger, Winston Duke, and even an appearance from rapper Post Malone. They hit their characters to the letter. The movie keeps viewers interested as there is a mystery behind the movie’s intense action-packed scenes. Viewers will be invested to the end as the movie flows well and excludes unnecessary plotlines.

That said, this is not your father’s Spenser. Spenser never was a convict, and Hawk was already a former boxer and a gun for hire when he starts appearing in the novels. Hawk helps Spenser because the two became friends years ago when they competed in the boxing ring during their short boxing careers. Their recollections of their bout together is a funny thing, because Spenser thinks he won the bout Hawk thinks he won. That aside, there’s no hint of the mysterious, laconic Hawk in SPENSER CONFIDENTIAL, and neither is there any hint of the sophistication that Spenser’s character reflects in the novels. The only Spenser-like behavior in this television movie is the clever solution that Spenser and Hawk come up with when the corrupt police detectives and the evil drug gang members kidnap Henry and hold him hostage at the old racetrack that’s being rebuilt.

SPENSER CONFIDENTIAL has a light moral worldview that promotes friendship, battles corruption and provides justice for the innocent. However, it contains almost constant strong foul language, lots of strong, often intense action violence, and depicted fornication in one scene. The number of obscenities in this movie are way beyond the number of obscenities you’ll find in most if not all of the Spenser novels, especially the ones by Robert B. Parker. All in all, therefore, MOVIEGUIDE® rates SPENSER CONFIDENTIAL as excessive and unacceptable. For a much better, cooler incarnation of the Spenser novels, see the episodes of SPENSER FOR HIRE with the late Robert Ulrich and Avery Brooks.