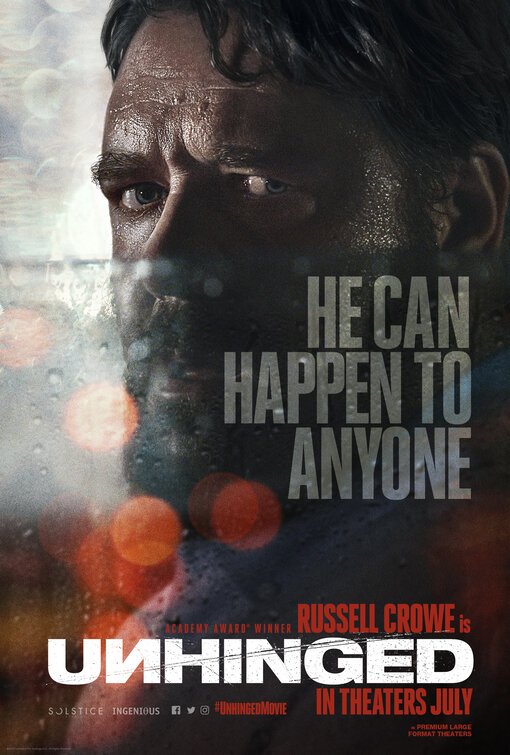 UNHINGED is an intense thriller about a divorced single mother who’s violently harassed by an angry man in a truck who threatens to kill her family. Rachel is a divorced hairdresser with a teenage son. Her brother and his girlfriend live with them. Rachel is late getting her son to school and meeting her last client. She gets into a road rage incident with an angry man driving a truck, who killed a woman just last night. While she’s stopped at a gas station, the man switches cell phones with her and threatens her family unless she apologizes. She tries, but he doesn’t accept her apology. Rachel’s nightmare has just begun.

UNHINGED is a suspenseful B thriller. The actions of the road rage man are seen against the backdrop of an increasingly violent American society, a sign of the disintegration of modern civilization. As the angry man, Russel Crowe’s performance here may remind people of his performance as the computerized killer in 1995’s VIRTUOSITY. UNHINGED contains extreme violence and lots of strong foul language, including many “f” words and several strong profanities.

(B, LLL, VVV, S, DD, M):
Dominant Worldview and Other Worldview Content/Elements:
Light moral worldview
Foul Language:
33 obscenities (mostly “f” words), three GD profanities, 11 light profanities, and woman gets sick off the side of the road at one point
Violence:
Some very strong and strong violence includes man busts down a house door and apparently bludgeons a woman and then sets fire to the house, man driving truck chases down woman in another vehicle and rams her car after a road rage incident, man slugs another man at a diner and slams his head down on the table before stabbing him in the neck, man deliberately rams his truck into a pedestrian, car chases include other vehicles crashing, man shoves woman onto another man while the man is holding a knife out to protect himself, man then binds other man and sets him on fire, man threatens woman and her family, woman and son try to fight off man, character stabbed in eye with scissors, newsreel footage of violence in the streets
Sex:
No depicted sex, but divorced heroine’s brother just moved in with her with his girlfriend
Nudity:
No nudity
Alcohol Use:
No alcohol
Smoking and/or Drug Use and Abuse:
No smoking, but villain pops pills; and,
Miscellaneous Immorality:
Road rage.

UNHINGED is an intense thriller about a divorced single mother who’s violently harassed by an angry man in a truck who threatens to kill her family. UNHINGED is a wild ride, but it has extreme violence and lots of strong foul language.

The movie opens at night with the man using a sledgehammer to bust down his own door and bludgeon his wife to death, then setting fire to the house. Only the woman’s screams are heard. The house explodes while the man drives away in his truck.

The next day, a divorced hairdresser named Rachel is running late for an appointment to cut an important client’s hair. She also has to drive her son, Kyle, to school first. However, whether she takes the freeway or the city streets, she keeps running into a traffic jam. At this point, the man in the truck appears. Rachel is stuck at a light behind him, but, when the light turns green, the man just sits there in his truck. Rachel honks her horn twice, then drives around him.

The man shows up next to her at another light. He angrily takes her to task for not giving him a “courtesy tap” on her horn. Rachel tries to tell him she’s having a bad day, but this just angers the man even more. He promises to show her what having a bad day really means.

The man starts chasing Rachel’s vehicle, and she keeps trying to get away from him. Meanwhile, her client calls her to tell her to forget it. Rachel is finally able to escape the man in the truck and drop her son off at school. She then calls her divorce lawyer to meet her at a local diner. He agrees.

However, while she’s stopped for gas, the man in the truck shows up again, waiting for her to finish paying inside. A young man agrees to walk her back to her car. He tries to confront the man for her, but the man runs the young man down and an even more dangerous chase ensues.

During the chase, Rachel learns that the man snuck insider her car and switched cell phones on her. Now, he has all her personal information. He calls her and threatens her again. She gets away again, but the man shows up at the diner and pretends to her lawyer that he’s a friend of Rachel’s. While sitting with the lawyer, he calls Rachel again, then proceeds to smash her lawyer’s face, slam his head on the table and then stab him in the back of the neck. He then threatens to come after Rachel’s family, including her son, her ex-husband, her brother and his girlfriend, and her invalid mother living at a nursing home. He orders her to pick his next victim. She picks her client, but then alerts the police while she drives furiously back to her son’s school to rescue him.

Rachel’s nightmare has only just begun.

UNHINGED is a suspenseful B thriller. The actions of the road rage man are seen against the backdrop of an increasingly violent American society, a sign of the disintegration of modern civilization. As the angry man, Russel Crowe’s performance here may remind people of his performance as the computerized killer in 1995’s VIRTUOSITY. Thus, UNHINGED seems like a step backwards for this Oscar-winning actor.