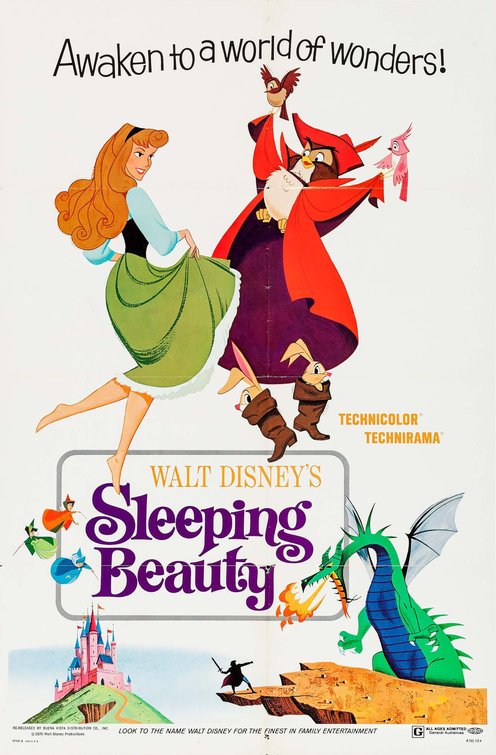 SLEEPING BEAUTY is Walt Disney’s classic 1959 animated fairytale. It follows a princess named Aurora who’s cursed by an evil fairy named Maleficent. Upon Aurora’s 16th birthday, she will prick her finger on the spindle of a spinning wheel and die. However, thanks to a good fairy named Meriwether, Princess Aurora won’t die but will fall into a deep sleep until true love’s kiss awakens her. Now, it’s up to the good fairies to keep Aurora out of harm’s way. Will they succeed in protecting the young royal?

SLEEPING BEAUTY is grand animation. The movie’s colors are vibrant, and the songs are whimsical and catchy. The movie is thoroughly entertaining, but some parts may be too scary for younger children. Best of all, SLEEPING BEAUTY has a strong, allegorical Christian, moral worldview mixed with strong Romantic elements. It includes biblical references to the New Testament, including references to the wise men and to the Armor of God in Chapter 6 of Paul’s letter to the Ephesians. MOVIEGUIDE® advises caution for younger children for animated violence and some scary images in SLEEPING BEAUTY.

(CCC, BBB, O, V, AA, M):
Dominant Worldview and Other Worldview Content/Elements:
Very strong allegorical Christian, moral worldview with mentions of true love, several elements of Christian and biblical imagery, characters take care of one another and adoption is extolled as fairies taken in a child who isn’t their own, good conquers evil, the sequence of the three fairies bestowing gifts is reminiscent of the wise men who visited Jesus at the time of his birth, and a prince fights evil with the sword of truth and the shield of faith, a direct refence to the amor Armor of God found in Ephesians 6, plus veery strong anti-biblical Romantic elements and some magic where the villain curses a child to die on her 16th birthday but a fairy counters the curse with her magic, three fairies use their wands to bake a cake and create a dress for a teenage girl turning 16, and villain transforms her body magically
Foul Language:
No foul language
Violence:
Animated violence includes sword use, a scary dragon who breathes fire, and girl pricks her finger and falls into a magical sleep;
Sex:
No sex but a couple kisses
Nudity:
No nudity
Alcohol Use:
Two kings get a bit tipsy while celebrating and court jester gets drunk and passes out under a table
Smoking and/or Drug Use and Abuse:
No smoking or drugs; and,
Miscellaneous Immorality:
Nothing else objectionable.

Walt Disney’s classic 1959 animated fairytale SLEEPING BEAUTY follows Princess Aurora and her three fairy godmothers who seek to protect her until her 16th birthday when she’s fated to prick her finger on a spindle of a spinning wheel. SLEEPING BEAUTY has a dominant Christian and biblical worldview mixed with very strong Romantic elements. For some animated violence, MOVIEGUIDE® advises caution for younger audiences.

Set in the 14th century, SLEEPING BEAUTY begins in a kingdom ruled by King Stephan and his queen, who’ve just had a baby girl named princess Aurora. During the public announcement of her birth, three fairies named Flora, Fauna and Meriwether come to bestow gifts for Aurora until they’re rudely interrupted by the Mistress of Evil, Maleficent. Maleficent is indignant with King Stephan because she wasn’t invited. So, she curses Aurora. On the eve of her 16th birthday, Aurora will prick her finger on the spindle of a spinning wheel and die.

However, Meriwether still has her gift to give. Instead of death for Aurora, after she pricks her finger on her 16th birthday, she will fall into a deep sleep where she can only be woken with true love’s kiss. Afterwards, the three fairies take Aurora into the forest for safe keeping and rename her Briar Rose. All the while, Maleficent and her evil goons look for her, but to no avail.

Flash forward almost 16 years. Briar Rose goes out to pick berries one day while the fairies prepare a celebration for her birthday. While out, Briar Rose meets a handsome prince named Philip, but he doesn’t tell her he’s a prince. In the meantime, the fairies pull out their magic wands after hiding them away for almost 16 years and fashion a dress for Briar Rose and a cake. However, they forget that the chimney is open, and Maleficent’s sidekick, a black crow, learns about Briar Rose’s whereabouts.

Will Maleficent get her way? Will Prince Phillip come to the rescue?

SLEEPING BEAUTY is a grand animation achievement from 1959. It’s thoroughly entertaining, though some parts may be too scary for younger children. The movie’s colors are vibrant, and the songs are whimsical and catchy. Some of the music is based on Tchaikovsky’s ballet SLEEPING BEAUTY.

Another praiseworthy element of SLEEPING BEAUTY is the movie’s Christian, biblical imagery. For instance, it’s clear that there’s a divide between good and evil, with Maleficent representing evil. Also, the sequence of the three fairies bestowing gifts is reminiscent of the wise men who visited Jesus at the time of his birth. Finally, at one point, Prince Philip fights evil with the sword of truth and the shield of faith, which is a direct reference to the Armor of God found in Ephesians Chapter 6. Thus, SLEEPING BEAUTY has a strong, allegorical Christian, moral worldview.