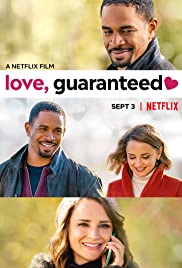 LOVE, GUARANTEED focuses on Susan, a female lawyer who takes many cases for free but can’t pay her bills. She takes on a high profile case from Nick, who wants to sue an online dating company called Love, Guaranteed after going on 1,000 dates and not finding love. A lonely workaholic, Susan thinks Nick is in the case for the money, but takes the case anyway because Nick’s a paying customer. However, Susan and Nick begin to hit it off as more than lawyer and client. The budding romance could hurt Nick’s case.

LOVE, GUARANTEED plays like a Hallmark romance movie, but there are few laughs. Also, some of the acting could be better. The movie has a strong Romantic worldview stressing dating and emotional relationships. The movie contains some light, false New Age theology in a few scenes, but it also extols some strong moral values such as donating your time to help others, helping the helpless, family, and honesty. MOVIEGUIDE® advises caution for older children, because of the Romantic worldview in LOVE, GUARANTEED, brief foul language and references to being drunk.

(RoRo, BB, FR, Pa, L, V, N, AA, M):
Dominant Worldview and Other Worldview Content/Elements:
Strong Romantic worldview revolves around a dating app and the main characters eventually fall in love with each other, mixed with some strong moral elements where both lead characters donate their time to help others as, one character learns that love is better than money, one character is known best for his honesty, and family is extolled, plus light, false, shallow New Age, pagan theology about going on a journey to find yourself and help solve the world’s problems, and a comment about Buddha that seems to fit in with that New Age context
Foul Language:
Three obscenities, one profanity, and one light name calling instance
Violence:
Co-workers throw a few office supplies like pens at one another to wake each other up
Sex:
No sexual immorality or sex scenes, but there’s kissing between dating couple, and a man kisses woman on her forehead
Nudity:
Upper male nudity shown in a photo on a dating website
Alcohol Use:
Photo of a drunk person shown, man appears drunk at restaurant and it’s not rebuked, two different comments about being drunk, wine and beer seen with dinner and drank socially
Smoking and/or Drug Use and Abuse:
No smoking or drugs; and,
Miscellaneous Immorality:
Lying, cheating.

LOVE, GUARANTEED is a romantic comedy streaming on Netflix about a female lawyer who takes on a case where a man wants to sue an online dating company for not finding love, because the company guarantees all its clients will find love. Sadly, LOVE, GUARANTEED offers few laughs, and its positive moral elements are marred by a Non-Christian view of romance, brief foul language and references to being drunk.

The movie opens with Susan arguing a case in court. Susan is a civil litigator and loves work pro-bono. However, the pro-bono work is hurting Susan’s business, and she can’t pay the bills for her firm. The problems at Susan’s office also carry home. Susan lives next to her sister and her growing family and is very lonely eating take out every day of the week by herself.

The next morning, Susan stops at a coffee cart while on the phone talking work. She doesn’t even realize she’s cutting off a man in line behind her. The man says something, and Susan apologizes and walks away. However, the two of them just so happen to be walking the same way, so he catches up with Susan to chat.

The man introduces himself as Nick. When Susan arrives at her office, and Nick waits to also enter, she realizes she had just been rude to her 9 a.m. appointment. Susan welcomes Nick inside and asks him about his potential case. Nick informs her he’s on the dating app Love, Guaranteed, and that after 968 dates he still hasn’t found love, even though it was guaranteed.

At first, Susan thinks this is comical and asks how he’s been on that many dates. Nick tells her breakfast, lunch and dinner of course. However, as Nick continues to tell Susan about his dating life, he points out that the fine print in the terms and conditions says the company says love is guaranteed in 1,000 dates. Nick tells Susan he’s almost to that number and will pass it shortly. Susan thinks Nick wants the lawsuit for the money, but she agrees to look over the case because he’s willing to pay her.

After doing some research, Susan takes the case. Susan’s associates at her firm believe she needs to experience dating on the Love, Guaranteed app to better understand the case. Susan goes on a few dates and experiences the clichés of online dating. At the same time, she also starts to vet Nick’s past dates to see if he’s really a gentleman truly looking for love.

When Nick tells Susan he has his 1,000 date a few weeks later, Susan decides she will go to the restaurant to spy on him. She notices Nick’s date is going horribly. Then, Susan is called out at the restaurant from one of her past dates, so Nick realizes she’s there. The two of them end up having dinner together and hitting it off, as more than lawyer and client.

However, this budding relationship could hurt Nick’s chances at winning his lawsuit.

LOVE, GUARANTEED is a romantic comedy that plays exactly like a Hallmark romance movie. Sadly, there are few laughs in this movie, so viewers most likely won’t find much comedy. Best known for her role in the 1999 romantic comedy SHE’S ALL THAT, Rachael Leigh Cook plays Susan, but doesn’t live up to her rom-com past. Her co-star Damon Wayans, Jr., however, outshines her here.

LOVE, GUARANTEED has a strong Romantic worldview where the story is focused on dating and finding love without God. The movie contains some light, false New Age theology in a few scenes, but it also extols some moral values such as donating your time to help others, helping the helpless, family, and honesty. For example, both main characters do much of their work on a volunteer basis. MOVIEGUIDE® advises caution for older children, however, because of the Romantic worldview in LOVE, GUARANTEED, brief foul language and references to being drunk.