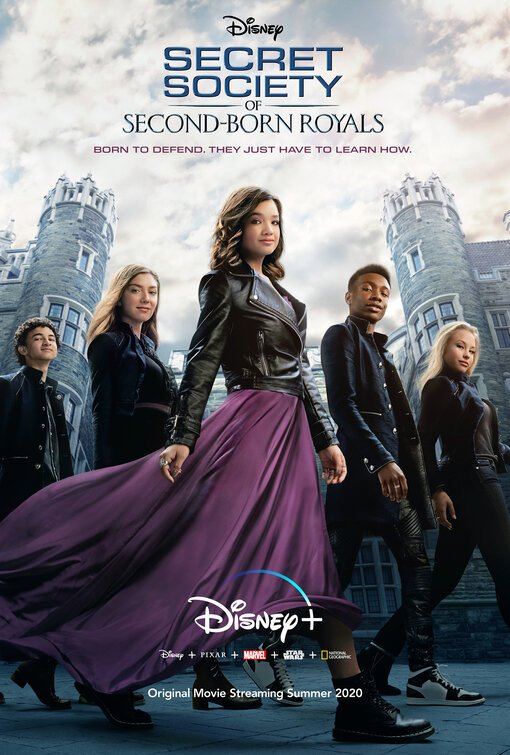 A Disney+ original movie, SECRET SOCIETY OF SECOND BORN ROYALS follows Sam and four other second born royals who are summoned to summer school. When they arrive, they learn it’s not summer school at all. They all have superpowers that are unique to second born royals. They have the whole summer to perfect their powers and join the society that protects royal families, or they’ll be sent home with their memories wiped. When a escaped prisoner comes to wreak havoc on the coronation of one teenage superhero’s sister, the teenagers must learn to work together to save the people attending the event.

SECRET SOCIETY OF SECOND BORN ROYALS is well-made and entertaining, with some good acting. However, the script needs better development between the characters. The movie has a strong moral worldview where the superhero teenagers learn to use their powers to defend other people and not to rule them. They also learn all their actions have consequences. However, there’s some action violence and a reference to a man’s homosexual boyfriend. So, MOVIEGUIDE® advises strong caution for SECRET SOCIETY OF SECOND BORN ROYALS.

(BB, AP, H, Fe, Ho, L, VV, MM):
Dominant Worldview and Other Worldview Content/Elements:
Strong moral worldview as teenagers learn to use their powers to defend others and not to rule them, they’re taught that they’re all unique and special and if they use the talents they are given along with teamwork they can defeat the bad guy, learn to fail to succeed and that actions have consequences, some anti-patriotic elements (one girl wants to end her country’s monarchy so the people can rule, but learns that a constitutional monarchy with a parliament can be a positive compromise, and villain will do whatever it takes to end the monarchy, including hurting own family), plus a feminist element as one girl wears a shirt with a feminist slogan written on it and doesn’t want to conform to how a princess should be, and a homosexual element when a comment is made that a man has a boyfriend
Foul Language:
No obscenities but four light exclamatory profanities (all OMG), plus a comment about a boy being a fungus
Violence:
Girl falls off skateboard, teenagers go through a laser maze and are hit by lasers but end up being okay after a few seconds, teenagers learn how to shoot bows and arrows, a weapons arsenal seen, a guy is punched in the face, some fist fighting, bag falls girls head and knocks her out, man throws things at girl to hurt her, guy trapped in a device
Sex:
None
Nudity:
No explicit nudity, but some female midriffs shown, and teenage girls appear in bikinis
Alcohol Use:
None
Smoking and/or Drug Use and Abuse:
None; and,
Miscellaneous Immorality:
Lying, rebellion, deceit, breaking in, kidnapping, greed, and some dysfunctional family elements where two sisters disagree on how to rule and if there should even be a monarchy, but they end up fixing their disagreement by the end.

SECRET SOCIETY OF SECOND BORN ROYALS is a science fiction adventure on Disney+ about five second born royals who they learn how to use unique superpowers to protect other people, then run into an escaped criminal trying to take down all the world’s royal families. SECRET SOCIETY OF SECOND BORN ROYALS is well-made and entertaining, with good acting and a moral worldview, but the script needs better development between the characters and warrants caution for children because of some violence and a comment about a man’s homosexual boyfriend.

The movie opens on Sam, the second born daughter of the royal family of Illyria, the smallest European country. Sam’s father and uncle both died in a plane crash when she was younger, so her mother is the queen until her older sister, Princess Eleanor, turns 18 in a few weeks and assumes her place on the throne.

Sam is the rebellious daughter who wants to tear down the monarchy and let the people rule. She wants more out of her life then just going to events and cutting ribbons. Sam and her best friend, Mike, the son of the royal groundskeeper, do everything together. After Sam’s last day at her high school for royal kids, she meets with Mike to practice their music so they can play gigs during the summer.

As Princess Eleanor’s coronation inches closer, Sam is required to attend events for appearances. However, Mike scores tickets for them to see their favorite band/ So, Sam ends up lying to her mother, Catherine, to ditch out early and meet Mike. They don’t know that the venue cards underage teenagers, so they aren’t able to get into the concert. However, as they walk toward the side entrance, Sam is able to see the code to the door from far away and get them inside.

Mike’s confused as to how Sam does this it, but they still go inside. When the music starts playing, Sam has a sensory overload attack and ends up pulling the fire alarm to make it all stop. Mike and Sam spend the night in jail because of what she did and are bailed out by Mike’s dad in the morning. However, Sam’s mother is also there.

Because of this mishap, Catherine tells Sam she’s going to summer school and living on campus. Sam does as she’s told and goes to school. When she gets there, four other royal children join her, along with their teacher, James. James informs them that they’re all there because they have secret superpowers that second born royals get. If they’re able to learn to use them, they get to join the society, run by none other than Sam’s mother, Catherine. If they fail, they will be sent home with their minds wiped.

These second born royals are excited to learn what their unique superpowers are and how to use them. However, they don’t know how important perfecting their powers is until they run into an escaped prisoner trying to take down Sam and all the royal families around the world.

SECRET SOCIETY OF SECOND BORN ROYALS is filled with action and good life lessons. The movie does a great job developing each character’s power. However, it could’ve been better if all the relationships between the young royals didn’t feel so rushed. Also, the main character’s connection to the villain needs more detail and emotional development.

SECRET SOCIETY OF SECOND BORN ROYALS has a strong moral worldview where the teenagers with superpowers learn to use their powers to defend other people, and not to rule them. They also learn that all their actions have consequences. However, there’s some action violence, a homosexual reference to a man having a boyfriend and some other minor issues. So, MOVIEGUIDE® advises strong caution.