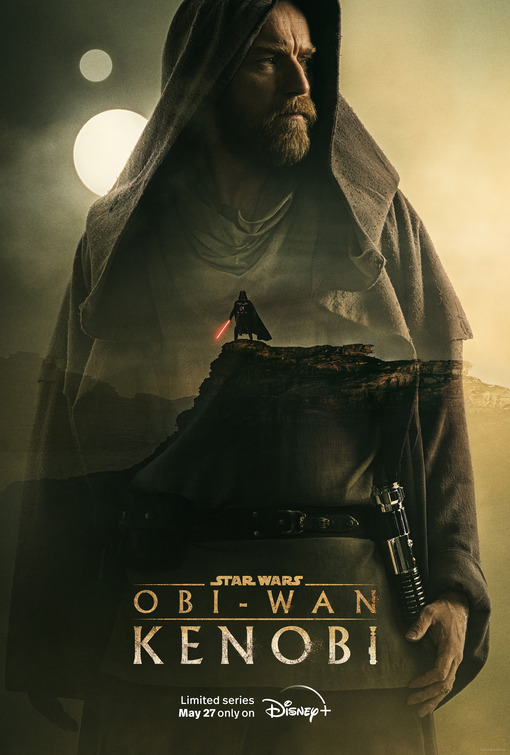 OBI-WAN KENOBI is another STAR WARS series streaming on Disney Plus. The first two episodes start 10 years after the birth of Luke and Leia Skywalker. Obi-Wan Kenobi is still on the desert planet. From a distance, he watches over Luke, who’s being raised by his aunt and uncle. Obi-Wan Kenobi must venture out from his hiding place to rescue the young, precocious Princess Leia from kidnappers. Her adopted father tells Obi-Wan he’s tracked the kidnappers to a lawless planet named Daiyu.

The first two episodes of OBI-WAN KENOBI hark back to the spirit of the first STAR WARS movie. They have lots of action, adventure and humor, especially in an elaborate chase sequence in the second episode. The best part is young Vivien Lyra Blair, who plays the 10-year-old Princess. She’s a real hoot as Leia and is the main reason the first two episodes are so enjoyable. Happily, the episodes don’t have lots of pantheistic STAR WARS mysticism. There’s brief talk, however, about bringing “balance” to the universe. MOVIEGUIDE® advises caution for children because of threats to children in OBI-WAN KENOBI.

(BB, ACAC, FR, VV, A, M):
Dominant Worldview and Other Worldview Content/Elements:
Strong moral worldview about protecting two children from dark evil forces and, specifically, rescuing one of the children from kidnappers, plus the bad guys represent an evil tyrannical empire out to murder its main opponents, with some pantheistic mysticism about bringing “balance” to the universe and using magical powers
Foul Language:
No foul language
Violence:
Strong and light action violence includes fights using laser guns, fighting with laser lightsabers, thugs put hood over 10-year-old girl to kidnap her, fisticuffs, bad guys chase man and 10-year-old girl throughout city, bad guys hang body of young man they killed in the streets as a warning to civilians, villain shoots one civilian dead and threatens to shoot another civilian, character stabs another character in the stomach with a lightsaber, female villain deliberately wounds young man in the shoulder with her lightsaber, but he gets away, girl almost falls to her death
Sex:
No sex
Nudity:
No nudity
Alcohol Use:
Implied alcohol use
Smoking and/or Drug Use and Abuse:
No smoking or drugs; and,
Miscellaneous Immorality:
Kidnapping, 10-year-old girl is disobedient and lies.

The first two episodes of OBI-WAN KENOBI, the STAR WARS series on Disney+, begin a rousing story where, 10 years after Luke and Leia were born, Obi-Wan Kenobi must venture out from his hiding place on Luke’s desert planet to rescue a young, precocious Princess Leia from kidnappers. The first two episodes of OBI-WAN KENOBI have lots of humor, action and adventure and contain no crude content, but there’s some violence and brief mysticism requiring caution for children.

The two-part intro opens with a review of what happened at the end of the last STAR WARS movie prequel, when the evil Sith took control of the government.

Ten years later, Obi-Wan Kenobi is still on Tatooine, the desert planet, watching over Luke Skywalker, who’s living with his Uncle Owen and Aunt Beru. Kenobi is living a life in the shadows by trying to keep a low profile. However, the Empire has sent a Grand Inquisitor and a male and female assistant to find and kill a young Jedi who’s reportedly hiding on Tatooine. They find him hanging out in a saloon on Mos Eisley, but he escapes.

Meanwhile, on the planet Alderaan, Leia’s adoptive parents, Queen Breha Organa and her husband, Senator Bail Organa, are having trouble keeping the precocious 10-year-old daughter focused. Leia loves to run into the forest with her little robot drone and explore. However, a mysterious figure is stalking her, and he kidnaps Leia.

Senator Organa asks Obi-Wan, aka Ben, to find and retrieve Leia. Ben is reluctant, because he’s not as strong as he used to be and needs to keep tabs on Luke. The Senator convinces him, however, that it’s also important to keep Princess Leia safe. Organa’s investigators believe Princess Leia has been taken to a lawless planet named Daiyu.

Kenobi digs up his lightsaber and travels to Daiyu. However, Leia’s kidnapping turns out to be a trap created by the Grand Inquisitor’s female assistant, Reva, to draw out Obi-Wan so she can kill him and get personal credit for it from the Emperor, Darth Sidious.

The first two episodes of OBI-WAN KENOBI hark back to the spirit of the first STAR WARS movie. They have lots of action and adventure, especially in the second episode, which has an elaborate, hilarious chase sequence where Obi-Wan tries to rescue a skeptical Princess Leia from the bad guys. Leia has trouble believing this old man is really a Jedi. She demands that he prove he can use the Force by making her levitate, but Obi-Wan is trying to avoid revealing to the Empire that he’s still alive.

The best part of the two episodes, however, is young Vivien Lyra Blair, who plays the 10-year-old Princess. She’s a hoot as Leia. She’s given many funny lines that make the two episodes one of the most enjoyable STAR WARS stories in years. The two episodes would not be as enjoyable without her. This may present a problem in the next four scheduled episodes of the first season, because it could take the focus off the title character.

Happily, the first two episodes don’t have a lot of STAR WARS mysticism. There’s brief talk about bringing “balance” to the universe and the “Force.” Also, the episodes contain some displays of magical telekinetic powers between the title character and the villains.

MOVIEGUIDE® advises caution for older children because of the violence in OBI-WAN KENOBI, which contains threats to children.