"Family Always Sticks Together, Even in Basketball" 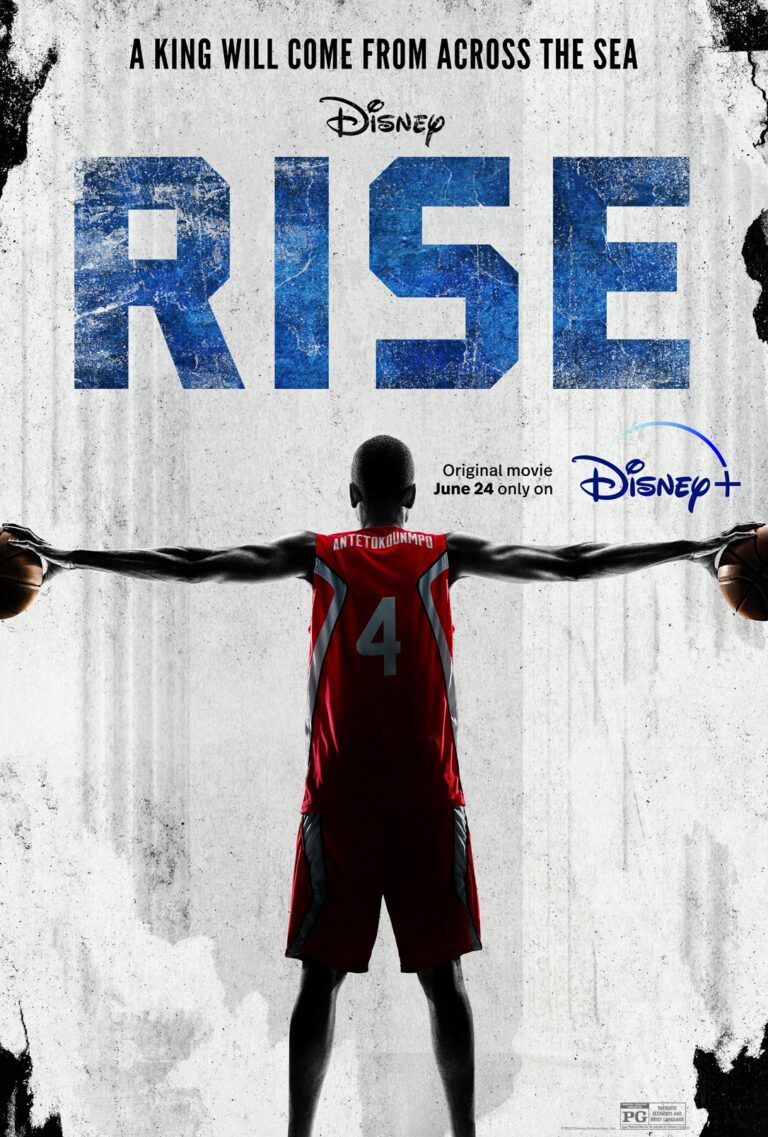 Streaming on Disney Plus, RISE is the inspirational true story of a close-knit, Nigerian-Greek immigrant family’s journey to produce the first three brothers ever to star in the NBA. Vera and Charles flee from Nigeria to make a dangerous trek to build a better life in Greece. They work hard as a family to survive. The oldest boys discover a free basketball clinic. Their abundance of natural talent is soon uncovered. To get to the pros, however, they must have legal status. Against all odds, they team up with a new agent, but can they succeed, and can the family stay together?

RISE is an excellent movie with plenty of heart and soul. The audience rides the waves of the family’s struggle to overcome through faith, prayer, hope, and love. The movie tries to take on too much to cover 25 years. This leads to some confusion and some gaps in the story. However, the acting in RISE is superb, which results in a wonderful portrayal of an incredibly lovable family. We laugh with them. We cry with them. We win with them. Bravo!

(CCC, BBB, L, V, M):
Dominant Worldview and Other Worldview Content/Elements:
Very strong Christian, biblical, moral, redemptive worldview where the main characters, and their entire family, are strong Christians who pray the Lord’s Prayer on their knees together at night, plus the mother wears a Cross around her neck, there are Crosses on the walls of their home, and they pray both in thanksgiving and in need
Foul Language:
Two light profanities, plus a racial epithet of “blackie” and a vulgar “you suck”
Violence:
Anti-immigrant violent mob smashes a bus window, and brief scenes of violence against immigrants by Greek police officers who arrest them
Sex:
No sexual immorality, but a married couple snuggles, fully clothed, in bed
Nudity:
No nudity
Alcohol Use:
No alcohol use
Smoking and/or Drug Use and Abuse:
No smoking or drugs;
Miscellaneous Immorality:
Children sometimes disobey parents.

RISE is the inspirational true story of a close-knit, Nigerian-Greek immigrant family’s journey to produce the first three brothers ever to star in the NBA. Streaming on Disney+, The movie gives wonderful tribute to the purpose and power of a family that sticks together and prays together. They show honesty, integrity, and loyalty. Through Christian faith, prayer, hard work, and a lot of love, what seems impossible, becomes possible. There is some racist, anti-immigrant violence, and two light profanities. MOVIEGUIDE® advises caution for younger children, but RISE is a winner for the whole family.

Vera and Charles Antetokounmpo flee Nigeria in hopes of a better life in Greece. The journey is too dangerous to bring their infant son. They leave him with family in hopes to send for him when they settle into their new life. The couple barely makes it through Turkey, after they escape a brutal police invasion of immigrants in the middle of the night.

They begin a new life in Greece, where they are scarcely tolerated. Their family grows. The couple have FOUR more sons. Vera and Charles repeatedly apply for legal residency status in Greece but are denied because they don’t have jobs on the payroll. However, they can’t get jobs on the payroll because they do not have residency status. Caught in frustration, they take odd jobs. Poverty leads them often to the brink of eviction. The family sells souvenirs to tourists in Athens to make ends meet.

Finally, Charles is hired on the payroll as a janitor. He confidently makes a final attempt to gain residency status, but he’s turned away again because his job is considered too menial. Meanwhile, his children were all born in Greece. The parents fear, if they’re found out, the government will separate their family permanently. So, Vera and Charles are forced to live in the shadows in order to keep their family safe, and together.

One day, the two oldest sons, Giannis and Thanasis, happen upon a free after-school basketball program. Vera and Charles reluctantly give their permission. Little do did they know the boys will become basketball phenoms.

The boys travel a good and unsafe distance to get to the gym. They also must share a pair of old sneakers. Through hard work, dedication and an abundance of natural talent, the boys rise to the top of the local basketball league. They draw interest from Greek scouts to play in the International European basketball league, but the Greek scouts back out when they discover they aren’t legal residents.

Basketball opportunities appear to be bleak. They become more hopeful when they sign on with a friendly basketball agent, Harris, until they find out they are his first clients. With the odds stacked against them, how can this family go from struggling to survive without a homeland or any support, to producing three NBA champions?

RISE is an excellent movie with plenty of heart and soul. The audience rides the waves of struggle in the spirit of faith, family prayer, hope, and love. The movie tries to take on too much to cover 25 years. This leads to some confusion and a few gaps in the story. However, the acting in RISE is superb, which results in a wonderful portrayal of a most incredibly lovable family. We laugh with them. We cry with them. We win with them. Bravo!