"A Mix of Memories, Emotions and Music" 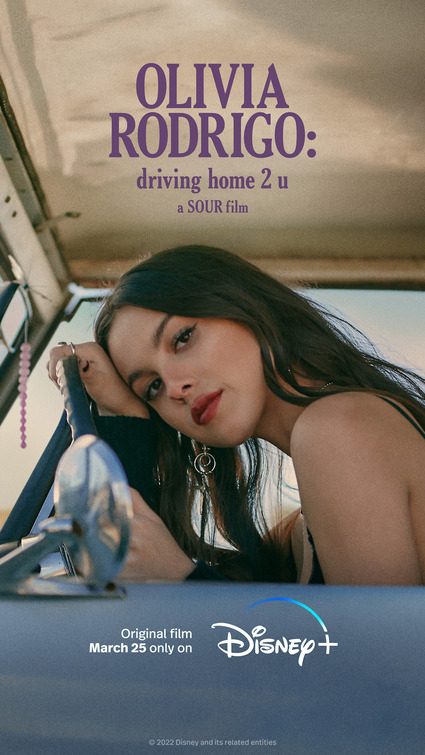 OLIVIA RODRIGO: DRIVING HOME 2 U is a documentary on Disney Plus recounting the memories of Olivia Rodrigo putting together her record-breaking debut album, SOUR. Rodrigo takes one last road trip from Salt Lake City, Utah to Los Angeles, including places where she began writing her debut album, to look back on her life from the success she has now. Rodrigo opens up about her emotions surrounding her heartbreak that led to writing most of the songs, as well as the struggles she encountered on the way to releasing the album.

The production quality of OLIVIA RODRIGO: DRIVING HOME 2 U is outstanding, with beautiful scenery and filming in every single shot. There’s a perfect mix of interviews, talking, song creation/production, and musical performance. The movie keeps viewers entertained throughout its entirety. It helps viewers know and understand more about the real Olivia behind the music. DRIVING HOME 2 U has a strong Romantic, Non-Christian worldview and some foul language. Olivia is driven by her emotions and by following her heart. For these reasons, MOVIEGUIDE® advises caution for older children and teenagers.

(RoRo, Ab, O, B, LL, A, M):
Dominant Worldview and Other Worldview Content/Elements:
Strong Romantic, non-Christian worldview where the main character is driven by her heart and emotions, with a brief mention of putting Satan in a song, a demonic voice singing a lyric, as a joke, plus some light moral elements promoting love, being open and honest, never giving up, and more
Foul Language:
Four obscenities as well as other song lyrics bleeped out on screen and in audio, and about 10 light profanities, most of which are OMG
Violence:
No violence
Sex:
No sex
Nudity:
No nudity
Alcohol Use:
There’s a song lyric about drinking
Smoking and/or Drug Use and Abuse:
No smoking or drugs; and,
Miscellaneous Immorality:
Hurt, anger, revenge, jealousy, and pettiness all portrayed through different songs and song lyrics, and messed up views of love and relationships are portrayed in song lyrics.

OLIVIA RODRIGO: DRIVING HOME 2 U is a documentary recounting the memories of Olivia Rodrigo putting together her record-breaking debut album, SOUR. Recently released, the movie is currently streaming on Disney+.

Rodrigo takes one last road trip from Salt Lake City, Utah to Los Angeles, to places where she began writing her debut album, to look back on that time in her life from the place she’s at now. The audience follows along, learning more about the real Olivia behind her highly popular, record-breaking songs. Rodrigo discusses different struggles she encountered on the journey to releasing her album, with her number one critic being herself.

The movie recounts each different song from Rodrigo’s album SOUR, having Olivia talk about how she was feeling at the time, what she was going through, what the songs truly meant to her, etc. There are also performances of each song, whether it be her and a band in the desert, under a bridge, at a gas station, intensive clips of Olivia in the studio, or just the song playing over clips of scenery and of Olivia traveling.

Most of the songs on the album surround her highly public breakup. So, there’s a great deal of vulnerability from Olivia regarding what was really going on at the time and all of the emotions involved. She explains how writing these songs was her way of creative expression when she was going through something she felt no one understood.

Rodrigo recounts the shock of how well her song “Drivers License” was received, how she went from singing in her room with no audience to instantly realizing the world was now her audience. That’s when she decided she wanted to create an entire album. The documentary goes on to show how much Olivia has changed since she started this journey back in 2020 and how she plans to keep creating, with hopefully a less sad album next time!

The production quality in DRIVING HOME 2 U is outstanding, with beautiful scenery and filming in every single shot. The program has a perfect mix of interviews, talking, song creation/production, and musical performance. The movie keeps viewers entertained throughout its entirety, wanting to know and understand more about the real Olivia behind her popular music. The documentary authentically depicts the raw emotions and pure talent surrounding the artist and her music.

OLIVIA RODRIGO: DRIVING HOME 2 U contains a strong Romantic worldview. Olivia seems to be controlled and driven by her emotions. Most of the content discussed has to do with following one’s heart even when knowing logically it wasn’t the right choice. The songs created and talked about, as well as the feelings surrounding heartbreak, make this quite clear. There are some redeeming qualities mentioning the importance of honesty, love, not giving up, and more. The program’s non-Biblical worldview and beliefs outweigh the program’s redeeming qualities. DRIVING HOME 2 U also contains a few obscenities and some light profanities. In addition, there’s one song that includes a comical mention of putting Satan in a song, with a demonic voice singing one lyric. For these reasons, MOVIEGUIDE® advises caution for older children and teenagers.