"To Err Is Human, To Forgive Divine" 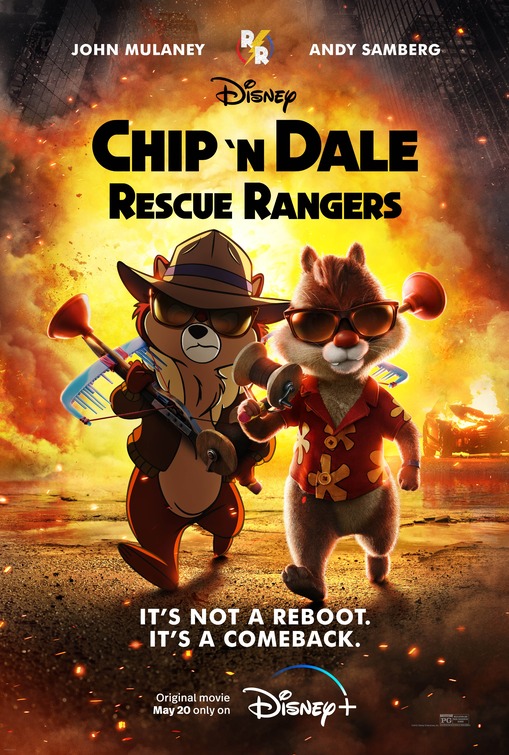 CHIP ’N DALE:  RESCUE RANGERS is an animated comedy spoof on Disney Plus. It opens by showing how Chip and Dale became friends in third grade, went to Hollywood and found fame and fortune starring in a TV series titled RESCUE RANGERS. In the series, they led a group of crimefighters. Thirty years later, Chip is still angry that Dale tried to go solo and got their series canceled. They get back together, when a criminal named Sweet Pete kidnaps their friend, Monty. Pete’s gang has been kidnapping toon characters and changing their appearance to make bootleg movies overseas.

(BBB, CC, VV, N, M):
Dominant Worldview and Other Worldview Content/Elements:
Very strong moral worldview about saving a friend, hope, stopping a criminal, and getting justice, with strong redemptive, biblical elements promoting forgiveness (a character says, “To err is human, to forgive divine”) and sacrifice
Foul Language:
No obscenities or profanities, but three instances of butt
Violence:
Some strong and light frenetic slapstick violence such as a cartoon character hits another cartoon character over the head so that a large cat chasing them will be distracted by the cartoon birds flying above the one character’s head, the characters try the same thing to distract another large villain chasing them but they have to hit each other more than once, two cartoon characters are trapped in a machine that erases their distinctive visual features and replaces them with other features (for example, one character’s chipmunk ear is replaced by a Snoopy dog’s ear), two characters fall into a sewer and they are swept away, a cartoon character with a battle axe chases two other cartoon characters (he throws his axe once and grabs them at one point, but they escape), fighting and punching in one scene, a cartoon character’s head is divided into squares by a steel crate made of square holes because he’s made of putty, two characters point guns at one another, polar bear character slams into a window, a cartoon character is partially burnt, an explosion occurs that knocks characters back, a character rides a small fireworks rocket through a glass window and bangs against some steel objects in a building, and machine transforms cartoon character into a large, scary looking cat cyborg with a cannon for an arm, cat cyborg fires cannon at other characters
Sex:
No sex
Nudity:
Upper human male nudity in one joke about Chippendale dancers in a publicity photo, and upper cartoon male nudity in another scene
Alcohol Use:
No alcohol use
Smoking and/or Drug Use and Abuse:
No smoking or drugs; and,
Miscellaneous Immorality:
Character holds a grudge, kidnapping, kidnap victims forced to get cosmetic surgery, criminal sells bootleg videos on the black market, and a cartoon fly and a cartoon mouse get married and have children.

CHIP ’N DALE:  RESCUE RANGERS is an animated comedy spoof on Disney+ where the two famous chipmunks must rescue an old friend from a criminal named Sweet Pete who’s been kidnapping toon characters and changing their appearance to make bootleg movies overseas. CHIP ’N DALE:  RESCUE RANGERS is a perky, funny, exciting, witty sendup of modern private detective stories, with a redemptive message about forgiveness, but it has frenetic, comical slapstick violence that warrants light caution for older children, including young teenagers.

Based on The Disney Channel’s animated series of the late 1980s, RESCUE RANGERS depicts a fantasy world where famous cartoon characters and human beings interact with one another. It’s filmed in a style reminiscent of the classic 1980s movie WHO FRAMED ROGER RABBIT?, but with less adult material. There are multiple references and comical cameos to many other cartoon characters from TV and film, from Lumiere of BEAUTY AND THE BEAST to He-Man. A couple movie poster jokes include comical references to Batman, E.T. and Mrs. Doubtfire.

The movie opens with an overview of how Chip and Dale became friends in third grade and went to Hollywood, where they found fame and fortune starring in the RESCUE RANGERS television series in which they led a group of crimefighters. In the third year, however, Dale got tired of playing second banana to Chip and, without telling Chip, did a pilot for a planned spy series. Sadly, the pilot didn’t get picked up, and the network canceled RESCUE RANGERS. Chip blames Dale for hurting their careers and breaks off their friendship.

Thirty years later, Chip is an insurance agent and Dale is still working in Hollywood, mostly doing commercials. Chip gets a frantic call from their old friend, Monterey Jack, who played one of the crimefighters working with them. Monty tells Chip he owes the Valley Gang, a notorious group of criminals, lots of money because of his addiction to expensive cheese. He tells Chip that the gang’s leader, Sweet Pete, has been kidnapping cartoon characters and changing their appearance to get around the copyright laws and make bootleg animated movies overseas. Chip promises he’ll try to think of something to help. However, when Dale shows up too, Chip leaves because he’s still angry with Dale about getting their show canceled.

Later that night, Dale calls Chip and says the police called and told him Monty’s been kidnapped. They want a statement from them because they were the last ones to see Monty. So, Chip and Dale meet the police back at Monty’s apartment. After listening to their story, the detective in charge, Lt. Putty, isn’t very helpful. However, his assistant, Ellie, convinces them to try to find the suspected warehouse where Sweet Pete takes his kidnap victims.

The search leads Chip and Dale down a rabbit hole of adventure, mystery and comedy. Can they save Monty before he’s transformed and shipped overseas? Or, will Sweet Pete do the same thing to them he’s trying to do to their friend?

CHIP ’N DALE:  RESCUE RANGERS is a witty, exciting sendup of modern private detective stories. It also has some funny cameos by famous cartoon characters. For example, Peter Pan shows up as an angry middle-aged man who’s upset about no longer being a child star.

RESCUE RANGERS has a strong moral worldview about saving a friend and stopping a criminal. Also, forgiveness is a major redemptive element in the story. A character even says at one point, “To err is human, to forgive divine.” However, RESCUE RANGERS has some frenetic, comical slapstick violence that warrants light caution for older pre-teengers. Also, younger children probably won’t relate to the inside jokes about private detective stories in the new RESCUE RANGERS. Such jokes might tickle their parents’ funny bones, though.