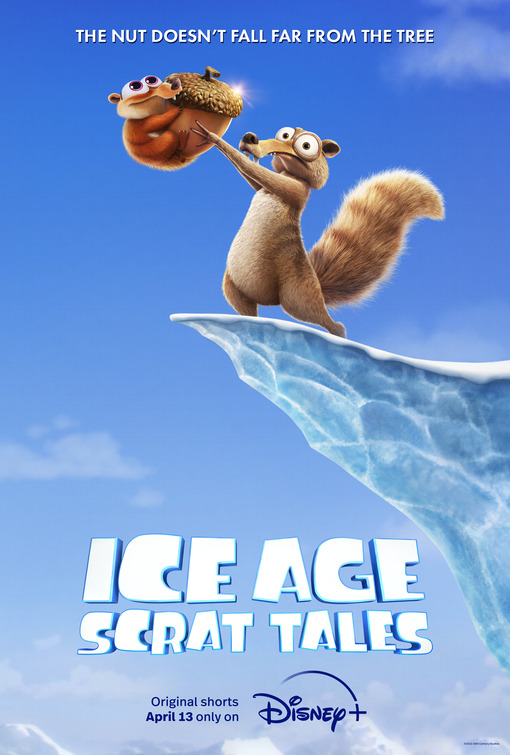 ICE AGE: SCRAT TALES is an animated comedy on Disney Plus. Consisting of six short episodes, it focuses on Scrat the Ice Age squirrel trying to figure out fatherhood. One day while chasing the infamous acorn, he finds a baby Scrat instead. It takes a brief time, but Scrat soon starts caring for Baby Scrat, and both begin to enjoy their time together. That changes, however, when Baby Scrat finds the acorn. From that moment, they fight one another for the acorn until it plunges over a cliff into some lava.

The production quality and animation in ICE AGE: SCRAT TALES are well done in every respect, with the colors vibrant as always. For as many times as Scrat has appeared, the story here proved to be unique. SCRAT TALES has many hilarious, classic slapstick situations. It also has moral, redemptive, heartfelt content celebrating love and family. Also, Scrat is appropriately punished when he tries to take the acorn away from Baby Scrat. Surprisingly, one SCRAT TALES episode confirms there’s a beautiful afterlife in Heaven waiting for us, but in a comical way.

(BB, C, V, M):
Dominant Worldview and Other Worldview Content/Elements:
Strong moral worldview celebrates love, family and parenthood and includes an adult squirrel being punished for trying to take an acorn away from a baby squirrel, with a redemptive scene showing that a beautiful afterlife in Heaven awaits us, but in a comical way
Foul Language:
No foul language
Violence:
Slapstick comic violence includes some wrestling or falling over cliff edges, squirrel gets whacked with tree branches or catches on fire, natural disasters such as cliffs collapsing and lava explosions, squirrel suffers electric shocks, two squirrels dangle precariously on a tree limb high above a deep canyon in one episode, father squirrel struggles to please a crying baby squirrel by making musical sounds banging on his head and an acorn in another episode
Sex:
No sex
Nudity:
No nudity
Alcohol Use:
No alcohol use
Smoking and/or Drug Use and Abuse:
No smoking or drugs; and,
Miscellaneous Immorality:
Dysfunctional family portrayal with the father squirrel personally struggling to choose the baby squirrel over an acorn.

ICE AGE: SCRAT TALES is an animated comedy on Disney+ featuring six short episodes of Scrat the Ice Age squirrel as he figures out fatherhood, after only knowing how to prioritize one thing in his life – chasing the infamous, unobtainable acorn. The miniseries was recently released as one final Scrat adventure and one final animation by Blue Sky Studios, a farewell if you will.

The episodes open with an ecstatic Scrat carrying around his long sought after acorn. After forcing the acorn into the ground, Scrat watches as the cliffs start falling, sending the acorn off into the world. Scrat chases down the acorn, or what appears to be the acorn, only to find a baby Scrat instead. Scrat has absolutely no idea what to do.

As soon as Baby Scrat’s little hand touches Scrat’s hand, however, his brain splits in half to give room for the baby and not just the acorn. For the first time ever, Scrat is able to focus on something without thinking about the acorn.

Scrat begins learning how to take care of Baby Scrat, and the two are both happily enjoying their time together. That changes, however, when Baby Scrat finds the acorn. Viewers then see a fight inside Scrat’s brain over the baby and the acorn. Will Baby Scrat take over Scrat’s brain as the acorn once did?

From the moment the acorn re-enters the picture, Scrat and baby Scrat are both continually fighting to be the one that grabs the acorn. The two continue their adventures, sharing laughs along the way and continuing to form a bond. The more Scrat learns to take care of the baby, the more he starts to let go of the hold the acorn has on him.

Scrat and the baby stop fighting over the acorn and begin working together to keep the acorn instead! The two squirrels seem to be getting along quite well at this point, regardless of the acorn. The acorn flies into the abyss eventually, and the squirrels both mourn and move on. Scrat and Baby Scrat seem to be living happily ever after, until Scrat is on his deathbed.

Have both squirrels really moved on from the acorn? Or does the ending hold another plot twist?

The production quality of ICE AGE: SCRAT TALES is well done in every respect. For as many times as Scrat has been portrayed, the story in this miniseries proved to be unique. The animation holds to typical, previous ICE AGE standards, with the colors vibrant as always. The miniseries, as short as it is, is rather heartwarming and keeps viewers wanting more.

ICE AGE: SCRAT TALES has a moral, redemptive worldview celebrating love and family. Also, Scrat is appropriately punished when he tries to take the acorn away from little Baby Scrat. Surprisingly, one SCRAT TALES episode confirms there’s a beautiful afterlife in Heaven waiting for us, but in a comical way.