"A Little Too Woke" 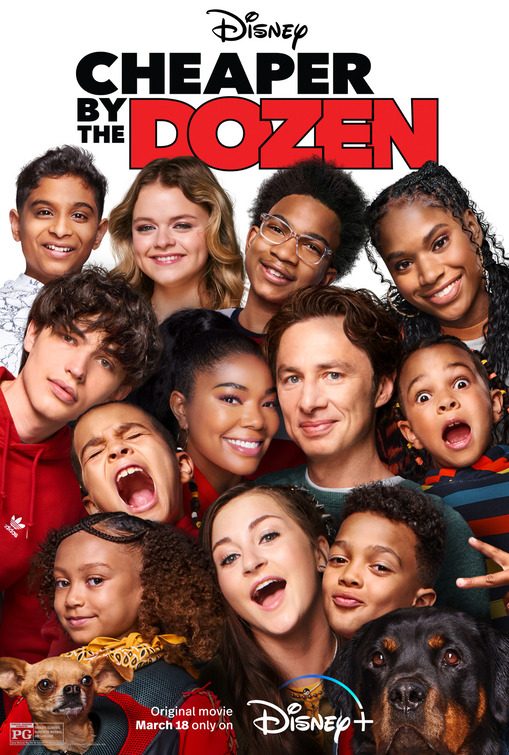 CHEAPER BY THE DOZEN is a comedy streaming on Disney Plus. It’s another loose Disney remake of the beloved, heartwarming 1950 family movie about an efficiency expert, his wife and their 12 children in the 1920s. This new version tells a story about a white chef and his black wife, with children from previous marriages. Paul Baker and Zoey marry and have children of their own. They also adopt an orphaned Indian boy. Problems occur when Paul gets some money to turn the family’s breakfast restaurant into a franchise and decides to move the family to a fancy suburb in Los Angeles.

(RoRo, PCPC, B, C, FR, L, V, N, M):
Dominant Worldview and Other Worldview Content/Elements:
Strong Romantic, liberal view of family that has some woke, politically correct elements about race and family (including one of several white women seems a bit racist, and she eventually moves to Idaho, which seems to be an attack on conservatives, black man mentions “systemic racism” and is upset about his ex-wife’s white husband being involved in raising their two children, exhibiting his racism, and the mixed race family in the movie has named their two dogs Bark Obama and Joe Biten), with some positive moral, redemptive elements stressing family, forgiveness and getting along, with scenes of reconciliation, plus woman teaching yoga classes greets people in one scene with “Namaste,” a pantheistic Hindu greeting that can mean, “The divine in me bows to the divine in you”
Foul Language:
Three obscenities (including one “h” word and two “d” words), three OMG profanities, and three light uses of “butt”
Violence:
Light slapstick violence such as young children on scooters do a race in first floor of a house and knock some things over while occasionally falling down and spill a bunch of oranges on a kitchen table onto the floor, man does a “cannonball” into a gated community pool, boy fights some bullies at school and gets into trouble
Sex:
No sex
Nudity:
Upper male nudity at swimming pool
Alcohol Use:
No alcohol use
Smoking and/or Drug Use and Abuse:
No smoking or drug content; and,
Miscellaneous Immorality:
Children seem to be gambling on a scooter race they’re staging inside a house, one woman is somewhat of a snob, teenage girl sneaks out of the house and stays out all night.

CHEAPER BY THE DOZEN borrows the title of a beloved 1950 movie about an efficiency expert, his wife and their 12 children in the 1920s to tell a story about a white chef and his black wife with children from previous marriages who marry, have children of their own and then adopt an orphaned Indian boy and take in the husband’s teenage nephew. Streaming on Disney+, CHEAPER BY THE DOZEN is funny and heartwarming in fits and starts, but it reduces the number of children from 12 to 10, undermines the original movie’s concept of one woman birthing 12 children with one man, and is a little too woke and politically correct.

In the story, Zoey and Paul Baker each have two children from previous marriages. Zoey’s ex-husband, Dom, is a basketball star with many endorsements, and Paul ex-wife, Kate, is a ditzy yoga instructor who helps them babysit their nine children. Paul is the chef and owner of his own restaurant in Los Angeles. Zoey convinces Paul to only serve breakfast items, and the restaurant becomes popular.

Paul has created a special sauce that can make a food taste spicy, sweet or savory, depending on the type of food. The sauce attracts the attention of two female venture capitalists who look like Barbie dolls. However, when the two women give Paul a nice bonus if he agrees to turn his restaurant into a franchise, Paul decides to move the family to a bigger house in Calabasas, a ritzy suburb. Sadly, none of the children like the schools there, and Paul’s work on developing the franchise takes him out of town, away from the family.

Meanwhile, Paul’s sister has to go into rehab again. So, Paul agrees to let her supposedly rebellious teenage son, Seth, stay with them. A couple misunderstandings involving Seth lead to family conflicts that make Paul re-discover the importance of family.

This new CHEAPER BY THE DOZEN is funny and heartwarming in fits and starts, especially in the second half. The problem is that, although the older children help out with the restaurant, the subplot about the father’s preoccupation with starting a restaurant franchise doesn’t really involve the children. In the original movie, the father used the principles of his job as an efficiency expert to run the family and parent the children.

Also, the new movie reduces the number of children from 12 to 10 and turns the family into a blended family. So, it’s more like a remake of the old Lucille Ball movie YOURS, MINE AND OURS than it is a remake of CHEAPER BY THE DOZEN. As such, it undermines the original movie’s concept of one woman birthing 12 children with one man. Thus, the original movie is more pro-family than this new version. In fact, there’s a very funny scene in the original movie where a straightlaced, stern-faced woman from Planned Parenthood comes to talk to the parents about “family planning.” The parents get a kick out of introducing the sourpuss lady from Planned Parenthood to their 12 children. This scene is a great comical sendup of Planned Parenthood’s anti-family ideology.

Finally, because the family in this new CHEAPER BY THE DOZEN is a multi-racial one, the movie takes a few moments to preach politically correct, woke identity politics. For example, the family has named their two dogs Bark Obama and Joe Biten. Also, one of the white women the mother meets in the ritzy suburb is a snooty woman who’s uncomfortable around black people. At the end, the filmmakers use her character to slam conservatives who move to Idaho to get away from liberal, leftist politicians. Also, the mother’s ex-husband at one point complains to her new husband about “systemic racism.” He says that, although he’s a recognizable basketball star, he gets pulled over a lot by police. “You’ll never understand what I go through,” he adds. Of course, the notion of massive systemic racism in America is a leftist exaggeration, if not a leftist lie. For example, there are at least three studies showing that black drivers are more likely to violate traffic laws. Also, one of those three studies found that black drivers who are stopped for violating traffic laws are more likely than white drivers to be searched by police because black drivers “tend to have a ‘higher rate of outstanding warrants’” than white drivers (7 Statistics That Show That ‘Systemic Racism’ Doesn’t Exist In Policing | The Daily Wire).

MOVIEGUIDE® advises caution for older children because of the politically correct, woke politics in CHEAPER BY THE DOZEN, including its woke depiction of family. The movie also has a few light obscenities and profanities. In addition, the father’s first wife gives a Hindu greeting to the family in one scene.