ONE NIGHT IN MIAMI 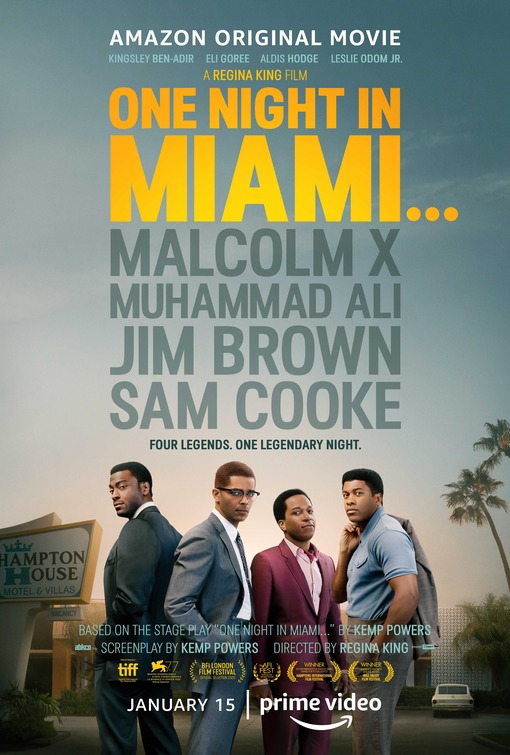 ONE NIGHT IN MIAMI is a talky political drama set in late February 1964. Three famous black men (NFL star Jim Brown, music star Sam Cooke and Malcolm X, the angry spokesman for the racist Islamofascist group, the Nation of Islam) get together one night. Jim and Sam think they’re gathered in Malcolm’s hotel room to celebrate boxer Cassius Clay’s victory over Sonny Liston. However, Malcolm wants them to join Clay in becoming Muslim civil rights activists. There’s something Malcolm’s not telling them, however, including Cassius.

ONE NIGHT IN MIAMI is earnestly directed and acted, but it’s very talky and has lots of strong foul language. Despite an uplifting moment at the end, the movie is a propaganda piece for the Nation of Islam’s hateful approach to promote civil rights for blacks. It fails to tell viewers that Malcolm X later recanted the group’s militant approach. ONE NIGHT IN MIAMI doesn’t mention the efforts of black Christian leaders like Martin Luther King and Ralph Abernathy of the Southern Christian Leadership Conference, the real leaders of the Civil Rights Movement in the 1960s.

(RoRoRo, FRFRFR, PCPCPC, RHRHRH, B, C, Cap, LLL, VV, S, N, A, D, M):
Dominant Worldview and Other Worldview Content/Elements:
Very strong Romantic Non-Christian worldview about racism in the United States circa 1964 promotes Malcolm X and the racist, heretical, politically correct rhetoric of the Nation of Islam, a black nationalist group, and pushes a politically correct, leftist revisionist history that leaves out the leadership of Christian Civil Rights leaders at the time, with some moral comments about racism and regarding the proper strategy toward racism and human rights violations, and one positive reference to Jesus washing away sins, but this comment doesn’t develop into anything, plus man describes his capitalist answer to fighting racism by helping blacks succeed in the music industry
Foul Language:
91 obscenities (many “f” words), five strong profanities, one light profanity, and a racist epithet
Violence:
Two boxing matches are shown, men get into a scuffle and man’s house is firebombed and destroyed
Sex:
A couple lewd references about wanting sex
Nudity:
Upper male nudity in boxing ring, at pool and when man in his bathrobe watches his house burn when it’s firebombed
Alcohol Use:
Some alcohol use
Smoking and/or Drug Use and Abuse:
Brief smoking; and,
Miscellaneous Immorality:
Racism but rebuked.

ONE NIGHT IN MIAMI is a talky political drama about four famous black men from the 1960s debating how militant black leaders should be while trying to seek full civil rights for black people in America. ONE NIGHT IN MIAMI is earnestly acted and directed, but it has lots of strong foul language, promotes Malcolm X, Muhammed Ali and their connection with the Anti-Christian, racist, heretical black nationalist Muslim cult The Nation of Islam, and doesn’t even mention the efforts of black Christian leaders like Martin Luther King and Ralph Abernathy of the Southern Christian Leadership Conference, the real leaders of the Civil Rights Movement in the 1960s.

After Cassius wins the fight, the men assemble in Malcolm X’s hotel room. Malcolm wants to use the meeting to announce to Sam and Jim that Clay is going to join the Nation of Islam, but Jim and Sam thought they were going to the hotel to celebrate Clay’s victory. Malcolm also want to strategize with the men on how to use their celebrity status to help black people gain more freedom. He thinks Sam, Jim and Cassius are not using their full potential as celebrities. Sam is not a fan, however, of Malcolm’s militant style. So, Malcolm starts berating him rather severely because he’s only writing love songs. The two men get into an argument that almost leads to blows.

What Malcolm hasn’t told them, however, or even Cassius, is that Malcolm has decided to split with the Nation of Islam because of the leader’s multiple extramarital affairs with teenage girls. He actually wants Cassius to join him in forming a new Islamic organization.

ONE NIGHT IN MIAMI is earnestly directed and acted, but it’s very talky. The ending is somewhat uplifting, however. Cooke finally introduces a political song about the struggle for justice, “A Change Is Gonna Come,” but Cassius Clay and the Nation of Islam leader announce that Clay is joining the Black Muslims and changing his name to Muhammed Ali. Then, a title card announces that Malcolm X was assassinated Feb. 21, 1965.

ONE NIGHT IN MIAMI has some interesting political moments, but it has lots of strong foul language and promotes Malcolm X, Muhammed Ali and their connection with the Anti-Christian, racist, heretical black nationalist Muslim cult The Nation of Islam. The movie doesn’t even mention the successful efforts of black Christian leaders like Martin Luther King and Ralph Abernathy of the Southern Christian Leadership Conference, the real leaders of the Civil Rights Movement in the 1960s. It also dilutes the violent, racist rhetoric that Malcolm X, Muhammed Ali and the Nation of Islam often used. Finally, it doesn’t mention Malcolm X’s black nationalist rhetoric, nor does it mention that, after Malcolm X split with the Nation of Islam in 1964, he changed his mind about black nationalism and stopped using the divisive group’s hateful rhetoric against white people. Like Malcom X, Muhammed Ali also eventually stopped using the racist rhetoric of the Nation of Islam. Later in life, Ali said he regretted turning his back on Malcolm when Malcom left the Nation of Islam to form a less hateful Muslim group. In 2004, he even wrote, “Malcolm was the first to discover the truth, that color doesn’t make a man a devil. It is the heart, soul, and mind that define a person.” Of course, it should also be note that the current leader of the Nation of Islam, Louis Farrakhan, may have had a hand in Malcolm X’s assassination in 1965. In fact, although Farrakhan has denied any direct influence in it, he has admitted that his strong rhetoric against Malcolm X at the time may have helped instigate the murder.

Ultimately, ONE NIGHT IN MIAMI is a step backward. In validating the extreme rhetoric of Malcolm X’s earlier speeches for the Nation of Islam, the movie plays into the current zeitgeist among many of today’s radical leftists. These activists invent horrific, false narratives about racism in America, to get votes and billions of dollars in monetary support for radical socialist policies. These policies would actually destroy Christian values, the Declaration of Independence and the Bill of Rights, the very tools that Christians like the Rev. Martin Luther King used to make so many civil rights gains for blacks in the 1960s. The Nation of Islam is dangerous.