"Documentary about a Con Artist Scamming Women on Tinder" 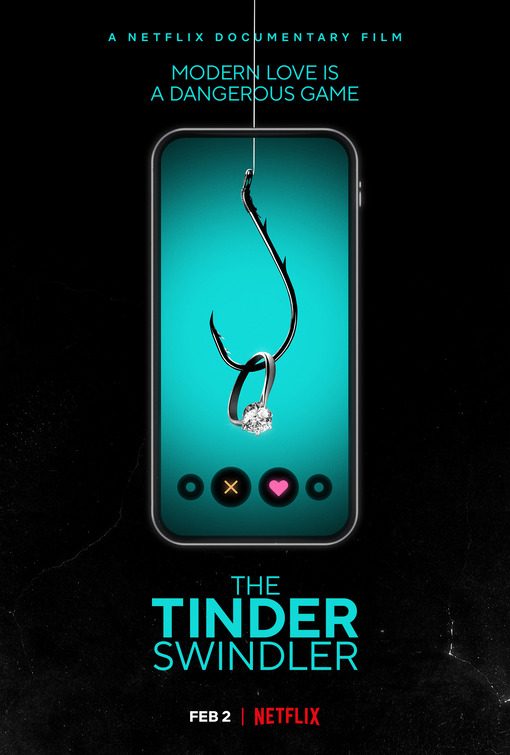 THE TINDER SWINDLER is a Netflix documentary. Two women share their story of being conned by a man named Simon, who told them he’s the son of a billionaire and owns a diamond company. The women fall in love with Simon and his extravagant lifestyle, but Simon uses them for his personal gain and cheats them out of thousands of dollars. The two women team up to expose Simon’s wrongdoings to the public. Their stories unearth many other victims, including his current girlfriend, who also lent Simon thousands of dollars.

THE TINDER SWINDLER is a powerful story of keeping your friends close and your enemies closer. Viewers will enjoy the sense of justice the movie communicates when Simon’s finally exposed for the con artist he is. Justice is eventually served, at least partially. The movie doesn’t visit some of the beautiful places where Simon took his victims. However, the compelling plot, true crime appeal and relatable characters easily make up for it. Also, THE TINDER SWINDLER has some Romantic, humanist elements and lots of strong foul language. So, MOVIEGUIDE® advises extreme caution.

(B, RoRo, H, LLL, V, S, A, MM):
Dominant Worldview and Other Worldview Content/Elements:
Light moral worldview about bringing a con man to justice includes a reference to the man’s real father who is a Jewish rabbi, with strong Romantic elements of attaining love despite the cost and some light humanist elements of living for self and doing what makes you happy even if it compromises your morals
Foul Language:
At least 31 obscenities (including at least 20 “f” words) and no profanities
Violence:
Low level of violence including one scene of a woman’s pictures of being beaten up, two scenes of a man with bloody head and being treated in an ambulance
Sex:
A description of intercourse, some suggestive dancing in one scene and a glorification of cheating on multiple women
Nudity:
No explicit nudity but two images of a woman in bed with cleavage exposed
Alcohol Use:
Several scenes of adults drinking
Smoking and/or Drug Use and Abuse:
No smoking or drugs; and,
Miscellaneous Immorality:
A moderate level of miscellaneous immorality such as greed, revenge, lust, infidelity, fraud, and exploitation.

THE TINDER SWINDLER is a documentary on Netflix about women who have been conned by a handsome man on Tinder, the popular dating app. Two women share their horrific stories of stalking, threatening text messages and even threats on their lives as they meet up with a man named Simon Leviev, a billionaire’s son. At first, the dates are full of fun, with cool cars, wild parties and luxurious living, but that all ends when Simon’s thievery changes their lives forever.

Cecilie Fjellhoy, one of Simon’s victims, is the first to share her story in the movie. As someone who has been on Tinder for seven years, Cecile has run the gamut of men in her thousand matches. However, one man she meets, Simon Leviev, seems too good to be true, and is. As the “prince of diamonds,” Simon says he owns LLD Diamonds, which was owned by his father. A family man with a child of his own, he says he just wants a companion to join him as he travels.

On Cecilie’s first date with Simon, he whisks her away on his private jet to Bulgaria, where they have an intimate, romantic evening. She quickly learns he’s been in jail in South Africa, but claims he is innocent. In the morning, he tells her it’s best if she goes home. Thinking the relationship will die out, it instead continues with romantic messages and flowers. Once they become officially involved, he tells her has a deal in the diamond industry worth $70 million. He also tells her it’s a dangerous business, with threats made on his life.

Meanwhile, Pernilla Sjoholm, another one of Simon’s victims, shares a similar story. An independent, impulsive woman, Pernilla also finds Simon on Tinder. She has dated a guy in the diamond industry before, so she’s a bit more cautious. They have a lot of fun when she goes with him to dinner, and they quickly make a connection. However, she just wants to remain friends. Simon visits her in the same way he visits Cecilie, and neither know of each other’s existence, especially when Simon asks Cecilie to move in with him.

In the middle of the night, Simon tells Cecilie his enemies are tracing his whereabouts, and he needs to use Cecilie’s credit cards. He asks her to travel to Amsterdam to find him and give him $25,000. Soon, however, he’s told there is a security breach, and his enemies know where he is. They need to leave by plane immediately. As usual, he needs more money to pay his team and her card isn’t working. Simon then employs Cecilie at LLD Diamonds. She receives $94,000 each month, as well as a deposit of $250,000, which is quickly proven to be fake.

Meanwhile, in Greece, Simon tells Pernilla he’s met a new girlfriend, Palona, and they meet up in Mykonos. There, he lives the high life with Palona and Pernilla, and then moves onto Rome. He then swindles Pernilla out of thousands of dollars as well.

Cecilie, in debt of $250,000 by this point, travels to Amsterdam to get a check from Simon to pay back the money he’s taken. Simon is cold to her, and they don’t have a pleasant experience together. When Cecilie cashes the check, she realizes no payment has been made and discovers she’s been swindled. The bank informs her Simon is a professional con artist and has numerous names and accounts. She travels to be with her mom, then receives threatening phone calls. She reaches out to two photography journalists from a newspaper, who break the story. Simon, who legally changed his name from Shimon Hayut in 2017, has been a con artist since his late teens.

The movie has an overarching romantic tone. Love is the ultimate ideal everyone wants to attain. Love is intertwined with whirlwind romance, and Cecile has a one-night stand on her first date with Simon because of this. She wants love, but it’s never attained. The movie compares her story to Disney movies like BEAUTY AND THE BEAST. There’s one reference to religion in THE TINDER SWINDLER, as Simon’s real father is a rabbi. This leaves viewers – and victims – with a sense of hopelessness, filled only temporarily with justice when Simon gets his just desserts.

The cinematography in TINDER SWINDLER is well done, filmed in a similar vein as many documentaries. Having said this, it is missing a better experience for viewers with all the places Simon went with these women. Audiences will be left wanting to see and know more about places like Norway, Netherlands and Germany, among others. Creators could have used extended footage of the spectacular views and many famous sights the women experienced during their time with Simon.

THE TINDER SWINDLER is a relatively clean movie. There is one description of a romantic sexual encounter, plus one scene of men and women dancing and making lewd sexual gestures. Foul language is the biggest culprit, with more than 30 obscenities, mostly “f” words. There’s also one scene of a victim who had been beaten, and two scenes with a man who had been hit on the head. There are also underlying issues with morality such as greed, revenge, lust, infidelity, selfishness, and exploitation. Because of the problematic issues in THE TINDER SWINDLER, including the strong foul language and references to sex, media-wise viewers should exercise extreme caution.