BETTER NATE THAN EVER

"Dancing and Singing to the Beat of the LGBT Drum" 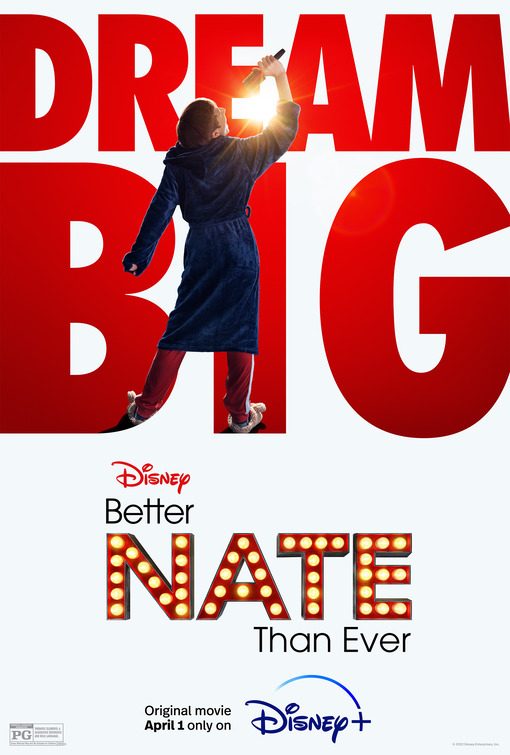 BETTER NATE THAN EVER is a musical streaming on Disney Plus. It follows 13-year-old Nate Foster, who dreams of making it big on Broadway. Nate learns his parents are going on vacation over the weekend. So, he and his best friend, Libby, decide to take a bus to New York City to audition for LILO AND STITCH: THE MUSICAL. However, the two middle-schoolers realize that no adult supervision in one of the largest city in America could make achieving their dreams more complicated.

BETTER NATE THAN EVER has a strong non-Christian, politically correct, homosexual worldview. It encourages children to be who they are, without shame, even if it means lying to and disobeying your parents. Also, the title character wears lipstick, his phone case is sequined, he has a rainbow rabbit’s foot charm on his backpack. BETTER NATE THAN EVER contains does have some minor moral, redemptive elements stressing family, forgiveness and love. However, MOVIEGUIDE® thinks media-wise parents and their families will want to skip this movie musical entirely because of its offensive, perverse political agenda and encouragement of teenage rebellion.

(RoRoRo, PCPCPC, HoHoHo, AbAbAb, B, V, S, MM):
Dominant Worldview and Other Worldview Content/Elements:
Very strong Romantic, politically correct, homosexual worldview promotes an anti-biblical, immoral view on identity, there are some mild moral elements like forgiveness and the importance of family and friends
Foul Language:
No obscenities or profanities, but there are some brief vulgarities such as “crap”
Violence:
A character accidently hits a bully in the face, and his nose starts to bleed, there are some other examples of verbal bullying
Sex:
No sex scenes, a character mistakes the word photographic with pornographic, the LGBT homosexual and cross dressing undertones are not overtly sexual, but they are strongly present, and a boy and a girl are about to kiss, but they are interrupted
Nudity:
No nudity Alcohol Use/Abuse: No alcohol use
Smoking and/or Drug Use and Abuse:
No smoking or drugs; and,
Miscellaneous Immorality:
The main characters lie to their parents and to others and go behind their backs, and title character consistently puts his needs before his parents, brother and even his best friend.

BETTER NATE THAN EVER is a musical streaming on Disney+ and based on director Tim Federle book of the same name.

The movie introduces Nate Foster, a 13-year-old boy whose biggest dream is to make it on Broadway. The first step? Land the lead role in his middle school’s musical. Nate’s best friend, Libby, is also waiting to see if she earned a spot in the cast.

Nate is so ecstatic to see the results that the daily bullying on the bus can’t get him down. However, Nate’s heart sinks when he not only misses out on the lead role but is cast as a tree, which is any aspiring, young theater student’s worst nightmare.

Libby hatches a plan to take the overnight bus to New York City and audition for a real musical, LILO AND STITCH: THE MUSICAL. Nate likes the idea at first but knows his parents won’t allow him to go alone.

When he gets home from school that night, however, he learns his parents will be gone on vacation and that his older brother, Anthony, has an away track meet. This gives Nate and Libby the perfect opportunity, and the two friends escape to pursue their dreams.

Once in New York City, the two middle schoolers realize that navigating the city and auditioning without a parent there will be more difficult than they had first planned. After Nate and Libby are turned away from the audition because they’re alone, Nate’s Aunt Sherrie shows up and saves the day.

Unable to keep their secret, Nate tells his aunt they are in New York City alone. Libby realizes that acting on Broadway is not her dream, and so the two begin their journey back home. However, at the last second, Nate gets a callback that could change his life forever.

While Nate never explicitly comes out as homosexual in BETTER NATE THAN EVER, the movie’s LGBT message is made clear through visual imagery and a conversation between Libby and Nate. When Libby confesses her feelings for Nate, he replies, “You know how much you mean to me, but I’m not. . . like that.”

There are other constant, subtle nods to Nate’s homosexuality. For example, he wears lipstick, his phone case is sequined, he has a rainbow rabbit’s foot charm on his backpack, and he’s bullied for his love for theater. So, the movie clearly promotes the radical LGBT agenda with fervor.

Director and writer Tim Federle confirmed the intentionality of the movie’s message in an interview with OUT Magazine. “I mostly think it’s a tremendous honor,” he said, “and what I try to do is clear the way for the next generation. I think there’s a lot of queer people and a lot of queer energy within the Disney company because it’s a company that, at its best, teaches the values of optimism and inclusion and love and hope and music. Many of those qualities are fundamental to the queer experience. I think I’m just one voice of many who are trying to tell stories authentically with a lot of hope.”

Beyond BETTER NATE THAN EVER’s obvious pro-homosexual, cross-dressing slant, the movie’s few redeeming qualities are marred by Nate’s insistence on putting his own desires above those around him. Nate never truly grows or changes. Instead, the people around him must change. Nate’s self-worth and identity are based on how others perceive him and the success that he earns.

The true danger that BETTER NATE THAN EVER presents to young viewers is the idea that identity and self-worth ultimately come from within oneself. In reality, true identity comes from the knowledge that we are created by a just and righteous God who loves truth, his creation and his children.

To sum up, BETTER NATE THAN EVER has a strong non-Christian, Romantic, politically correct, pro-homosexual worldview. It encourages children to find and be who they are, without any shame, even if it means lying to and disobeying their parents. This is coupled with the title character’s effeminate ways and homosexual tendencies. BETTER NATE THAN EVER does have some minor moral, redemptive elements stressing family, forgiveness and love. However, MOVIEGUIDE® thinks media-wise parents and their families will want to skip this movie musical entirely because of its offensive, perverse political agenda and encouragement of teenage rebellion.