A Loud Shout-Out for THE QUIET MAN 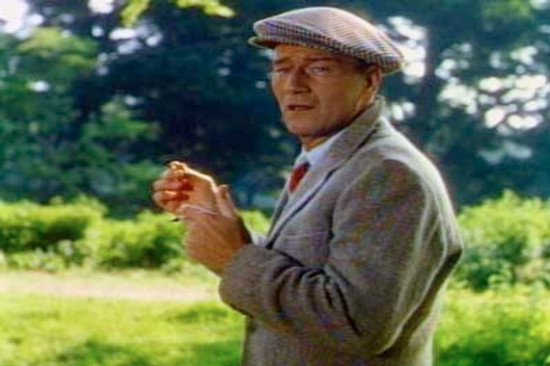 f you’re looking for a good movie to celebrate St. Patrick’s Day today, you can’t go wrong by renting or buying a copy of the 1952 Oscar-winning classic, THE QUIET MAN. It’s my own favorite movie for St. Patrick’s Day, and one of my

favorite movies, and favorite comedies, of all time.

Directed by the talented John Ford and starring the equally talented John Wayne, Maureen O’Hara with the red flaming hair, Barry Fitzgerald, Victor McLaglen, Mildred Natwick, and Ward Bond, THE QUIET MAN is a delightful bit of hilarious Irish blarney that also gives a wonderful presentation of the give and take that a marriage needs to succeed.

In the story, John Wayne plays Sean Thornton, a reluctant ex-boxer from America who comes home to his family’s ancestral home in Inisfree, Ireland. Immediately, he tries to buy his mother’s old homestead, but runs afoul of “Red” Will Danaher (Victor McLaglen), who’s been trying to buy the homestead from the Widow Sarah Tillane (Mildred Natwick) for years. Will wants to buy the estate because he wants to marry the Widow Tillane, and the home where Sean was born sits right between the Widow’s estate and the Danaher farm.

At the same time, Sean spies a pretty Irish lass with flaming red hair (Maureen O’Hara), and he’s thinking about courting her. The trouble is, the Irish lass with the beautiful hair just happens to be Will Danaher’s sister, Mary Kate.

Can Sean overcome his mysterious fear of fighting to calm the mean brother, win Mary Kate’s hand in marriage and become part of the Irish town he loves so much?

THE QUIET MAN is a wonderfully winsome, beautifully photographed, colorful, warm, poignant, and funny masterpiece, brilliantly directed by John Ford, who won the Oscar for Best Director, one of his greatest triumphs. It has some of the greatest visual set-pieces ever put on film, including the famous kiss between John Wayne and Maureen O’Hara that Steven Spielberg used to such brilliant effect in E.T.

This is just a fun, thoroughly delightful movie. There are a couple comical references to the marriage bed for older teenagers and adults and some roughhouse play and fighting, but other than that, this is a pretty clean movie for families. Best of all, besides the movie’s magical, morally uplifting view of the give and take required between people intending on courting and getting married, THE QUIET MAN offers a very positive portrayal of two Christian leaders, a Catholic priest played by Ward Bond and a Protestant vicar played by Arthur Shields, the Rev. Playfair. In fact, the reverend’s name becomes an important symbol in the plot about Sean’s reluctance to stand up to, much less fight, his ill-tempered, would-be brother-in-law. And, although this is clearly a Catholic movie, the priest does a kind act for the Protestant pastor at the end of the movie that’s a model of Christian charity and that shows how the two faith communities can be united in spirit if not always in doctrine.

You do yourself a big disfavor if you’ve never seen this enjoyable, heartwarming movie or don’t have it in your personal home library.