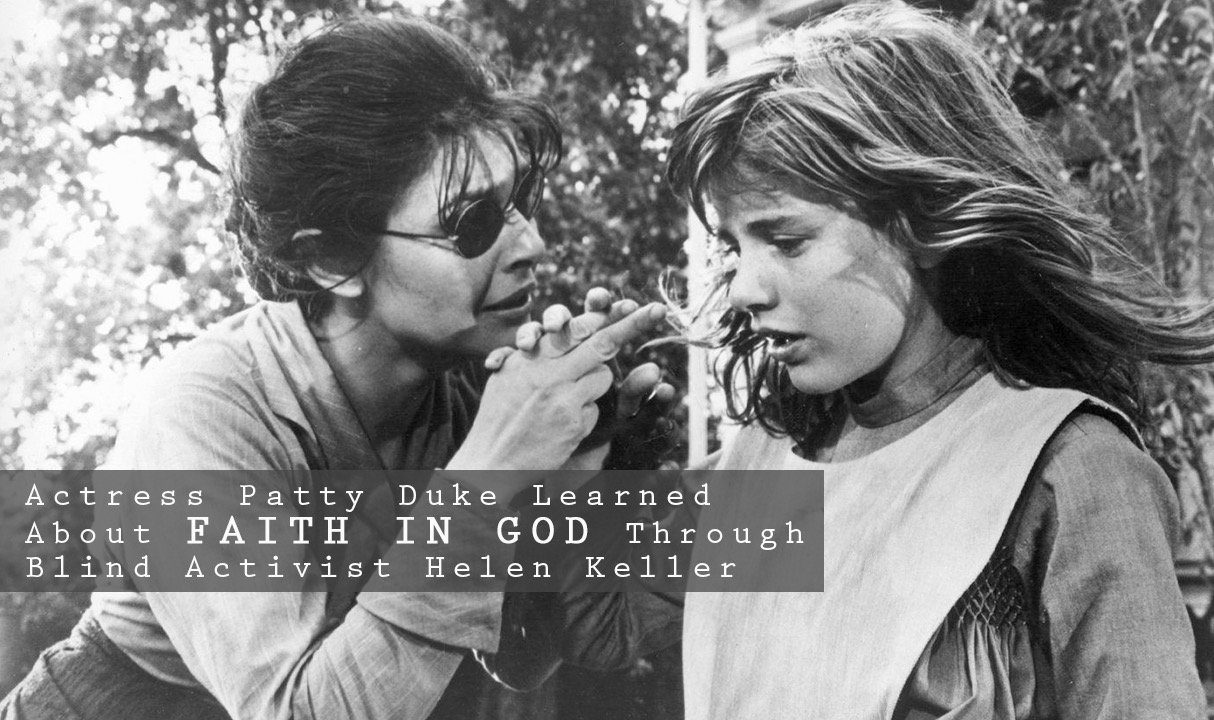 In the last few years, we lost many remarkable actors. One was Patty Duke, who was a notable American actress of stage, film and television. She won an Academy Award at 16 for her role as Helen Keller in THE MIRACLE WORKER in 1962, a role she had first performed on Broadway, where it won the Tony Award for Best Play.

A year later, she starred in her own TV show, THE PATTY DUKE SHOW, where she played identical cousins.

In 1982, doctors diagnosed Patty with bipolar disorder, and she became an advocate for mental health issues.

Guideposts reported how in 1963, Patty Duke explained that playing Helen Keller helped strengthen her faith. Patty told of a conversation with her manager and acting coach, John Ross.

Reportedly, Ross said, “You’ve done that with the wild young Helen Keller, but you must know how the child grew to be one of the world’s great women by mastering her handicaps and fears. Try thinking of yourself in this role, too.”

“But, how did she get rid of her fears?” Patty asked.

“She put herself in God’s hands,” Ross said simply.

“Why should she?” she asked.

“Because she knew that she was helpless to help herself. Helen Keller was desperately afraid, too, but she knew that if God, who created her, was a loving Father, He was surely going to help her if she asked Him to. And, when she put herself in His care, she found new strength.”

“When Helen Keller grew up and became a famous woman, she wrote that she made the most wonderful discovery of her life when she was 16. These are her words:

“We are never happy unless our hearts are filled with the sun which never dissolves into gloom. God is that sun, and if our faith in Him is strong, whether we are blind or seeing, He will somehow reveal our powers and brighten the darkest days with His divine beams.’”

Patty then explained, “I took all that to bed with me to think about. And, the more I thought, the clearer it became. The blind children in the cast were without fear because they trusted God.

“Little by little, I discovered that when I forgot myself and trusted a God who loves me then I was not nearly as afraid as before.”

In another interview for Franciscanmedia.com, Patty Duke at 68 was still enjoying her sixth decade as a professional actor.

She said, “I’ve been richly blessed…. When I pray, I never ask for material things. I offer only prayers of gratitude.”

Patty talked about her youth.

“More than anything else,” she said, “I wanted to be a nun…. My friends and I would play ‘nun’ all the time. We would wrap a piece of loose-leaf paper around our forehead and neck, put a dark scarf around our head, and we would play school, taking turns being the teacher or the mother superior.”

Her father, a former Navy man, battled with alcohol and left the family, when Patti (referring to herself with her given name of Anna) was 6-years-old.

“I rarely saw him after he left. I promised myself that when I was older, I would find him and make him better,” she said.

Patty remembered her mother as a “loving and terrific mom,” although her mother, Frances Duke, struggled with frequent episodes of severe depression and several hospitalizations.

“My mother depended upon going to church, praying… to help her deal with her depression. We didn’t have the knowledge, the treatments back then.”

At age 7, Patty caught the attention of John and Ethel Ross, who as a husband-and-wife team of talent agents became devoted to her. According to Patty, however, they were very controlling.

“The managers did not think that my name was perky enough, so they decided to change it,” Patty recalled. “Without any discussion, they barked out the order to me saying, ‘All righty, Anna Marie is dead. You’re Patty now.’” In later years, Patty defined this event as the beginning of her path to personal destruction.

Anna told, “The managers said to my mother, ‘Now, Mrs. Duke, you know that you are unable to take care of your daughter…. If you really love her, you will let her live with us so that we can give her everything you cannot.’”

For nearly 10 years, until age 18, Anna lived with her managers in their Manhattan apartment. She slept on a cot in a hallway. Her every word and movement were monitored and controlled. Her daily actions were reviewed and critiqued each evening at dinner. She could not talk on the telephone, or have any friendships. She could only use the bathroom for 10 minutes at a time.

According to Patty, the Rosses were addicted to alcohol and prescription drugs and would periodically give them to her to help her get through her demanding workload.

After she turned 18, Patty severed ties with her managers and learned that they had squandered most of her earnings. However, Patty says, “I didn’t care about the money… I was just happy to be free of them.”

Within a few months of leaving her managers, Patty’s personal life began to unravel and spin out of control for 17 years with extreme euphoria, deep depression, suicide attempts, delusions, wild spending, violent outbursts, and broken relationships. She was hospitalized on several occasions.

She became the mother of two boys, actors Sean Astin and Mackenzie Astin. They lived most of their childhood not knowing which mother they would experience when they were with her.

In 1981, at age 35, Patty was diagnosed with bipolar disorder. With proper care, she began to enjoy a more normal, balanced life.

She said, “It was like a rebirth, a resurrection… One of my greatest blessings has been the right diagnosis, the right doctor, and the right treatment.”

She then began to allow herself to be touched by God’s grace and forgiveness.

Patty said, “For me, forgiveness has been key…. In forgiving, I have eased my own burden, and this allows me to generate more love, to live and do as Jesus, who is all about love.”

She told, “I realized that true forgiveness meant I had to not only forgive the managers with all my heart, which I do completely, but also I had to ask God for forgiveness for them. I believe that when they started they had the best of intentions, but they were ill-equipped to deal with a child, and as they got sicker and more addicted, their actions and thoughts became all distorted…. I understand that if they had been in their right minds, they would not have acted that way.”

Patty also begged to be forgiven by others.

She said, “I went back to as many people as I could remember whom I had hurt or offended in some way during that dark time and asked for forgiveness.”

Patty and her mother persisted to receive correct diagnoses and treatments and were able to experience a relationship of love and respect. Frances Duke lived the last 15 years of her life with Patty.

Patty said, “They tried to break us apart, but they couldn’t. Our relationship became almost too good to be true.”

Amazingly, despite her troubles, Patty’s career continued to soar. Her illness didn’t seem to affect her ability to manage one acclaimed performance after another. She starred in almost 100 television productions, as well as receiving Emmy Awards, Golden Globe Awards and her Oscar for best supporting actress for THE MIRACLE WORKER.

Her work also included several faith-based roles in TOUCHED BY AN ANGEL, AMAZING GRACE and INSIGHT. She raised money for the poor and traveled to Africa. She began to focus on advancing awareness of and support for mental health. Twice, she has appeared before Congress as a mental health advocate.

“We need to get to a place where we can teach people to take care of themselves,” she said, “so they don’t act in destructive ways toward others and toward themselves.”

In her best-selling autobiography, CALL ME ANNA, in 1987, she was one of the first celebrities to be public about her own mental illness.

Patty said, “The relief at getting well and the passion for not keeping it a secret overrode any stigma or backlash possible…. Most people in and out of the industry have been incredibly supportive.” The industry was supportive because they twice voted her president of the Screen Actors Guild.

Reflecting back on her life, Patty said, “No role or award could compare with meeting the real Helen Keller…. It was everything you could imagine. It was a religious experience. My first sight of her, she was coming down this long flight of stairs in this magnificent blue dress that matched her gorgeous blue eyes. She made this grand entrance. If I had not been in THE MIRACLE WORKER and met Helen Keller, I don’t know what my life would have been because they set the bar for the rest of my career and my life.”

Editor’s Note:  Although Helen Keller expressed belief in God, she was a follower of Emmanual Swedenborg, a mystic who didn’t believe in the Holy Trinity or the sacrificial atonement of Jesus Christ for people’s sins. Keller was also a member of the Socialist Party in America. In an interview three years before she died, Anna Patty Duke Pearce’s son, Sean Astin said his mother “probably” identifies most closely with the Catholic Church. However, upon her death in 2016, a public memorial service was held for her at Lake City Church in Coeur D’alene, Idaho, a non-denominational Trinitarian church.