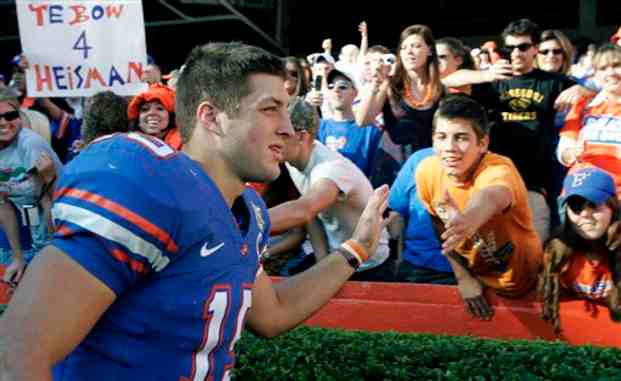 TITLE: THROUGH MY EYES

REVIEW: Tim Tebow, a quarterback for the Denver Broncos in the National Football League, is a very divisive young man. He won a Heisman Trophy, was part of two national champion college football teams and wears his Christian beliefs on his sleeve. Many people love him, many hate him, but for anyone who follows football, he’s hard to ignore.

Even before his birth Tim became controversial. The 2011 Super Bowl featured an ad with Tim’s mother telling about doctors who recommended he be aborted because of her complicated pregnancy. Obviously, he was not.

As a child, he stirred controversy because he was home schooled. Schools want athletes who can help them win championships, but they prefer that they attend classes at their school. Again and again, Tim turns ridicule into respect by the way he responds.

Tim makes it clear in this autobiography he knows he’s often not the most talented player in a typical game, but he’s determined to be the most prepared. You can get sore just reading about his workouts, and there’s not a planning meeting he doesn’t wish to be a part. One of his mottos is, “Hard work beats talent when talent doesn’t work as hard.” He is a leader, first by example, then by encouragement.

Brought up on a farm, he jokes about being “farmer strong.” Far from pampered, his parents occasionally loaned him out to a chicken-farming neighbor to do long days of some of the nastiest work you can imagine (for chickenfeed).

As a young man with armies of female admirers, he has publically answered reporters questions saying he is saving himself for marriage. Also, he tells how he carefully nursed his beloved dog Otis back to health after he had been horribly abused by someone else.

Tim and his family see sports as a means to create a platform to be a greater witness for Jesus Christ. Tim has used this platform in many ways, from prison crusades to raising money for orphans in the Philippines.

What makes this book worth reading is not the many good qualities and athletic achievements Tim covers. It’s the message that you can be better at whatever you’re doing by applying the biblical principles Tim applies. Whether you’re raising children, writing software or making movies, you can do better if you do what God gives you to do, with all your heart, to honor Him.

This book would make a great gift to young people. Tim Tebow has shown that he can lead teammates to excel. His book will no doubt lead many young people to excel as well.

REVIEWER’S NOTE: This is the first book I’ve purchased and read on an iPad. I enjoyed the clarity of type on a backlit screen. I’m frustrated that I can’t pass my hard copy of the book on to a friend or family member for them to read. The downloadable version went for $12.99 while the hardback edition is available new for $14.30. I’d think actually printing a book would cost more than $1.31.