Duke Ellington and the Christian Origins of Jazz 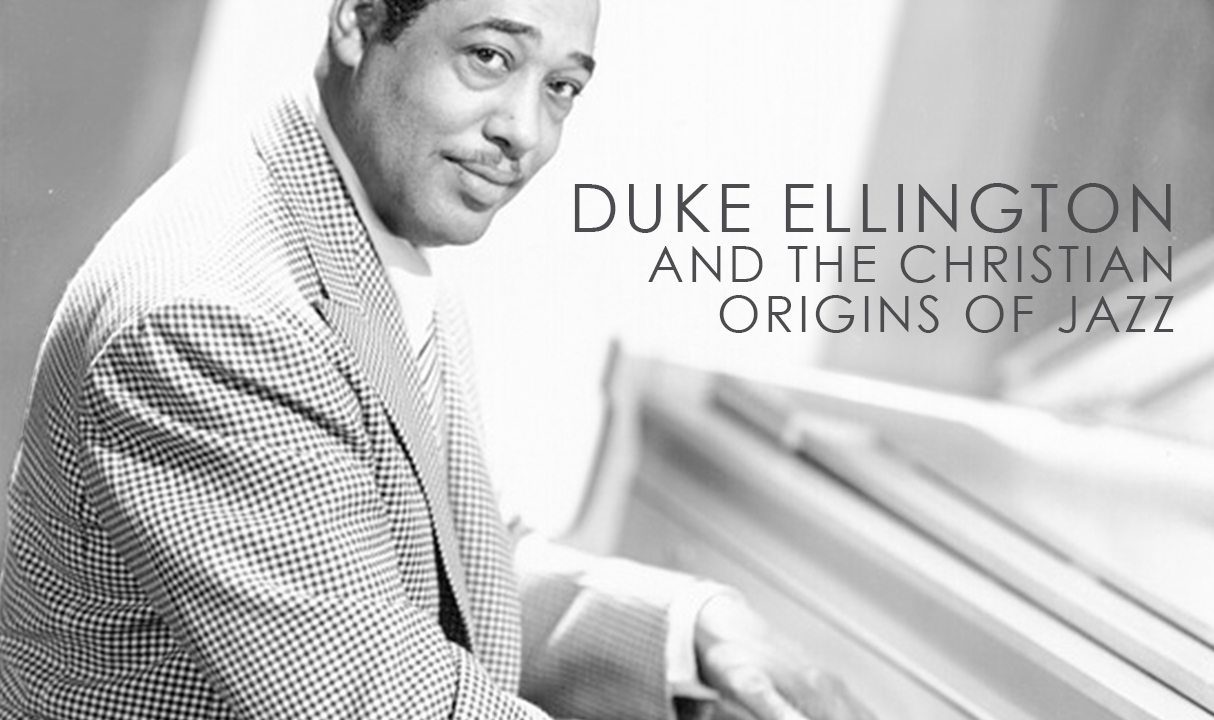 Duke Ellington and the Christian Origins of Jazz

Duke Ellington (1899-1974), the famous jazz pianist and orchestra leader, gave prolific artistic gifts to America and the world. His list of movie and musical recordings is amazing.

“Buddy Bolden, credited (by legend) as the originator of jazz, was a regular churchgoer. According to one friend, ‘That’s where he got his idea of jazz music.’ Louis Armstrong, baptized a Catholic but ecumenical in religious matters, also turned to spirituals for inspiration. He single-handedly transformed ‘When the Saints Go Marching In’ from a Christian hymn to the very emblem of the jazz life. The other founding father of jazz, Jelly Roll Morton, is famous for inventing the whole mythos of jazz and prostitution, but was also a ‘very devout Catholic,’ according to his longtime companion Anita Gonzales. His burial marker excludes all musical imagery, instead featuring an elaborate rosary with all fifty-nine beads clearly demarcated.”

Duke Ellington, who led his own orchestra by 1918, was no exception.

In a February 1971 article in GUIDEPOSTS (https://www.guideposts.org/faith-and-prayer/prayer-stories/power-of-prayer/guideposts-classics-duke-ellington-on-his-path-of, Ellington shared how his “sounds of praise came from his heart.” He tells how when his mother died in 1935 that he lost all ambition and how when his father died a few years later that the bottom dropped out of his life. He says he was in intense grief. He shares how his parents took them to their churches. His father’s church was Methodist and his mother’s was Baptist.

“They left me such a heritage of belief,” he says, “that after they were gone, it was natural I should turn to the Bible for help, again. I read it through four times. That took over two years. . . . After studying the Scriptures, I found a new awareness of how to meet my problems, how to deal with my fellowman, and how to bring God further into my work.”

Prayer was a very important part of his life, Ellington wrote.

“One sure way I know to meet my problems is prayer. I pray regularly, when I arise, when I retire. I pray my thanks for whatever He gives me: a thought, a bar of music, food. I believe I am helped by prayer. It makes me aware of my total dependence on Him.

“We all belong to Him in the first place. I figure that when we’re born we are only given a lease, that’s all. We’re accountable to Him at the end of the lease time. We’re not supposed to arrive at the end all scarred up by anger and hurt and self-pity. My grief left when it came to me that past a certain point, it’s a sin to grieve.”

Ellington says he believes music is his calling from God.

“My feeling is that God gives each of us a role to play in life,” he wrote. “Mine is music. The first piece I ever wrote was ‘Soda Fountain Rag.’ I was 15 and jerking soda in the Poodle Dog Care in Washington, D.C., my home town. Since then, there have been many thousands of pieces, many of them called sacred music.

Duke Ellington wrote show tunes and sacred music. Some of his sacred music is on You Tube from a 1965 concert at Grace Cathedral.

At the concert, titled “A Concert of Sacred Music,” Ellington told the 2500 people in attendance, “In this program you hear a statement without words, but I think you should know that it is a statement with six tones symbolizing the six syllables in the first four words of the Bible, ‘In the beginning God. . ..’”

The concert opened and closed with “Praise God,” based on the 150th Psalm.

“In the program,” Ellington says, “I tried new songs and new instrumental works, “Supreme Being” and “Something About Believing” and “Almighty God.” The trumpet preached a solo. A fire-and-brimstone sermonette came from the percussion section. When we reached the closing, “Praise God,” the audience was on its feet and stayed there through a whole acapella rendition of ‘The Lord’s Prayer.’”

One news story about this concert began, “Duke Ellington talked to the Lord in Grace Cathedral last night.”

Ellington says, “All of us, every listener, every member of the band and chorus were talking to the Lord that night. Since then we have done sacred concerts in more than 50 houses of worship in America and Europe. When the church is too small, we go into a hall. One church found the 200 voices in the chorus too much, so the church rented a ball park. The chorus need be only 20 voices. In a church, the band and chorus are arranged in the sanctuary. The bishop, minister, priest or rabbi usually address the congregation before we begin.

“The sacred concerts do not take the place of worship in the ordinary manner,” Ellington adds. “But, the music I write for them is and always was an act of worship. From the very beginning, it was a response to a growing sense of obligation to myself in self-defense through the Almighty. It continues to be an expression of God in my life. I am only saying in music what I have been saying on my knees for a long time.”