Things You Need To Know About the New EXODUS Movie 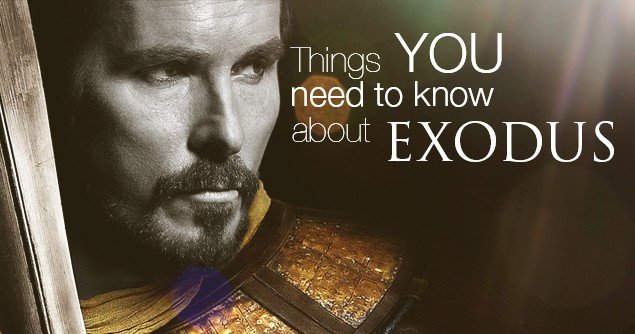 Things You Need To Know About the New EXODUS Movie

EXODUS:  GODS AND KINGS is the next attempt to do a large budget, Hollywood studio, biblical epic.

EXODUS stars Christian Bale as Moses and is directed by Ridley Scott, the director behind ALIEN, BLADERUNNER, BLACK HAWK DOWN, and PROMETHEUS. So now every Christian wants to know, is EXODUS going to be Biblical? Well, we can’t really say just yet, but what we can say is that it seems very Ridley Scott, with a plotline about God’s destiny.

At a press conference Tuesday (Sept. 30) in Hollywood, Christian Bale spoke to MOVIEGUIDE® for some time and gave his perspective.

He and Ridley Scott had wanted to work together, and Scott called up Bale one day to say, “I’ve got something – Moses.”

“With swords and sandals?” Bale asked.

Before taking on the project, Bale said he had “no idea about Moses,” but he took some time to read the Bible, the Torah, the Koran, and some other material.

“The biggest surprise to me,” he said, “was the nature of God, and Moses talks directly to God.”

Going on about what Bale took out of his readings to play Moses, he says Moses “fought being chosen by God. He kept trying to get out of the gig on the mountain. You can imagine this is not an easy job, but he just kept desperately trying to move forward because of the enormous pressure this is on him.”

“MOVIEGUIDE® can’t say for certain if this movie will be completely accurate,” Publisher Dr. Ted Baehr said. “However, what we have found from these Hollywood Biblical epics is that, because of them, more and more people are reading their Bibles.

“This is an incredibly good thing,” he added, “and we must not look towards man, celebrity, or Hollywood, but rather, God, for wisdom.”

Make sure to check back at MOVIEGUIDE®, www.movieguide.org, for the latest news about EXODUS and many other movies and TV programs being marketed to you and your family.