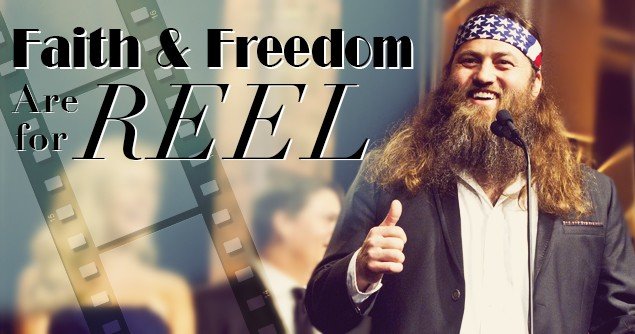 Faith & Freedom Are for Reel:

Early Contenders Lining Up for Movieguide®’s

Hollywood, Calif. – Early contenders are lining up to be nominated for the 23rd Annual Faith & Values Awards Gala and Report to the Entertainment Industry, sponsored by Movieguide®:  The Family Guide to Movies and Entertainment and the Christian Film & Television Commission®.

The event will be held Friday, Feb. 6, 2015 at the Universal Hilton Hotel near the heart of Hollywood.

“Faith-based movies are having one of their best years ever,” Movieguide® Founder and Publisher Dr. Ted Baehr noted. “And, movies about heroic superheroes and movies for families remain the most popular movies both here and overseas.”

The evening’s highlight will be the presentation of the two $100,000 Epiphany Prizes for Inspiring Movies & TV, which honors the best movie and best television program in 2014 that “greatly increases man’s love or understanding of God.”

Last year, with additional support from the Templeton Foundation, the Awards Gala added another screenwriting competition, the $50,000 Chronos Prizes for Inspiring Screenplays by Established Filmmakers. Visit www.chronosprize.com for criteria and submission forms.

Previous winners at the Gala have been LES MISÉRABLES, UP, FINDING NEMO, THE PASSION OF THE CHRIST, MARVEL’S THE AVENGERS, THE LORD OF THE RINGS:  THE RETURN OF THE KING, THE CHRONICLES OF NARNIA:  THE LION, THE WITCH AND THE WARDROBE, FIREPROOF, AMAZING GRACE, AMISTAD, THE PREACHER’S WIFE, AMISH GRACE, TOUCHED BY AN ANGEL, 7TH HEAVEN, JAG, DOC, Robert Duvall, Stephen Collins, Whoopi Goldberg, Jim Caviezel, Chuck Norris, and Shirley Jones.

At the Gala, Dr. Baehr will present highlights from Movieguide®’s Annual Report to the Entertainment Industry, which each year examines how well family movies and movies with faith-based, moral and spiritually uplifting content did at the box office and on home video compared to other kinds of movies.