Monkeys, Curses, Ghost Zombies, and Johnny Depp: Behind the Scenes of the New PIRATES Movie, DEAD MEN TELL NO TALES 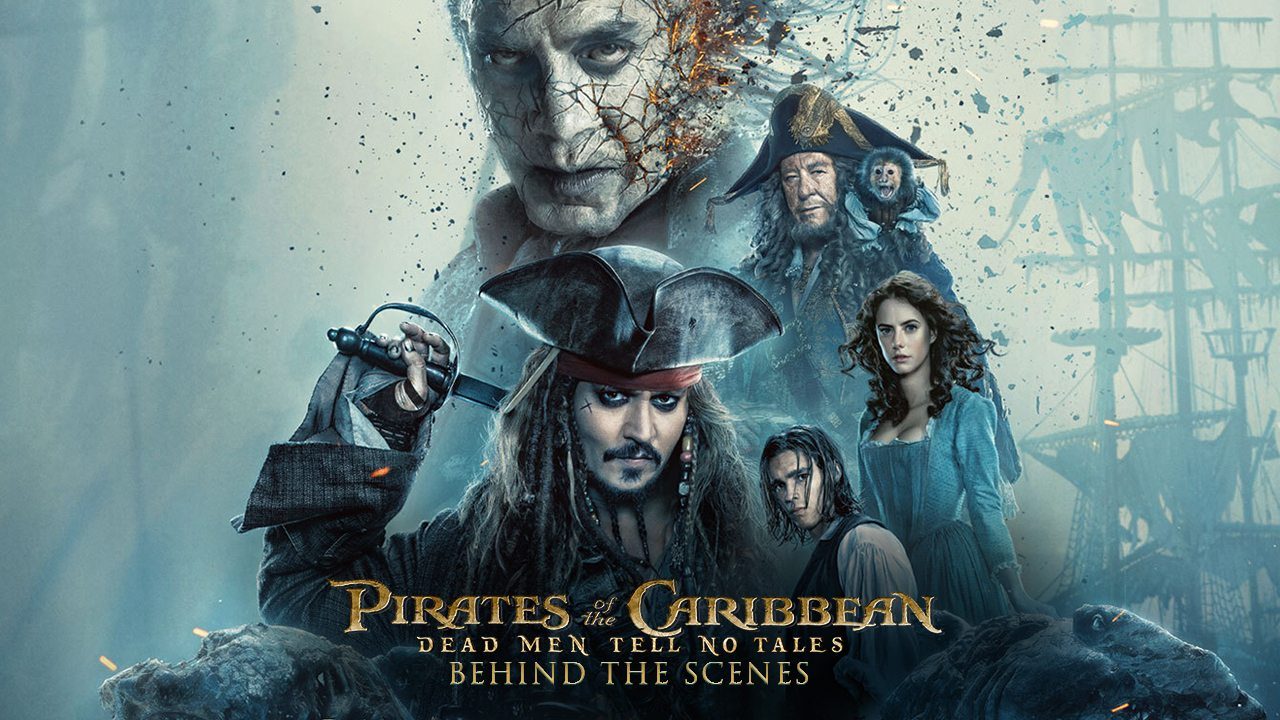 Behind the Scenes of the New PIRATES Movie, DEAD MEN TELL NO TALES

MOVIEGUIDE® attended a special press conference last Saturday for the new PIRATES OF THE CARIBBEAN movie, whose subtitle is DEAD MEN TELL NO TALES.

The movie tells an exciting, redemptive story full of comedy, adventure, heart, and scary zombie ghost pirates. In the story, the son of Will Turner and Elizabeth Swann is trying to free his father from the curse of the Flying Dutchman and gets help from a female scientist trying to honor her own father. They need Jack Sparrow’s help in finding an object that may be able to break the curse. Meanwhile, a cursed Spanish captain (played by Javier Bardem) hunts down Jack Sparrow for revenge.

“When I first read the script, I went back and looked at all the other films,” Rush said. “You need a therapist to work through what he’s [Barbossa’s] been hiding. The bottom line for Barbossa is, as bad as he is, I like there being something that might reveal a vulnerability or a doubt [in his character].

“The whole film is about parents and children,” Rush added. “That’s quite a deep thought.”

Of course, as the first movie revealed, the back story to Barbossa’s life is that he mutinied against Capt. Jack Sparrow and took the ship The Black Pearl from Jack.

“It’s like The Black Pearl is the most beautiful woman in the world,” Rush said, “and we’re fighting over the same girlfriend.”

Speaking of Johnny Depp’s approach to playing Jack Sparrow, Rush said, “He does occasionally throw in some lines out of nowhere. I loved in the scene [in DEAD MEN TELL NO TALES] where he’s shanghaied into the marriage. . . . Thankfully, Hector [Barbossa] turns up and. . . says, ‘Jack, I knew we’d meet again,’ and Johnny adlibbed a line, a complete non-sequitur, and said, ‘Did you bring me a present?’ That’s so Johnny, that’s so Jack, that kind of irreverence, absurdity. It’s a smokescreen that Jack Sparrow uses. You don’t know if he’s the greatest, luckiest hero of all time or a complete idiot.”

Rush added that he thinks Jack Sparrow is an “existential outlaw” character, who’s always “living in the moment.”

“He has that special compass that says go in this direction. It’s that desire to I’ll take my chances, I’ll meet the moment. Audiences find that very attractive. Kids dress up as pirates, even when pirates weren’t in pop culture. They love the sword and the hat. You get to expand your personality. Barbossa’s hat is very important. Where’s the vanity? It’s in the brain.”

“The monkey’s trained so brilliantly. The monkey’s trained to have no relationship with me whatsoever. If I pull a sword out, it might get scared. So, the monkey relates only to the trainers. There’s a comfort zone for me. Every time the monkey’s on my shoulder, I get this warm little aromatic peanut breath in every scene; and, it’s adorable.”

“Any movie is daunting,” Co-Director Joachim Rønning said. “Any movie is a challenge. Every movie you do gives you a little bit more experience. KON-TIKI was difficult to make – logistically and shooting on the open ocean. In some sense, it prepared us for complex moviemaking. This is as big as it comes. So, going into something like this is always going to be daunting, and you better be prepared.”

“We loved the franchise in the first place,” Co-Director Espen Sandberg said, “especially the first one because that was such an impactful film. The audience was surprised all over the world, because it had a really unique tone. It had spectacle and humor and horror and heart. That’s also what we wanted this one to have. We wanted it to be really fun and physical, but we also wanted it to be really emotionally strong. We wanted to create really strong arcs for all the characters. So, then, we wanted to make a back story for it.”

“We [wanted] to get some look into the Jack Sparrow origins, and how he became Jack Sparrow,” Joachim said. “We worked with the screenwriter. We were dependent upon the computer technology to do it.”

How was it working with renowned Producer Jerry Bruckheimer?

“He’s amazing,” Joachim said. “Very director friendly. Very creative friendly. He will never ever force any opinion or change into the process. It’s very collaborative. He has for sure strong opinions, but he also has an amazing intuition for what the audience wants. It comes from 40 years of making big hits globally, so we always listen. He’s usually right.”

Espen, “It’s a family film franchise, and it’s something that we know a little bit about because [Joachim’s] a dad, I’m a dad. It’s interesting to explore. We wanted that strong emotional core, because it just makes the whole experience more meaningful.”

Producer Jerry Bruckheimer described the different duties of a producer versus a director.

“They’re the captain of the ship,” he said. “We build the ship but they have to pilot it. You want to support them.”

What did he see in these two particular film directors?

“It’s always about their work,” Bruckheimer explained, “and how they view the PIRATES script, what their ideas are. You can see they’re master filmmakers. In Hollywood, there are so many people who can talk the talk. They’re great salesmen, but when you get them out there, they can’t deliver. But, if you see the work, then you can know they’re the real thing.”

Bruckheimer discussed what makes Jack Sparrow and Johnny Depp’s portrayal of him so different and sensational.

“First of all, he’s a charismatic actor,” he said. “Start there. He’s irreverent, the character’s totally irreverent. He gets up in the morning and does whatever he wants. He doesn’t have a care in the world. What’s so interesting about Jack Sparrow is that, in Hollywood, when you sit in all these script development meetings with writers, they all talk about character arcs, but Jack Sparrow has no character arc. He says whatever he wants to say, no matter how dumb it is. He drives each movie.

“Audiences just want to be in Jack Sparrow’s world, Bruckheimer added. “There’s always somebody chasing him for what he did. He’s the heart and soul of the franchise.”

Bruckheimer recalled 15 years ago when they started working on the first PIRATES movie.

“When I took on a movie about a theme park ride, I thought my career was it, I’m done. Especially in the light that COUNTRY BEARS failed, HAUNTED MANSION failed. So, you never know. By the way, the public, the media were killing us. Also, Johnny Depp had never made such a big movie.”

What really convinced him the movie could work, however, was the script, because, in the story, instead of stealing the treasure, the characters had to return the treasure.

“It was like turning it on its ear, making something fresh and new,” he noted. “That was a good script! [Making movies is] always about getting the story right. You try to have it make sense. It took us a long time to figure [this one] out.”

Johnny Depp was involved in the process, Bruckheimer added, because his character is so pivotal to each PIRATES movie.

“He was very generous with his time,” he said.

Bruckheimer discussed the things he loves most about the characters in the PIRATES movies.

“These characters just do whatever they want. They have no morals, or even a small amount of morals. They do what they want when they want to do it. They don’t have to get up and go to school in the morning, or get their work done. They’re just fun-loving characters. I love having strong characters in a movie. I hope they let us make another one.”

Did he like pirate movies when he was a little boy?

“I sure did. Errol Flynn and John Barrymore. . .. Every director we worked with always referenced those films.”

Bruckheimer discussed the challenges of making a movie in today’s Hollywood.

“Name recognition in our business is so important because there’s so much clutter. So, if there’s name recognition, it catches your eye right away. When they do tests of your movie, you get these sheets telling how high your movie is. When that number is high, you have a better chance.”

Actor Javier Bardem said one of the things he likes most is researching his characters. Playing the zombie ghost of a Spanish sea captain, who hates all pirates and wants revenge against Jack Sparrow, took him to Spain.

He described the villain he plays in the movie as a “raging bull.” For him, the character’s primary theme was “how painful rage is.”

Regarding working with Johnny Depp, Bardem said, “Everything he does on set is brilliant. He will never let you down. He likes jokes, though, but he always does it in a very, very respectful way. The success of the franchise belongs to the Jack Sparrow character. We like this character. He’s irreverent, he’s funny, he’s free.”