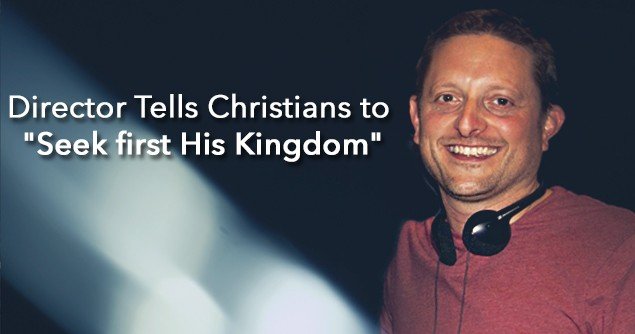 Dr. Ted Baehr sat down with Director Brad Silverman to hear how God radically changed his life and called him to make movies with a purpose. Read the encouraging conversation below.

Dr. Baehr: Hello, I’m Ted Baehr, publisher of MovieGuide and I’m here with one of my favorite directors, who won our $100,000 Epiphany Prize for Grace Unplugged, Brad Silverman. You do a great job.

Brad: Thank you very much. What a privilege to be here today, and what a wonderful and memorable night at MovieGuide.

Dr. Baehr: Yes, and I know we’ve interviewed you before, we’ve put you on stage before, but I want to go a little deeper. Just how you’ve lived in Hollywood when your life changed after you had a spiritual experience and came to Christ.

Brad: I was in my early to mid-twenties. I’m of Jewish background. A dear friend just started dialoguing with me about, really at that time, the Jewish roots of the Scriptures, which, ironically, was very foreign to me. I really didn’t know the origins of the Scriptures were of such Jewish influence.

Over the next three, four years, as our friendship grew, the Lord just broke me. Or I should say this: He allowed me to sort of achieve the effects of me running the show, and I just ran myself right into a brick wall. So, I came to faith in Christ, and just walked away from the entertainment industry for about a decade. My career was actually just starting to go somewhere as a writer/director and I walked away for about a decade. I wanted to go into full time ministry, and thought that’s where the Lord was taking me until about four or five years ago, when I felt Him calling me to start making movies again.

Dr. Baehr: How has God sustained you or worked in your process of doing this?

Brad: Well, when I got back into the film business, I had nothing to lose. If you told me today, ‘You can never make movies again’ if it meant compromising what I believe to be honoring to God, the answer is no. I walk away. So we did a film a few years back, and then did “Grace Unplugged”, and it was sort of like I’d rather not make movies than make movies that I feel dishonor God and the Scriptures.

Dr. Baehr: So what’s your favorite part of the industry? What do you like about it?

Brad: I think my favorite part—it may sound a little hokey, I guess—but I really enjoy the team-building process.

Brad: I really do enjoy the collaborative process, especially the privilege of being a director is that no one really tells me what to do, which has its positives and negatives, but I love the “let’s build a team, let’s create an environment, let’s create a culture where we can truly try to build each other up from the ground up.” It sounds so silly, but when we eat on set, I’ll go sit with the interns, and they think it’s interesting. The interns think, “Oh wow, the director is sitting with us.” I’m going, “It’s just me,” but all that’s to say I love building that culture of teamwork and that kind of thing.

Brad: Maybe it’s just a philosophy of mine, like “No, you have to be in the trenches.” How dare I do that? How dare I expect someone to do something that I’m not willing to do? Same thing with the actors. I think—you know, I try to encourage them to be a part of this family. Look, you’re making a movie. It’s hard work, let’s have fun, let’s make it a family environment. I believe that in that we have so many opportunities to share Christ and speak the truth into people’s lives.

Dr. Baehr: This is contrary to what most people think about the industry. They think the entertainment industry is a bunch of people who just are aimless. You know, you’ve got focus. You’ve got a family; you’ve got children.

Brad: Well you know if I may speak boldly, “seek first His kingdom and His righteousness and then all the other things will come.” You can edit this out if you don’t like it, but my priority is the Lord, and everything transfers from that. Everything stems from that, and that’s my focus. I’m not ashamed of the Gospel, and I know that that may limit certain opportunities I have, but so be it. I just have to be true to who I am and who the Lord has made me to be.